For some, birthday parties are a chance to bring all your friends from different parts of your life together. For others, like one creative and computer-skilled Reddit user, birthdays are a chance to create a work of art — and celebrate, well, yourself.

In a post shared to the /r/funny Subreddit on the internet forum on Monday, user The_Argentine_Pace uploaded an image of a living room and kitchen filled with people hanging out. Well, at first it looks like there are a bunch of guys hanging out. But the more you focus in on the individuals in the photo — sprawled napping on a couch, typing on a computer, downing a beer, chatting over drinks, lovingly petting a cat — the more you realize that they’re actually all the same guy.

“Yesterday was my birthday so I threw myself a party,” he captioned the digital art piece.

In response to comments, he explained his process further, noting that it took “quite a while.” “I used my phone and it can take a picture by audio, so I’ll say something and it takes the picture,” he continued. He changed clothes and positions for each shot, which is what gives the image its verisimilitude.

He added that he’s not very good at Photoshop, so instead used Photodirector and the old-school standby MS Paint; all in, the editing took “about 7 hours.” That’s dedication.

He also noted that his birthday was April 15. Happy birthday, and may all celebrations be as laser-focused on creating an appropriate homage to yourself. 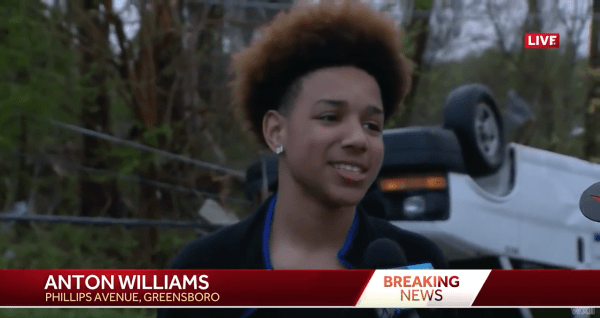 Gamer Teen Unfazed by Tornado That Blew Roof Off Neighbor's House
Next Up: Editor's Pick