Everything You Need to Know About the 2018 World Cup

Miss the Olympics? Another major, international, quadrennial sporting event is underway: the 2018 men’s FIFA World Cup. While you’ll have to wait until 2016 for the World Cup to be held in North America, the event kicked off in Russia on June 14. And the matches have already been intense.

The international soccer competition takes place every four years, with fan favorites like Lionel Messi and Cristiano Ronaldo competing yet again on their country’s behalf. But for the first time in 32 years, the U.S. will not compete in the World Cup after the men’s national team failed to qualify late last year.

Here’s what to know about the 2018 FIFA World Cup.

The 2018 FIFA World Cup is being held in cities throughout Russia from June 14 through July 15. Teams are competing at 12 stadiums in 11 different cities, including Moscow, Saint Petersburg, Sochi, Nizhny Novgorod and Rostov-on-Don, among others.

The opening match, semi-final and final World Cup games are set to be played at the Luzhniki Stadium in Moscow, FIFA announced last year. That stadium can hold around 80,000 spectators.

The final match for the 2018 World Cup is expected to kick off Sunday, July 15.

What are the teams to watch?

Heading into the 2018 World Cup, Germany, Brazil, Belgium and Portugal were among the highest-ranked teams by FIFA in April. Germany returns with hopes of defending its 2014 title, and Portugal’s squad, led by star Cristiano Ronaldo, are hoping to one-up their Euro 2016 win. (Germany, however, will have to catch up: They lost to Mexico in their first qualifying match.) Neymar, a star forward for Brazil, is a dominant force on the field that will help Brazil in its tougher matches. As a captain, Neymar helped propel Brazil to an Olympic gold medal in 2016.

France, Argentina and Spain are also teams to watch heading into the 2018 World Cup. Argentina, however, got a slow start with its preliminary round matches, drawing in its first match against beloved underdog Iceland and losing 0-3 against Croatia.

As with any major sporting event, there’s a chance for a Cinderella story. Iceland is competing in its first-ever World Cup after its stunning Euro 2016 run, and Panama is making its first appearance as well. Notably, Peru also returns to the World Cup for the first time in 36 years.

How exactly does the World Cup work?

First-time watchers or occasional soccer fans may need a quick refresher on how exactly the World Cup works.

After 32 teams qualify for the tournament through whichever of the six FIFA confederations they belong to, officials seed the teams into eight different groups based on their world rankings. In those groups (labeled A through H) four teams square off in preliminary, round-robin matches. Based on those, two teams each will move on to the knock-out stage. As that name suggests, 16 teams in total will compete in elimination matches, moving through quarter-finals, semi-finals and, eventually, the final round.

For the first time since 1986, the U.S. men’s national team won’t compete in the World Cup. The team lost 2-1 in the final qualifying round against Trinidad and Tobago in October 2017.

But the loss wasn’t the only thing that kept the U.S. out of the 2018 World Cup. Wins from Panama and Honduras in their qualifying matches over Costa Rica and Mexico, respectively, secured the U.S.’s missed shot. And U.S. losses against other teams in the CONCACAF (Confederation of North, Central American and Caribbean Association Football) did not bode well for the team’s chances.

Soccer in the U.S. has “been set back by several years” as a result, said Jurgen Klinsmann, who was the team’s coach until November 2016 when he was ousted after its lackluster start, according to ESPN. “That was a huge disappointment.”

The lack of qualification comes after an exciting U.S. run in the 2014 World Cup. In fact, goalkeeper Tim Howard captured headlines when he made a stunning and record-breaking 16 saves against Belgium in the Round of 16. The U.S. went on to lose to Belgium, but Howard was named FIFA’s Man of the Match and excited fans went as far to change Wikipedia’s entry for the U.S. Secretary of Defense to feature Howard.

Why is Russia hosting the 2018 World Cup?

FIFA selected Russia for its 2018 host country as part of a campaign to spread the World Cup to new countries. In 2010, FIFA also selected Qatar as the World Cup’s host city for 2022. “We go to new lands,” Sepp Blatter, the former FIFA president who has since been ousted from his role amid the high-profile bribing scandal, said at the time, according to the New York Times. “Never has the World Cup been in Russia and Eastern Europe, and the Middle East and Arabic world has been waiting for a long time.”

Russia’s bid beat those from England and joint bids from Spain and Portugal, as well as the Netherlands and Belgium.

The Russia bid was riddled in controversy, however, when FIFA investigated claims both Russia and Qatar bribed voters to secure their bids.

Beyond that, there has been growing concern over security as a result of violent clashes incited by Russia soccer fans in recent months. A police officer died from a heart attack after a recent clash incited by Russian fans, according to Reuters. In 2016, violent clashes broke out between Russian and English fans in Marseille during Euro 2016. And in 2017, FIFA President Gianni Infantino said he was “not at all concerned” about potential clashes at the World Cup, according to BBC.

In April, FIFA announced it charged the Russian Football Union with fan racism that came as a result of a match between Russia and France in St. Petersburg earlier this year, the Associated Press reported. Russian fans reportedly targeted black French players with “monkey” chants. And that’s just the latest charge the country has faced with fan racism in Russian soccer.

Alexi Smertin, the Russian Football Union’s anti-discrimination officer, said it was working to identify those involved in the incident. “If these people’s guilt is proven, then there’s a high likelihood they won’t be allowed to attend World Cup and Russian league games,” he said, according to the AP.

Ahead of the 2018 Winter Olympics in PyeongChang, South Korea, the International Olympic Committee suspended Russia from competing due to a systematic, widespread doping scheme. Individual athletes from the country were allowed to compete under a nameless flag “under strict conditions.” Still, a Russian curler who initially earned bronze in the 2018 mixed doubles event tested positive for performance-enhancing drugs and was striped of his medal.

Viewers can catch all 64 matches of the 2018 World Cup live on FOX Sports. Thirty-eight of those matches will air live, including the opening match between Russia and Saudi Arabia on July 14 at 11:00 a.m. E.T., as well as the championship match on July 15 at 11:00 a.m. E.T.

Viewers with cable can also watch the games on the Fox Sports GO app on their iOS or Android phones, or on their Apple TV, FireTV, Roku, Chromecast and Xbox.

Telemundo Deportes, the Spanish-language sports network, will also air games from the World Cup on its network and Universo, as well as online.

What is this whole ‘cat’ thing?

A white, deaf, German cat named Achilles may predict the correct winner of the 2018 World Cup. (You read that right.)

Russian officials announced that Achilles, who lives at the State Hermitage Museum in Saint Petersburg, is slated to predict the highly anticipated event’s outcome.

Indeed, Achilles — dubbed the “feline oracle” by the museum — predicted several matches correctly during the 2017 FIFA Confederations Cup in Saint Petersburg. For those matches, the cat chose correctly between two bowls of food marked with the flags of the competing countries.

Yes, tickets to the 2018 World Cup are still available. The last-minute phase of FIFA’s ticket selling began in mid-April, meaning that tickets are available on a first-come, first-serve basis.

“We would advise football fans to place their order online and as soon as the sales period opens, as high demand can be expected and the most sought-after Tickets are likely to sell out very quickly,” FIFA said on its website.

More than 1.69 million tickets have already been purchased since September 2017.

The German men’s national team won the 2014 FIFA World Cup in Brazil in a thrilling 1-0 victory against Argentina. Mario Gotze scored the game-winning goal against Argentina in overtime. (It’s unclear if Gotze will make Germany’s team for the World Cup this year, according to ESPN.)

The German win also meant defeat for Lionel Messi, who is widely known as one of the best soccer players in the world. Despite winning the tournament’s best player award in 2014, Messi grieved over Argentina’s loss. “Right now, nothing can console me — not the award of anything else,” he said after the game, according to FIFA. “Our only goal was to take home the World Cup and enjoy our victory with everyone in Argentina.”

In 2018, Messi is hoping for a chance at revenge. “We feel that it’s now or never,” he said recently, according to Sports Illustrated. He acknowledged, however, that Argentina was not a favorite to win this year. “There are much better teams like Spain, Germany, Brazil and France,” he said.

The 2022 World Cup will be held in Qatar, marking the first time the international event will be held in the Middle East. Organizers have already begun construction on stadiums to prepare for the event.

Meanwhile, FIFA is considering raising the number of teams that can compete in the World Cup to 48 by the event in 2022. That would add 16 teams to those competing, 16 more games and four extra days to the month-long event. The head of the European Leagues has voiced opposition to the plan, since it would extend the event and make the mid-season break even longer, according to NBC Sports.

The U.S., Canada and Mexico won a joint bid to host the 2026 World Cup after FIFA’s elected board members voted in June for the North America option over Morocco’s bid, which was viewed as a riskier option. In the North America bid, the U.S. proposed hosted 60 of the 80 games, which would leave Mexico and Canada each 10 games to host.

Correction: The original version of this story misstated the teams to watch during the 2018 World Cup. Italy did not qualify for this year’s World Cup and is therefore not a team to watch. 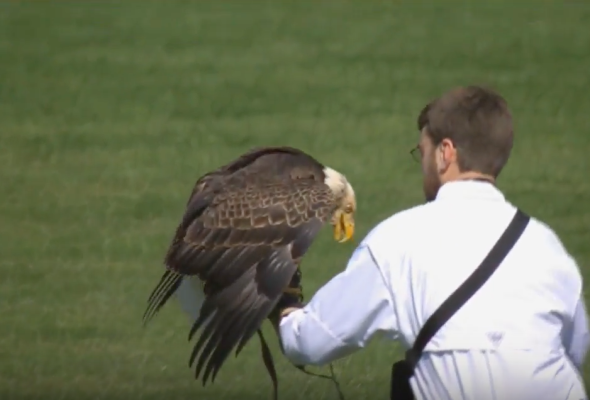 This Bald Eagle Went Rogue and Swooped Onto a Mariners Pitcher Before a Baseball Game
Next Up: Editor's Pick