James Comey Compared President Trump to a Mafia Boss. Stephen Colbert Took It From There.

Former FBI Director James Comey is stopping by The Late Show on Tuesday, April 17 to discuss his book, “A Higher Loyalty”, and Stephen Colbert is doing his due diligence to prepare.

“Let me tell you how seriously I’m taking tomorrow night’s interview with James Comey,” Colbert said on Monday’s episode of The Late Show: “I read his book. Last night. I also hunkered down to watch his warmup interview with George Stephanopoulos.” Colbert was particularly struck by Comey’s descriptions of President Trump’s appearance. “For his next job, he should go from Justice Department to judge on RuPaul’s Drag Race,” suggested Colbert.

While Colbert loved Comey’s color commentary, he wasn’t as sold on his description of Trump as a mafia boss. Colbert just thinks that Trump “doesn’t seem tough enough to be a mob boss”. That said, Colbert couldn’t help but build on the idea. “Like la Cosa Nostra, Trump has appointed family members to key positions,” Colbert noted. “But unlike the mafia, none of his relatives are competent. It’s all explained in the new movie, Godfather Part 4: Oops! All Fredos.” 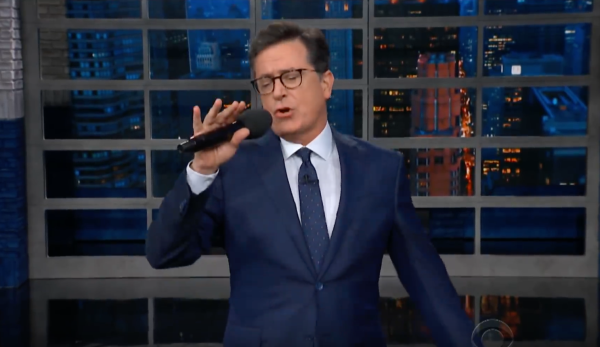