James Comey slammed President Donald Trump for saying on Twitter that he should be jailed for his actions as FBI Director, arguing that the American people are becoming dangerously numb to the President undermining the key tenets of the United States.

“That is not normal that is not OK. First of all, he’s just making stuff up. Most importantly, the President of the United States is calling for the imprisonment of a private citizen as he’s done for a whole lot of people who criticize him. That is not acceptable in this country,” Comey, whom Trump fired in May 2017, told ABC News’ George Stephanopoulos Tuesday on Good Morning America. “I hope people read the book and see why the rule of law is such an important value in this country. And key to that is that the President doesn’t get to decide who goes to jail.”

Comey made his second appearance on ABC on the day his highly-anticipated book, A Higher Loyalty, is being released. The book chronicles Comey’s tenure FBI Director during the 2016 elections and the first months of the Trump administration. Trump fired Comey last May, initially citing recommendations from the two top officials in the Department of Justice, who argued he should be terminated based on his handling of the probe into Hillary Clinton’s private e-mail server. But later that week, Trump conceded in an interview with NBC News’ Lester Holt that he had always intended to fire Comey and was frustrated with the investigation into Russian meddling in the 2016 election. A little over a week after Comey was fired, Rosenstein appointed Robert Mueller as Special Counsel in the Russia investigation.

On Sunday morning, just hours before Comey’s first interview with Stephanopoulos to discuss the book, Trump had tweeted the calls implying Comey should be jailed, arguing that he leaked classified information and lied to Congress, claims Comey said Trump was fabricating. “The big questions in Comey’s badly reviewed book aren’t answered like, how come he gave up Classified Information (jail), why did he lie to Congress (jail), why did the DNC refuse to give Server to the FBI (why didn’t they TAKE it), why the phony memos, McCabe’s $700,000 & more?” Trump tweeted.

Comey also voiced concern that Americans are becoming numb to these types of Trump’s tweets which he said was a hazardous road to travel. “We wake up in the morning and see the President of the United States is accusing people of crimes without evidence,” he said. “That should wake us all up with a start, but there’s been so much of it that we’re a little bit numb, and that’s dangerous.” 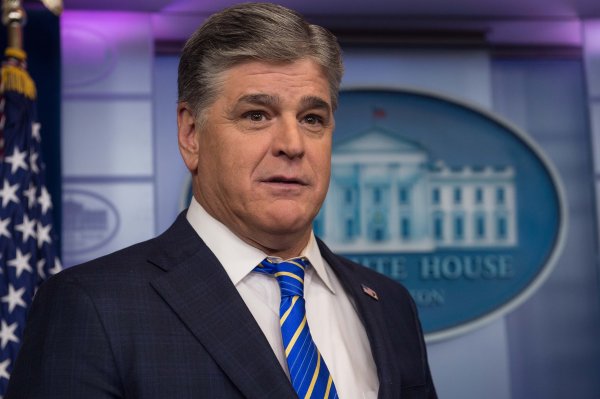 Here's How Fox Handled the News That Sean Hannity Was Trump Lawyer's 'Third Client'
Next Up: Editor's Pick