Donald Trump won’t be the only embattled leader at this week’s U.S.-.Japan summit. It’s been a rough spring for Japanese Prime Minister Shinzo Abe—he needs this summit to go well, maybe even more than Trump. Here’s why:

1. Abe is facing trouble at home

Just six months ago Abe and his Liberal Democratic Party (LDP) were riding high, having secured a 2/3 supermajority in snap elections for the lower house of the Diet, Japan’s national parliament. It was a decisive victory, boosting Abe’s confidence in his ability to push ahead in his quest to rewrite Japan’s “pacifist” constitution. In the run-up to those elections, Abe’s popularity was above 50 percent, and pundits were bullish on the prospect of him winning a third term as president of the Liberal Democratic Party (LDP) and becoming Japan’s longest-serving prime minister in the post-war era (he’s currently third).

Today, his popularity has plummeted to below 30 percent according to one recent poll (lower than Trump’s current 39 percent). Much of that has to do with the Moritomo scandal, which involves allegations that a rightwing activist close to Abe and his wife secured a suspiciously good land deal from the government to establish an elementary school. While the scandal has been plastered across Japanese headlines since early 2017 — and the Abes deny any wrongdoing — recent reports that Japan’s Finance Ministry doctored documents related to the deal to remove references to Abe, his wife Akie, and other political figures have breathed new life into accusations of impropriety and sparked a broader effort to dig up more examples of government misdoings. Almost half (48 percent) of Japanese voters believe Abe should resign over the scandal; just this weekend, thousands took to the streets in Tokyo to demand his ouster. There are countries where protests like this happen once a week; Japan isn’t one of them.

2. Abe wants a seat at the table for North Korea talks

All these issues are coming to a head as Abe is preparing to run for reelection in the LDP’s presidential contest this September and serve another 3-year term. But it’s not just domestic politics that Abe needs to be worried about. Abe was caught completely off guard by Trump’s impromptu decision to accept North Korean Leader Kim Jong-Un’s invitation to a summit later this spring. Along with South Korea’s previous administration, Abe had held a tough-line on sanctioning and isolating the Kim regime. Now South Korea is headed by Moon Jae-In, a progressive politician who advocates peaceful engagement with North Korea, and the U.S. is being led by the mercurial Trump. Japan is understandably concerned about being marginalized from, or even left out of, negotiations—it wants to make sure that if, for example, North Korea agrees to destroy the ICBMs that can hit the U.S. mainland, it will also destroy the short and medium-range ballistic missiles that can hit Japan, too.

A nuclear North Korea remains a non-starter for Japan, as it is for the U.S.—expect Abe to reaffirm his firm support for the U.S. “maximum pressure” strategy during discussions with Trump this week, and for Trump to agree wholeheartedly that keeping tough sanctions in place is critical to efforts to persuade Kim to abandon his nuclear ambitions.

North Korea is actually expected to be the easy part of the Trump-Abe summit. Much more contentious will be the trade talk—it hasn’t escaped Abe’s notice (nor that of his detractors in Japan) that his supposedly warm relationship with Trump failed to secure his country’s exemption from Trump’s Section 232 steel and aluminum tariffs, which the US will likely impose next month. Japan is responsible for nearly 5 percent of all steel imported into the U.S., or roughly 1.9 million tons.

It’s no secret that Trump prefers bilateral trade deals to multilateral ones; Trump argues that the U.S. can exert more leverage on governments by confronting them one-on-one. So we can expect Trump to lean on Abe to begin negotiations for a bilateral free trade agreement (FTA), likely by tying them to the lifting of steel and aluminum sanctions. Abe will try to avoid promising anything specific on that front, knowing that Trump will seek to extract more concessions from Japan than it already agreed to give in the Trans-Pacific Partnership (TPP) trade agreement.

But Abe is not in a position to refuse Trump outright given Japan’s need to keep the economic and security relationship on an even keel. Abe will likely try to give Trump just enough to allow the U.S. president to declare that Japan has committed to a better deal for the U.S., but not so much that Abe looks like has caved into Trump’s demands. That rather tortured compromise will probably come in the form of pledges to work harder to reduce the U.S. trade deficit and to allow U.S. firms more unfettered access to the Japanese market.

4. The possibility of the U.S. joining the Pacific region’s big trade pact

Instead of agreeing to near-term bilateral FTA talks, Abe will try to steer Trump back towards TPP, which was intended both to promote international commerce and to hem in China’s economic, political, and security ambitions in Asia. Abe spent enormous political capital selling the Japanese public on the need for the 12-country trade deal when it was still being negotiated under Obama, but Trump withdrew the U.S. from TPP talks just three days into his presidency, fulfilling a key campaign promise. The rest of the signatories forged ahead and signed a revised agreement last month now colloquially referred to as TPP-11; this new trade deal dropped the U.S.-backed provisions on intellectual property and investor-state dispute settlements, among others.

Getting the U.S. under Trump to join TPP was always going to be a longshot. But those prospects received an unexpected boost late last week when Trump tweeted that he was open to looking again at TPP now that a possible trade war with China looms—albeit with the caveat that only “if the deal were substantially better than the deal offered to Pres. Obama.” Given that the Obama team engaged in arduous negotiations for years to extract U.S.-friendly concessions, it seems unlikely the signatories would capitulate just because Trump tweeted his openness to joining; indeed, many of the TPP-11 countries were notably cool to the prospect, especially if that would require reopening and renegotiating the original TPP text.

Japan, however, is more open to the idea of helping create a pathway for the U.S. to join TPP — and even if it never comes to pass, Abe will express to Trump his government’s willingness to support him on this front.

5. The delicate art of golf diplomacy

The reality is that there are some unprecedentedly complex issues on the summit agenda this week, and the political troubles that both Abe and Trump are facing at home will make significant concessions tough for either to offer. But Abe arrives this week knowing that he must try his best to give Trump enough for him to declare (tweet?) the summit a success; it remains to be seen what Trump is willing to give Abe in return. But make no mistake: now that Beijing is in Trump’s crosshairs (and vice versa), the Abe-Trump relationship is more important than ever. How important? Reports last week that Trump’s advance team hadn’t extended a formal invitation to Abe for a round of golf threw Tokyo into a tizzy. Thankfully, golf this week has been confirmed. And if Abe can charmingly ingratiate himself to Trump as he did during their last outing on the links, so much the better for Japan—and the U.S., too. 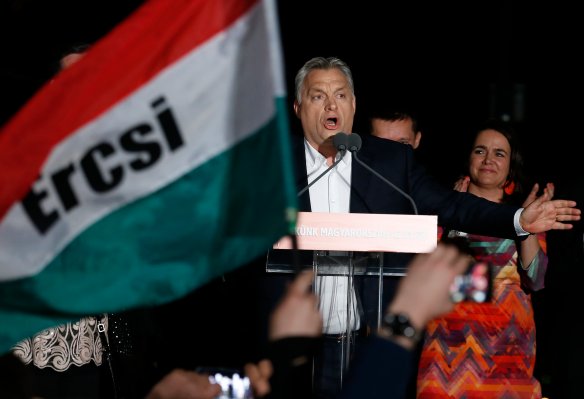 Hungary's Far Right Leader Is Going Nowhere—and Europe Should Be Worried
Next Up: Editor's Pick