The drought is over for American women at the Boston Marathon. Desiree “Desi” Linden, 34, won the 2018 Boston Marathon and became the first American woman to win the women’s race since Lisa Larsen Weidenback did so in 1985 after pulling away from a competitive field and battling unusually cold, wet and windy conditions.

The win marked redemption for Linden, who performed in the elite field at Boston throughout her career and lost the 2011 Boston Marathon title by just two seconds. Linden, a two-time Olympian, came out on top Monday when she pulled away from the chase pack and took the lead from Ethiopian runner Mamitu Daska toward the end of the race. For the final five miles of the race, Linden expanded her lead and crossed the finish line, drenched from the rain and with no other runners in sight. Linden won the women’s race with an unofficial time 2:39.54 — more than 10 minutes off her personal record but a substantial effort amid Boston’s harsh weather conditions on Monday.

“It’s storybook,” Linden told NBC Sports of her win. “I’m thrilled to be here and get it done.”

“Even on a day like today where it’s pretty miserable out,” she added, “people show up and they embrace the race.”

Linden’s victory answered months of speculation as to whether a U.S. woman could win due to a talented American field in this year’s race. Professional distance runners Shalane Flanagan, Molly Huddle and Sara Sellers, among several others, joined Linden in the women’s race, and Americans filled six of the top eight finishers. Flanagan, one of the favorites among the Americans, came in seventh with an unofficial time of 2:46.31. In November 2017, Flanagan won the TCS New York City Marathon — similarly becoming the first American woman to do so since 1977.

Sportsmanship among the Americans was on full display during the race, particularly when Linden held back toward the beginning of the race to help Flanagan catch up to the pack after stopping at a port-a-potty. In an interview after the race, Linden said she wasn’t feeling well, considered dropping out mid-race and chose to instead try to help Flanagan, a Massachusetts native who was vying for a Boston title.

“When you work together, you never know what’s going to happen,” Linden told NBC Sports. “Helping her helped me.”

Flanagan and Linden have represented the U.S. together throughout their careers, including at the Olympic marathon in 2012 and 2016.

Linden and 1985’s winner Weidenback, now Lisa Larsen Rainsberger, have another connection aside from their shared titles: Michigan. According to the Detroit Free Press, two runners both live in the midwestern state, and Liden lives in Washington, Mich., just on the outside of metro Detroit. Perhaps Linden’s experience with inclement weather in Michigan helped give her a leg up with the rain, wind and cold in Boston Monday.

History was also made this year on the men’s side when Yuki Kawauchi became the first Japanese man to win the race since Toshihiko Seko won in 1987.

Correction: The original version of this story misstated the amount of time by which Desiree Linden lost the 2011 Boston Marathon. She lost by two seconds, not six seconds. 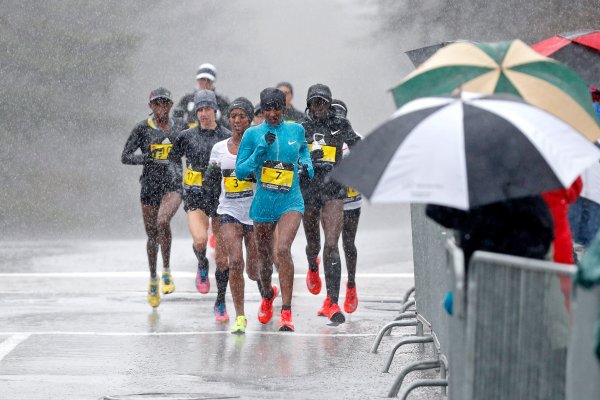