As if Heartbreak Hill wasn’t hard enough. Tens of thousands of runners racing the Boston Marathon 2018 faced grueling conditions on Monday as heavy rain poured and wind gusts hit more than 25 miles per hour — all among the coldest temperatures for the 122nd annual Boston Marathon race in three decades.

Elite athletes wore rain jackets and dodged puddles on the sleek pavement and thousands of racers packed in corrals before the start wore trash bags over their outfits. Experts and analysts anticipated the harsh Boston Marathon conditions would result in slower finish times for elites and amateurs, alike.

Perhaps the pinnacle of marathon racing, the Boston Marathon is a long-sought goal for distance runners and a storied tradition in the city, where spectators line the streets on Patriots Day to cheer on and support racers. This year, those supporters wore rain gear, carried umbrellas and wrapped trash bags around their shoes. And, despite the conditions, Boston Marathon 2018 runners posted on social media to share their excitement for the race.

Spectators and volunteers showed up despite the wet conditions. Indeed, Shalane Flanagan, a U.S. professional runner who won the TCS New York City Marathon in November 2017, posted a thank-you note to volunteers ahead of the race Monday morning.

The race Monday also marked five years since the Boston Marathon bombing, which killed three people and injured more than 260 others. In each year after the horrific event, Boston has united around the annual marathon with mantras like “Boston Strong.” The year after the bombing, Meb Keflezighi, an iconic long distance runner, became the first American to win the race since the 1980s. This year, Keflezighi returned to the course to raise funds for the Martin Richards Foundation, which formed to honor the 8-year-old boy who died in the bombings in 2013. 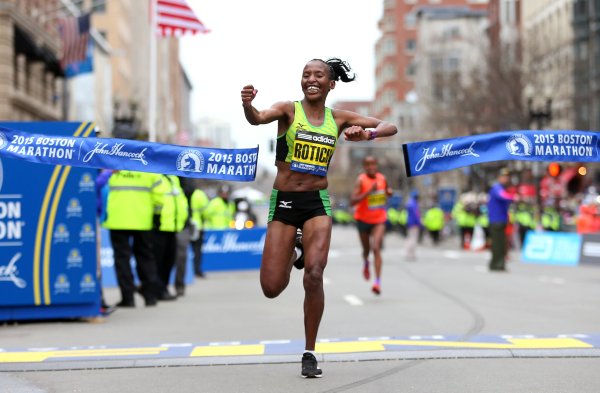 How to Stream the Boston Marathon Live Online
Next Up: Editor's Pick