Beyoncé asked “Can you keep up?” when she reunited with Destiny’s Child and sang their hit “Lose My Breath” at Coachella. And the answer to that question was a clear “no” from her stunning look.

The 36-year-old singer rocked five custom Balmain looks for her highly anticipated headlining performance at the California music festival on Saturday night, including a camo body suit with thigh-high boots. However, fans watching the concert from home noticed that Beyoncé seemed to be having a bit a trouble with her outfit. While joined onstage by Kelly Rowland and Michelle Williams, she was spotted doing some choreography with one hand over her strap to prevent any unwanted exposure.

While sporting the same look during a dance off with her sister Solange, the pop star again tugged on her strap as her over-the-knee boots became loose and dropped to her ankles.

Unsurprisingly, Twitter had a few thoughts on the matter.

Others praised Beyoncé for being a total pro by not missing a beat while simultaneously ensuring there was no Janet Jackson moment.

“I will never be over Beyoncé doing the entire Get Me Bodied extended dance break while simultaneously fighting off a wardrobe malfunction,” wrote one fan.

Designer Olivier Rousteing made all five looks in collaboration with the singer, stylist Marni Senofonte and the rest of Bey’s team. Her outfits included everything from opulent bejeweled leotards and embellished capes, to a classic yellow hoodie and distressed Levi’s jean shorts.

Explaining the inspiration behind the outfits, Rousteing told Vogue that Beyoncé was “looking for something in a military style” because “the shows were all about survivors.”

While all of the outfits obviously got Queen Bey’s seal of approval, there was one look in particular that caught husband JAY-Z’s attention.

“Jay saw the Egyptian goddess cape and when B put it on, his eyes went wide and he was so excited, he said, ‘Oh, wow!’ That gave me a lot of satisfaction,” the designer told the outlet.

And she’s not done yet. Rousteing also told Vogue that he has made a completely separate collection of looks for the singer to wear next week during her second Coachella performance. 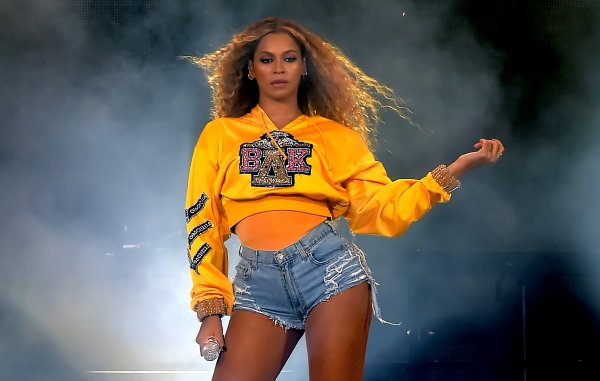 Beyoncé's Historic Coachella Performance Has Fans Singing the Praises of 'Beychella'
Next Up: Editor's Pick