Kentucky Gov. Matt Bevin lashed out at teachers protesting to raise state education funding by saying the statewide walkout led students to be sexually assaulted and use drugs.

“I guarantee you somewhere in Kentucky today, a child was sexually assaulted that was left at home because there was nobody there to watch them,” Bevin told reporters Friday. “I guarantee you somewhere today, a child was physically harmed or ingested poison because they were left alone because a single parent didn’t have any money to take care of them.”

Bevin did not provide any proof of increased sexual assault or drug use among teens or explain how the teachers could be responsible, the Washington Post noted.

“Children were harmed — some physically, some sexually, some were introduced to drugs for the first time — because they were vulnerable and left alone,” Bevin continued.

Teachers’ association members mentioned that parents were notified ahead of time and that many parents supported their work to get more resources for students.

“The bottom line is that’s one day,” Jefferson County Teachers Association President Brent McKim told the Courier Journal. “He was cutting hundreds of millions of dollars from kids that would impact every day, and that’s what we were in Frankfort to stop. We were there with the overwhelming support and encouragement of our parents who know that we care about every student in our classes.”

Bevin vetoed a two-year spending bill that would provide a nearly half-billion-dollar tax increase, which was later overridden by fellow Republicans in the legislature. 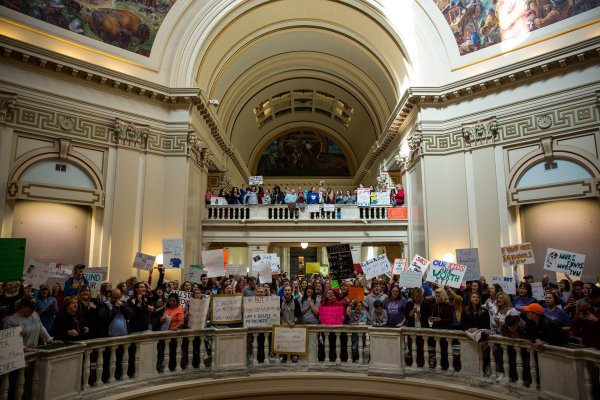 The Oklahoma Teacher Strike Has Ended – Here's What They Got. And What They Didn't
Next Up: Editor's Pick