The U.S., Britain and France Just Unleashed 105 Missiles on Syria. Now What?

The barrage of 105 missiles that rained down on western Syria early Saturday morning intended to deter Syrian President Bashar Assad from launching chemical weapons attacks on his own people, but the military operation raises fresh questions about what happens next.

President Donald Trump’s decision stands to further complicate Syria’s already complex civil war, now in its eighth year. The Americans, Russians, Iranians, Turks, Israelis and more have all been involved in Syria’s bloodshed to varying degrees, turning it into a proxy battleground for various global interests.

The strikes, launched from U.S. bomber jets, warships, and an attack submarine along with French and British fighter jets, ratcheted up tensions in the multi-sided conflict. Syria, with allies Russia and Iran, condemned the attack and hinted at possible reprisal.

The Trump Administration, meanwhile, indicated that the predawn assault was a one-off operation to be repeated only if Assad used chemical weapons again. It wasn’t clear if that now included chlorine, which Assad has used dozens of times against civilians without American retaliation.

Nikki Haley, U.S. ambassador to the United Nations, told the U.N. Security Council “if the Assad regime uses chemical weapons again, the U.S. is locked and loaded.” Such a proclamation risks bringing more American involvement into Syria, which has been engulfed in fighting since 2011 when civil unrest tied to the Arab Spring movement escalated into a full-blown rebellion against Assad. There are about 2,000 U.S. troops currently inside the country, where they’re focused on fighting the last remnants of ISIS.

Speaking Friday night from the White House in a nationally televised address, Trump announced he ordered “precision strikes” with U.S. allies as retaliation for the apparent April 7 chemical attack on the western Syrian town of Douma, in which dozens of civilians were killed. Chlorine is believed to have been used, but nerve agent has not yet been confirmed. “The purpose of our actions tonight is to establish a strong deterrent against the production, spread, and use of chemical weapons,” Trump said. “Establishing this deterrent is a vital national security interest of the United States.”

The U.S. military said the main targets of the strikes were two storage facilities, one that produced the deadly nerve agent sarin, and another was part of a command post, which were located west of the city of Homs. The third target was the Barzah Research Center, a military facility located near Damascus that conducted research, development, production and testing of chemical and biological warfare technology.

Lt. Gen. Kenneth McKenzie, director of the military’s Joint Chiefs of Staff, told reporters at the Pentagon the aim of Syrian operation was to take out the “heart” of the chemical weapons program, but he acknowledged the strikes “certainly” did not eliminate it.

“Obviously, the Syrian chemical weapons system is larger than the three we addressed,” he said. “However these are the best targets that presented the best opportunity to minimize collateral damage, to avoid killing innocent civilians, and to send a very strong message. We could have gone other places and done other things. But we, in close coordination with our allies, decided that these were the best that fit that criteria.”

Indeed, the facilities were most likely empty at 4 a.m. local time when the strike hit, McKenzie said. No civilian deaths were reported as a direct result of the strikes, he said, but there was a possibility that innocents could have been killed by Syrian air defense systems, which shot wildly and missed inbound U.S. missiles. He dismissed claims by the Syrian government that the defenses shot down more than 70 weapons, adding that every missile hit its pre-designed target.

When the strikes were over and the sun rose over Damascus, Assad appeared unfazed by the Western show of force. Syria’s foreign ministry issued a statement saying the military strikes “will not affect the determination and will of the Syrian people and their armed forces to continue pursuing the remnants of … terrorism and defending Syria’s sovereignty.”

Russian President Vladimir Putin and Iranian Supreme Leader Ayatollah Ali Khamenei, Assad’s most prominent allies, issued statements declaring the strikes were a violation of international law. Both nations have troops and equipment in Syria that has, at times, threatened the relatively small U.S. presence in Syria. U.S. commanders put their forces on higher alert for possible retaliation after the strikes.

Backed by Iranian military aid and Russian airpower, Syrian President Bashar Assad has nearly defeated the Islamist-dominated rebel groups spawned in the chaos of Syria’s 2011 revolution. The insurgents still hold scraps of territory, but they have no hope of challenging Assad’s hold on power. He’s repeatedly launched chemical weapons against populated cities and towns to defeat his adversaries even though they have been internationally banned after widespread use in World War I.

“The joint US-UK-France strike against Syrian chemical weapons targets sent a strong signal that Assad’s crimes against humanity will not go unpunished,” said Andrew Weber, former assistant Secretary of Defense for nuclear, chemical and biological defense. “It will restore deterrence against further regime use of chemical weapons, at least temporarily. The U.S. and its allies should be prepared to conduct larger follow on attacks as needed.”

The operation marked the second time the U.S. struck Assad’s military. Trump ordered an attack last April against the Shayrat air base after a warplane at the base dropped bombs on another town allegedly containing the nerve agent sarin. U.S. warships launched 59 Tomahawk cruise missiles at the base.

This time, Trump declared “Mission Accomplished!” in a tweet, recalling the phrase made infamous by President George W. Bush after a premature celebration of the 2003 U.S.-led invasion of Iraq.

But Assad was not deterred a year ago from continuing to use chemical weapons that were supposed to have been removed from Syria in a 2013 deal brokered by President Obama to prevent further attacks. Russia was the framework guarantor of removing all the chemical weapons, but apparently has not lived up to the deal.

Now, the use of chemical weapons is a “red line” that, if crossed, will trigger U.S. and European military response, but the same tough talk has not been attributed to other war crimes. Assad has unleashed brutal, unrelenting violence, leveling his country’s cities with crude bombs dropped from helicopters as well as deliberately striking hospitals and humanitarian convoys.

Those killed by chemical weapons attacks represent a fraction of the approximate 350,000 people who have been killed in the fighting, according to the Syrian Observatory for Human Rights. Dana White, Pentagon spokeswoman, said the latest round of strikes could reenergize the U.N.-led peace process to end the Syrian civil war in Geneva, Switzerland. But those talks have repeatedly failed, causing analysts to cast doubt on the optimism.

“The strikes against Assad’s chemical weapons facilities were necessary to reaffirm the will of the U.S. and allied nations to deter chemical weapons use but are nowhere near sufficient,” Jennifer Cafarella, a senior intelligence planner at the nonpartisan Institute for the Study of War. “Assad will regard them as an acceptable price for his victory in Damascus and will now continue his war effort without hesitation. The US will likely only meaningfully affect Assad’s calculus if we hold the survival of his regime at risk and/or constrain his backers, Russia and Iran.”

Daryl Kimball and Thomas Countryman of the Arms Control Association wrote that a better policy is needed to avoid further escalation. “Military force cannot be the only means of responding to these atrocities, and, so far, they have not been an effective means of deterring the further use of chemical weapons in Syria,” they wrote.

The next chapter of the Syrian civil war remains unwritten, but the Trump Administration’s position on whether to assert more American military might now relies on Assad.

“America does not seek an indefinite presence in Syria,” Trump said Friday, later adding: “We cannot purge the world of evil, or act everywhere there is tyranny.” 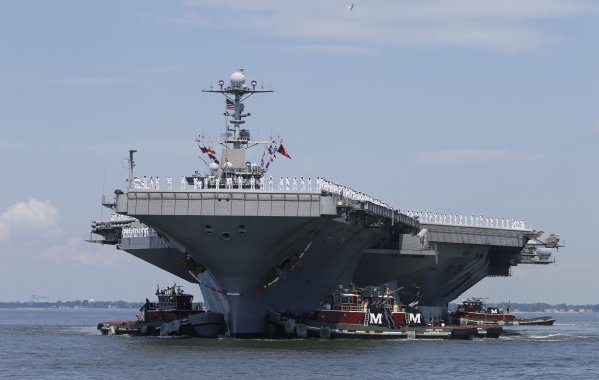 The Biggest U.S. Navy Force Since Iraq Invasion May Be Sailing Toward Syria
Next Up: Editor's Pick