The Biggest U.S. Navy Force Since Iraq Invasion May Be Sailing Toward Syria

The biggest U.S. Navy force since the 2003 invasion of Iraq may be headed toward Syria as President Donald Trump weighs a military response to the suspected chemical weapon attack in Douma, a town on the outskirts of Damascus.

The Times of London reports that the U.S. Navy is sending a total of ten warships and two submarines into the Mediterranean Sea. Any Navy task force will likely be led by the nuclear-powered aircraft carrier the U.S.S. Harry S. Truman, which set out from Norfolk, Virginia, this week with a strike group of five escort warships, according to the Times.

The guided missile destroyer the U.S.S. Donald Cook, which is capable of launching cruise missiles, is already in the area. There are believed to be three other destroyers and two submarines in the Mediterranean, as well, the Times reports. The French frigate Aquitaine has also been reported off the coast of Lebanon.

The Russian Navy has at least two Admiral Grigorovich-class frigates, which can launch cruise missiles, in the Mediterranean as well as submarines and support vessels, Reuters reports. There are also dozens of Russian warplanes stationed at the Hmeymim airbase in Syria. Russia also has an advanced S-400 anti-aircraft system, which is believed to be capable of shooting down both warplanes and cruise missiles.

The Syrian government has been bracing for a possible U.S. attack in retaliation to the suspected attack that left at least 40 people dead, according to activists and rescuers. On April 11, Trump warned on Twitter that Russia should “get ready” because missiles “will be coming, nice and new and ‘smart!’” over Syria.

Trump later tweeted that an attack on Syrian President Bashar al-Assad “could be very soon or not so soon at all!” before adding that his administration had “done a great job of ridding the region of ISIS.”

Britain’s Prime Minister Theresa May received backing to join the U.S. military action following a cabinet meeting in which ministers agreed “it was vital that the use of chemical weapons did not go unchallenged,” the Times reports. Trump and May spoke on the phone Thursday evening to discuss how they would respond to the suspected attack.

Syrian officials, and their Russian allies, have repeatedly denied being behind the suspect chemical attack – even going so far as to claim it was orchestrated by the U.K. Moscow has threatened to retaliate for any strikes on Syrian government targets. 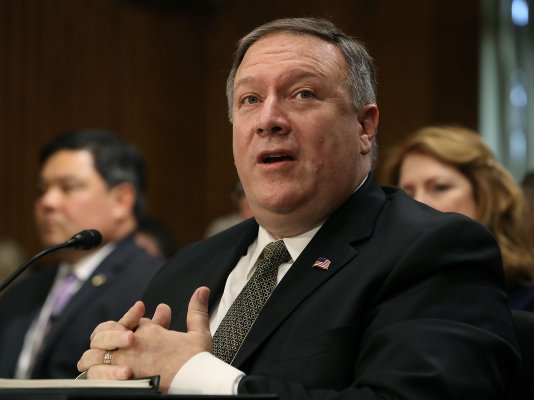