A Yarmouth police officer who was shot in the head while serving a warrant in the town of Barnstable, Mass. has died from his injuries at Cape Cod Hospital.

The officer, Sean Gannon, was shot around 3:30 p.m. in the Marston Mills neighborhood of the Massachusetts town, according to The Cape Cod Times.

Gannon was attempting to serve the suspect a warrant when he was shot, and was apparently searching the home’s attic to find the suspect when it happened, according to News 7 Boston.

The suspect, who has a criminal history, is now in custody, but a shootout with police ensued around 5:45 p.m. after the suspect fatally shot Gannon, CBS 5 reported.

The search warrant that was being executed was a “multi-agency warrant search,”CBS 5 said. The Cape Cod Times reported that in addition to a SWAT team showing up, ATF agents also arrived on the scene. A police perimeter was set up around the home, and the suspect was barricaded in his home before being successfully captured after a standoff, CBS 5 reported.

The neighborhood was evacuated and police were handing out bullet proof vests in case of additional gun fire, the Cape Cod Times reported.

Gannon’s K9 unit police dog was also shot and seriously wounded. The animal’s current condition is not known, according to the Boston Globe. 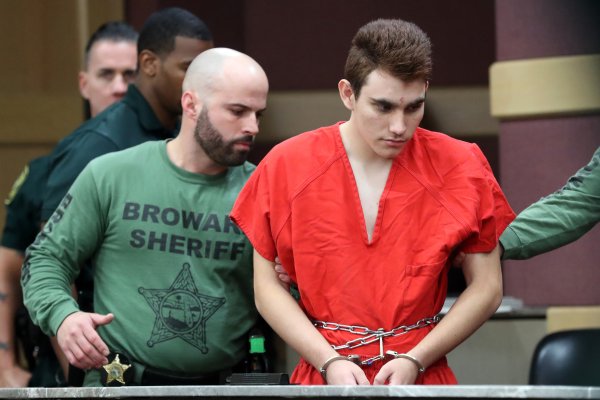 The Accused Parkland Shooter Has an $800,000 Trust Fund. But He Says He Can’t Afford an Attorney
Next Up: Editor's Pick