The escalating tensions weighed on investors already concerned about war, with crude prices holding high levels while the lira in Turkey, which has troops in Syria, weakened for the fourth day.

Pentagon chief Jim Mattis and other members of Trump’s national security team met Wednesday, after the president warned Russia on Twitter to expect a missile barrage toward its ally, Syria, saying “You shouldn’t be partners with a Gas Killing Animal who kills his people and enjoys it!”

Despite the rhetoric, the U.S. administration hasn’t decided how to retaliate against Assad, White House spokeswoman Sarah Huckabee Sanders told reporters Wednesday, adding that the president has been in talks with a number of key allies in recent days.

“We’re maintaining that we have a number of options and all of those options are still on the table,” Sanders said when asked about the possibility of military action. “Final decisions haven’t been made yet on that front.”

The White House said that Trump would coordinate his response with French President Emmanuel Macron, while U.K. Prime Minister Theresa May called an emergency Cabinet meeting for Thursday to discuss the British response to the apparent chemical weapons attack in Douma, a town controlled by Syrian rebels. May said she had little doubt — despite Syrian and Russian protests to the contrary — that Assad’s government was to blame for what happened in Douma.

“All the indications are that the Syrian regime was responsible,” she told reporters on Wednesday. “We will be working with our closest allies on how we can ensure that those who are responsible are held to account. The continued use of chemical weapons cannot go unchallenged.”

Amid the threat of conflict, oil prices hovered near the highest level since 2014. Turkey’s currency weakened, while the Borsa Istanbul 100 Index for stocks was little changed at open in Istanbul after it fell below its 200-day moving average. Oil producer and insurance shares led gainers on the Stoxx Europe 600 Index.

This is the second time in a year that Washington is gearing to respond militarily in Syria. This time, Trump is under pressure to hit harder and take bigger risks than the attack in April 2017, which was limited to a single Syrian base and left little lasting damage.

Assad’s media and political adviser reiterated the government’s rejection of accusations the country used chemical weapons, telling Al-Mayadeen TV in an interview in Damascus late Wednesday that Syria and its allies — Russia, Iran and Hezbollah — will prevail in any upcoming conflict. “They will not win in anything they do,” Bouthaina Shaaban said. “We will be the winners.”

The prospect of direct participation by France — and possibly other allies such as the U.K. and Saudi Arabia — would provide greater legitimacy for a large operation that otherwise would risk criticism as violating international law, said Andrew Bell, an assistant professor at Indiana University who focuses on international security and the law of armed conflict. A broader coalition helps build the case for a humanitarian mandate, he said.

Trump made his views clear on Wednesday, saying on Twitter that relations with Russia have never been worse and warning Moscow about an incoming fusillade. “Russia vows to shoot down any and all missiles fired at Syria. Get ready Russia, because they will be coming, nice and new and ‘smart!,’” Trump wrote.

Mattis, who was spotted alongside CIA Director Mike Pompeo at the White House on Wednesday, said he stands “ready to provide military options if appropriate.”

A strike that hits Russian assets in Syria — even if unintentionally — could result in a dangerous game of one-upmanship, potentially dragging the U.S. further into a conflict the president wants to leave. Russia has strengthened Syria’s air-defense capabilities, deploying S-400 missile batteries.

“There must be a consistent Syria policy, that is the key thing,” Norbert Roettgen, an ally of German Chancellor Angela Merkel and chairman of the foreign policy committee in the country’s parliament, said on Deutschlandfunk radio on Thursday. “There is no real U.S. policy on Syria. Assad and Russia have been given a free hand militarily.”

Amid the rising tensions, Syrian government forces were vacating airports and some key military positions in anticipation of an American-led strike, according to the Syrian Observatory for Human Rights, a U.K.-based organization. An unidentified Syrian Foreign Ministry official cited by state-run TV accused the Americans of sponsoring the lies of “terrorists” as a pretext to attack Syria.

Eurocontrol, a European air traffic agency, asked airlines to apply caution on flights to the eastern Mediterranean region because of possible air strikes in Syria. Kuwait Airways said late Wednesday it was suspending flights to Beirut starting April 12 and until further notice.

“The risk of military conflict between Russia and the U.S. in Syria is very high,” said Elena Suponina, a Mideast analyst at the Russian Institute of Strategic Studies, which counsels the Kremlin. “If Trump takes this step and Russian citizens are harmed, the reaction will be very harsh.” 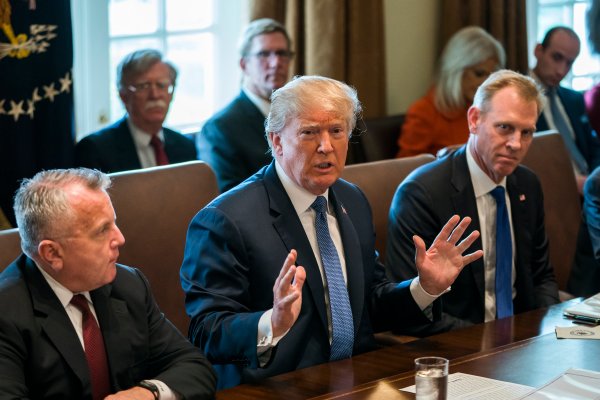