Ideas
By Justin Bronk
Justin Bronk is a Research Fellow specializing in combat airpower and technology at The Royal United Services Institute (RUSI), an independent think tank on international defense and security.

President Donald Trump tweeted a warning Wednesday to Russia that his ‘nice and new and “smart!”’ missiles are going to hit Syria and its “Gas Killing Animal” ruler in retaliation for a chemical attack on the Damascus suburb of Douma.

However, Trump and his allies, British Prime Minister Theresa May and French President Emmanuel Macron, face a tough dilemma on how to react, since the situation in the Syrian civil war is considerably worse now than it was when the U.S. launched cruise missiles at the Shayrat airbase in April 2017. That retaliatory attack was ineffective and Syrian war planes were taking off from the base within hours of the strike.

Forces loyal to President Bashar Assad hold more of Syria and the opposition forces have lost several bitterly contested cities since then, while the Turkish offensive into Afrin has exposed the contradictions in the US alliance system. Most significantly, in the aftermath of the Shayrat strike, Russia publicly increased the level of integration between its air defenses in Syria and those of the regime.

The linking of the Russian air defense picture in Syria—informed by modern and highly capable radars such as those found on Russian naval ships and the feared S-400 system at Latakia—to the Syrian regime’s own Russian-supplied air defense system means that the missile batteries that would oppose any U.S.-led strike will have better situational awareness and targeting capabilities than in previous years.

It also means a greater and more open presence of Russian specialists embedded within the Syrian surface-to-air missile batteries, radar sites and command centers—all essential targets for suppression as part of any concerted U.S. air effort against the regime’s forces.

The battered and technologically inferior Syrian air force would not be capable of significant defensive efforts against a U.S.-led attack. However, the Russian air force has a respectable number of modern and highly lethal air superiority and multirole fighters which it could, in theory, use to threaten Western sorties.

What this means is that the US and its allies face a serious problem looking at options for punishing the Assad regime for this—the latest in a series of brutal chemical weapons attacks on rebel-held, civilian-populated areas.

While cruise missiles allow the U.S., and to a lesser extent France and the U.K., to attack regime targets in Syria without risking the safety of aircrew and without having to directly suppress the Syrian (and Russian) air defense network, there are serious limitations to what can be achieved beyond symbolic retaliation.

Again, as the strike on Shayrat showed, even upwards of 50 (extremely expensive) cruise missiles landing on a single airbase were not able to keep it out of operation for more than a few hours, and the demonstration of intent evidently failed in deterring further chemical attacks.

The strike largely depleted the magazines of three U.S. Navy warships in the Mediterranean and even the U.S. does not have endless supplies of such weapons available in theater at short notice.

The huge destruction wrought across Syria by the long civil war has not dented the Assad regime and its supporters’ determination to achieve a military victory using whatever means and whatever the cost.

It is, therefore, extremely unlikely that a limited strike or even a series of strikes will have much effect on the Assad regime’s willingness to continue the fight in much the same way as it has until now.

In terms of destroying the means for Assad to carry out chemical weapons attacks, chlorine gas is the main weapon used since the deal to remove most of the regime’s nerve agent stocks. It is a readily available industrial chemical. It is very difficult to imagine a series of targeted U.S. strikes being able to destroy all the possible sources of the industrial chorine cylinders which are incorporated into barrel bombs and rockets with such deadly effect.

The U.S. Air Force could use stealth aircraft such as the F-22 Raptor and B-2 Spirit with a reasonable probability of being able to evade the regime’s defenses and contain any Russian disruption effort. However, such assets are scarce and are unlikely to materially change the balance of power in Syria except as the leading edge of a larger air campaign which would require the total suppression of the defenses.

For France and the U.K., whose air forces lack operational stealth aircraft, any manned strike missions would be at serious risk from the Syrian defenses cued in by Russian radars even without the overt participation of Russian aircraft and SAM systems.

The Israeli Air Force, with unmatched experience of operating against the Syrian air defense system, lost an F-16 fighter recently—showing that the risk is real even for deep specialists in confronting this threat.

When all is said and done, the U.S., France and potentially the U.K. have the means to undertake another round of symbolic but ultimately ineffective strikes using standoff weapons against Assad’s airbases and potentially weapons storage areas. However, this is unlikely to affect the regime’s determination or ability to continue its military efforts to crush the opposition using urban sieges, massive bombardments and chemical weapons.

A larger effort to annihilate the Syrian air force or even the regime’s ability to continue the war effectively would require a large-scale air campaign which could be only conducted if it involved the suppression—by force—of the Syrian air defense network and possibly the Russian military’s air defenses. This would by necessity involve killing Russian troops and, for this reason, is an extremely dangerous and unlikely course of action.

This analysis first appeared on RUSI.org, the website of the Royal United Services Institute. Further analysis at: https://rusi.org/regions/middle-east-and-north-africa/syria 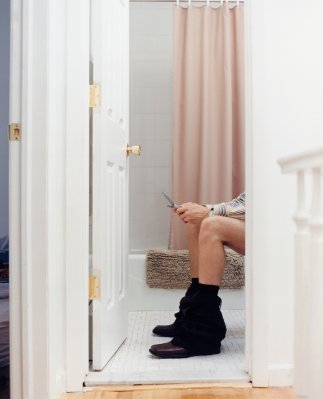 In Defense of Using Your Phone on the Toilet
Next Up: Editor's Pick