Westworld Is Finally Back. And Its Women Are Ready to Take Over

Thandie Newton likes to take the lead. When I meet her, co-star Evan Rachel Wood and Westworld co-creator Lisa Joy–three of the HBO show’s fierce women–in a Los Angeles hotel suite, I dither about whether we should sit on a sectional sofa or around a table. Newton directs us to the table. “This is serious,” she says. “A table creates a kind of boundary. Let’s not be on the couch about any of this.”

Westworld combines cowboys and robots with high-octane violence and a trippy take on artificial intelligence, but it’s also a show with a great deal on its mind. It’s among TV’s most fiercely feminist visions, a series that subverts traditionally masculine genres like the cowboy serial and the sci-fi mind bender by giving women, well, a seat at the table. The show takes the iconography of the American West–would-be Marlboro Men, on steeds with six-shooters in hand, ready to save the maiden or terrorize her–and flips it. By the end of Westworld‘s first season, the women have seized control.

The new season (premiering on April 22) takes the show’s long-simmering tensions and ignites them. Westworld, which began airing before the 2016 election kicked off the current reckoning with sexual assault and misogyny, returns to a world in which the experience of women pushed past their limit has become central to our national conversation. “We’re all becoming more awake to that idea right now–the search for truth,” says Wood.

And as the show takes its first steps into a new world, it’s a provocative statement suited for a moment that is just beginning to dawn. It’s a show on the precipice of going from hit to era-defining smash–all thanks to the women at the center of its spectacle.

Watching Westworld feels unlike watching anything else. Based on a 1973 movie directed by sci-fi maestro Michael Crichton, the show is set at an Old West–themed park and populated by robotic “hosts” who have been programmed to act out a cowpoke pantomime on loop. Guests are allowed to do whatever they want with these bodies: some choose to rescue and save them, while others have more sinister intentions. Scenes shift from the mostly idyllic life of the hosts–which are often interrupted by strange and chaotic outbursts of violence–to the futuristic world of their makers, who attempt to calibrate the robots and keep them in line.

As damsel in distress Dolores and jaded town madam Maeve, Wood and Newton play hosts whose minds are designed to be erased after each encounter. But suddenly, their minds begin holding on to memories of trauma. Their journeys get more attention than do those of the show’s men. Stars like Anthony Hopkins, Jeffrey Wright and Ed Harris simply don’t have as much to do. They’re obstacles, helpers or foils, while the heroines manifest their own destinies. By season’s end, Maeve embarks on a quest that promises to take her deeper into the show’s universe, while Dolores takes up arms to lead the rebellion, a blue-smocked Liberty leading the humanoids.

In just one season, Westworld has become one of the biggest shows on earth. “There are hundreds of people working every single day,” says Joy, who runs the show with her husband, The Dark Knight co-screenwriter Jonathan Nolan; J.J. Abrams is another executive producer. The show’s visual dazzle is twofold–in its careful reconstruction of the Gunsmoke America that lives in our shared imagination, and in its invention of a future where life is conjured by science that looks like magic. Westworld‘s grandeur has paid off. Its first season was HBO’s highest-rated debut ever, and it was nominated for Golden Globes and Emmys for Best Drama, along with nominations for Wood and Newton at both ceremonies.

Westworld brings together mass-appealing spectacle with critical approval–perhaps the first show to do that since network mate Game of Thrones. Like that show, Westworld gets much of its story’s momentum from nudity and from violence done against women, like when Harris’ character drags Dolores into a barn, seemingly to rape her. But such scenes do more than establish stakes; they create the necessary conditions to foment revolution. In her first meeting with Nolan and Joy, over Skype, Newton recalls, “they very eloquently described the vision for the show. They were going to subvert incredibly poignant and important themes about how women are represented, and would I mind being naked while I did it.” She said yes.

Joy knows it can be tough for actors to shoot those scenes–especially Wood, who testified before Congress in February about her own experience of sexual assault in efforts to secure an assault survivors’ bill of rights. “I do everything I can to make the set a safe place,” Joy says. “And if it doesn’t feel safe, you have to tell us, and your voice will be heard.”

Wood, who has acted since she was a child–her breakthrough was the youth-rebellion drama Thirteen–has found meaning in this role. “It comes from a very vulnerable, tortured place,” she says. And Newton, an industry veteran with credits including the Mission: Impossible franchise and Crash, had until Westworld been denied opportunities her white counterparts might expect. “I’ve had a really rough road in the 30 years I’ve been acting,” she says. Newton had been prepared to quit before that Skype call. “I came back into myself as an actress and woman and mother and activist,” she says. “Right when I’d given up, I arrived at Westworld.”

Like other projects that now seem more resonant thanks to the culture-wide awakening around assault–among them the TV show The Handmaid’s Tale and the film Three Billboards Outside Ebbing, Missouri—Westworld now feels urgently relevant. Each of those projects was under way before the 2016 election kicked off the current reckoning, and Westworld began airing just a month before ballots were cast. The show had already staked out the terrain of a social crisis that only later made headlines. “People say, ‘You’re so lucky this is so timely,’ and I’m like, ‘No, this is timeless,'” says Joy. “These are things we have struggled with since time immemorial.”

In conversation, Joy takes an empathetic backseat to her stars. As Newton tears up discussing her growing rapport with Wood, I sneak a look at Joy, who’s openly crying. Despite all the emotional brinkmanship and re-enactment of violent trauma that Wood and Newton are asked to do, both feel secure throughout. “It’s allowing people to see they don’t have to be egomaniacs,” Newton says. “They don’t have to be all about themselves. They can be vulnerable.”

“Women are conditioned to be separate, to be pitted against each other,” says Wood. “That’s conditioning. And that keeps us powerless.” On Westworld, the power of three creative women compounds itself, gaining emotional and narrative power not just as a response to bad news but also as an examination of what it means to live through trauma, to overcome it and to fight back. Its second season may be less the show to heal us than the show with the vivid imagination to show us what’s possible. It’s a vision of a future where women don’t play by their own rules. They make their own. 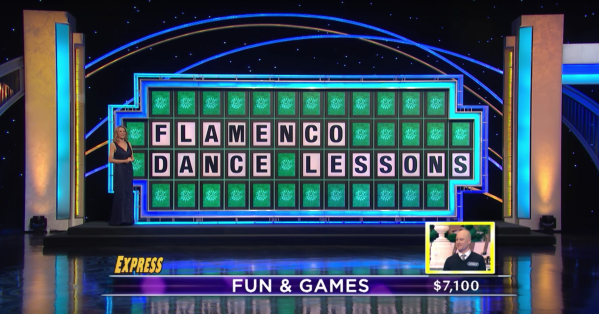 A Wheel of Fortune Contestant Mispronounced 'Flamenco' and It Cost Him the Entire Prize
Next Up: Editor's Pick