Now that so many men are being brought to account for past misbehavior, we’re all asking questions we never thought to ask before. One that comes up a lot is: What was he thinking? It’s early yet, but Chappaquiddick, director John Curran’s suspenseful, disturbing account of Senator Ted Kennedy’s involvement in the 1969 drowning death of 28-year-old campaign worker Mary Jo Kopechne, may be the most What was he thinking? movie of 2018. The fact that Harvey Weinstein had a long list of enablers was bad enough. But in 1969, it wasn’t an anomaly for a group of powerful men to close ranks around one of their own, making his behavior seem acceptable to the public. It was business as usual.

Curran, working from a script by Taylor Allen and Andrew Logan, pieces together what may very well have happened on Chappaquiddick. Jason Clarke plays the Senator from Massachusetts, who, as the movie opens, is checking on the details for a Friday-night party he’s hosting on the Martha’s Vineyard island. His cousin and chief fixer Joe Gargan (Ed Helms) makes the arrangements. The guests are a group of young women who had worked on the 1968 campaign of the Senator’s late brother Bobby, who had been assassinated the previous year. Ted was fond of these ambitious, politically astute women and wanted to show his appreciation. Their campaign nickname had been “the boiler-room girls,” and one of them was Kopechne (played here by a thoughtful, precise Kate Mara).

In the movie’s vision, there’s a mild possible flirtation between Kopechne and the married Kennedy, though there’s no evidence of inappropriate behavior. Impulsively, the two leave the party to drive to the beach–Kopechne leaves her basket-shaped handbag on the table, a small, wrenching detail. Kennedy, clearly driving while drunk, veers off a bridge into a shallow pond, flipping and submerging the car. In a horrifying, split-second shard of a shot, Kopechne’s hand reaches out toward Kennedy as the vehicle flies out of his control. There’s terror in her eyes.

Within seconds, Kennedy surfaces, distraught, calling Kopechne’s name. And then, inexplicably, he trundles off the scene and heads back to the house–not to get help for his friend, but to alert the long-suffering Gargan so he can sort things out. Kennedy doesn’t report the incident until late the following morning. In between, he has brunch with some friends.

The rest of the movie shows how the devious machine established by family patriarch Joe Kennedy–by that point a gnarled, bedridden root vegetable with angry eyes, played here with alarming authenticity by Bruce Dern–pulled off, with Ted’s participation, a highly implausible semi-cover-up of the incident, thus saving the Senator’s congressional career. (The presidency, of course, remained elusive.)

With Chappaquiddick, Curran (The Painted Veil, Tracks) walks a tricky line, deftly: Should we feel revulsion for Kennedy, the spoiled overgrown kid whose family cleaned up his messes, or sympathy for the man who was left to carry the staggering legacies of his brothers John and Bobby? Clarke makes us feel plenty of things we’d rather not. His eyes are shadowed with profound decency one minute, and hollowed out in desperate calculation the next.

There’s plenty of evidence to suggest that Ted Kennedy, who died in 2009, was both haunted and motivated by his dead brothers’ achievements. His congressional record shows a man who fought hard for things he considered just, like the 1990 Americans with Disabilities Act and the Family and Medical Leave Act of 1993. But what if, even more than any supposed family curse, he was haunted by the memory of a woman’s face, of what she looked like just before she drowned in a submerged car that he had somehow managed to escape? Although Chappaquiddick doesn’t address Kennedy’s subsequent legislative record, it’s the silver-lining storm cloud that hangs over the movie. Human beings can end up doing good things for terrible reasons. How much more convenient it would be if we could just write them off altogether. 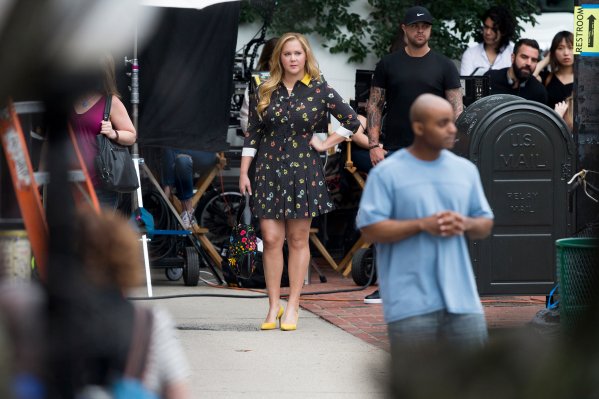 Amy Schumer Is Ready to Make More Mistakes
Next Up: Editor's Pick