You Were Never Really Here Is a Skillfully Crafted Thriller

When mainstream publications and websites draw up encouraging lists of female filmmakers who are currently working, they often neglect the formidable Scottish director Lynne Ramsay. Ramsay has made only a handful of films since her abrasively resplendent 1999 debut, Ratcatcher, but you can always count on her to challenge and to confound.

In that vein, Ramsay’s disquieting and skillfully crafted thriller You Were Never Really Here–adapted from a novella by Jonathan Ames–doesn’t let us off the hook. Joaquin Phoenix stars as Joe, a bedeviled military veteran who makes a living rescuing and returning missing girls. When he’s assigned to find the daughter of a Senator, a preternaturally sage wraith named Nina (Ekaterina Samsonov), he ends up achieving a kind of redemption, though it’s hard-earned. The essence of Phoenix’s performance comes through in the half-lit glow of his eyes; it’s as if there’s electricity running beneath his skin, but barely.

While some of the story’s plot elements are sordid and unsavory, most of the violence occurs off-camera; Ramsay is more interested in the aftereffects of brutality, though even her grisliest tableaux have a kind of serrated elegance. When she shows us a brazen, heroic rescue, it’s through the lens of a surveillance camera, in grainy footage drained of color. That device makes us look, hard, but it also deglamorizes any of the savagery we might detect in the corners of the screen.

By now you may be asking, why pay good money to see a movie that only enhances whatever feelings of dislocation we may already have? The movie’s lean, expressive score, by Radiohead’s Jonny Greenwood, is intense by itself: if the smell of burned rubber had a sound, it would be this. You Were Never Really Here is a demanding film, but it’s not a reckless one. To watch it is to see a rigorous and intensely creative filmmaker at work. No wonder Ramsay’s name doesn’t make it onto a lot of female-director lists. Her work defies the concept of cheerleading, or of special pleading. She’s a list unto herself. 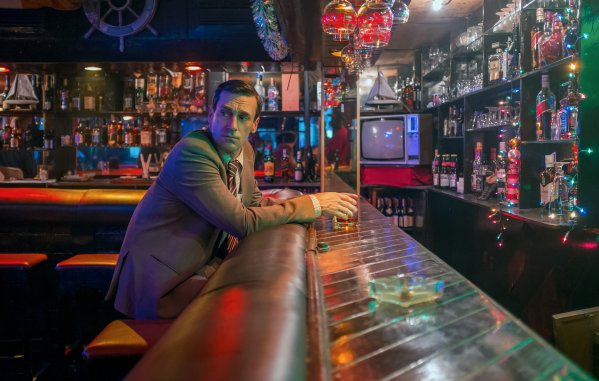 Beirut Raises Too Many Questions It Can’t Answer
Next Up: Editor's Pick