Amy Schumer on the set of a new movie filming on Tremont Street in Boston on Aug. 7, 2017.
Nicholas Pfosi—The Boston Globe/Getty Images
By Eliza Berman

Amy Schumer wrote her college thesis on the male gaze. Fifteen years later, she struggles to conjure the details. Did her subjects include Madame Bovary? Some Like It Hot? Particulars aside, she’s been inspecting the ups and downs of womanhood in her comedy ever since, right down to her latest project, the movie I Feel Pretty, out April 20. Schumer plays a woman who wishes she looked like a supermodel–and after sustaining a head injury in a SoulCycle class, she wakes up believing she’s got Cindy Crawford looks. Her newfound confidence allows her to flourish in some ways, but it also makes her lose sight of herself. Schumer plays this cocky bravado to great comedic effect, and she sees the movie as a serious response to the unremitting notion that women try to locate their self-worth in physical beauty. “I was always like that, at 5 years old, just demanding equality,” she says. “I thought it could all be fixed if you called attention to it.”

She’s telling me about little Amy in a New York City hotel suite where the handle to the bathroom door looks as if it belongs in the Metropolitan Museum of Art’s silver collection. On a table across the room is a wine glass, inexplicably filled with red rose petals. As Schumer puts it, “This is totally an affair hotel.” Upon arriving fresh from an interview with Howard Stern, she kicks off her skyscraping suede boots, props herself up on a pillow and–because it’s just us and this is what women do when men aren’t around to raise an eyebrow–unbuttons her pants, post–Thanksgiving dinner style.

It’s been a busy few years for Schumer, 36. She wrote and starred in the 2015 comedy Trainwreck, picking up a Golden Globe nomination for acting; released the best-selling book The Girl With the Lower Back Tattoo in 2016; and in 2017 made her Broadway debut in a play by Steve Martin. But before all of that, on four seasons of her Peabody- and Emmy-winning sketch-comedy show Inside Amy Schumer, she served up incisive satirical takes on the torments of modern womanhood. One of her most viral sketches, “Girl, You Don’t Need Makeup,” parodies One Direction’s “What Makes You Beautiful.” The original song purports to be about female empowerment while insidiously rewarding low self-esteem. In the spoof, a gaggle of fresh-faced lads encourage Schumer to remove all her makeup, then change their minds upon seeing the result: “I didn’t know that your lashes were so stubby and pale/ Just a little mascara and you’ll look female.”

I Feel Pretty, written and directed by Abby Kohn and Marc Silverstein, feels tailor-made for a performer who has spent years examining body image. “I would love to see a time in the near future where it’s not a special issue when they have someone who’s above a size 4 or a woman of color on a magazine,” she says. (In 2016, Glamour included her in a special plus-size fashion issue; she wrote on social media that she hadn’t been told about the theme.) When her character learns a hard-won lesson about where her value lies (hint: it’s not her appearance), the message is quickly co-opted by the company she works for to sell makeup. If some viewers are put off by this brand-driven empowerment, Schumer understands. She herself has joked in the past about Dove, whose “Real Beauty” campaign, featuring ordinary women, she says amounts to “patting themselves on the back, like, ‘Can you believe how brave we are for putting these f-cking dump trucks on television?'”

“It’s not a perfect movie,” she says of I Feel Pretty, which she also produced. “It would be great if my role had been played by a woman of color and there were more trans people in it, more people with disabilities.” She readjusts the pillow behind her. “But it’s a step in the right direction, I hope.”

A few days earlier, at the Comedy Cellar in Greenwich Village, Schumer takes the stage and introduces herself to the audience as a “very famous model.” Wearing a New York City uniform of head-to-toe black, with her blond hair pulled back in a jaunty ponytail, she surveys the crowd and revises her bio. “Actually, I’m a bag of mashed potatoes.” As Schumer told Jimmy Kimmel last fall, this description of her body–which, she adds, totally made her crave mashed potatoes–came to her care of an Internet troll.

Back in the hotel suite, she tells me, “A big part of becoming a funny person was a major defense mechanism. Onstage, especially as a woman, I’ve had to be really tough. The second you show a crack, the audience can literally leave.” When she started out as a comic, her goal was simply to coax laughter, and her bawdy humor–riffs on one-night stands and Internet porn–did just that. Eventually, she began to see comedy as an opportunity to inform audiences about issues she cared about. A writer later described her show as “sneaking shaved carrots into brownies,” she recalls, and the notion of a stealth agenda stuck with her.

Right now, though, she’s more interested in talking about overt agendas. She became a gun-control activist three years ago after a gunman opened fire at a showing of Trainwreck in Lafayette, La., killing two women. She’s also part of the Time’s Up initiative, which was organized in the wake of Hollywood’s sexual-abuse scandals. “Is this the biggest bummer of an interview?” she asks, aware that her monologue about the “nightmare” that is the Trump Administration (Schumer was an outspoken Clinton supporter) is not what readers might expect from one of today’s most reliable purveyors of laughs. She’s so bummed out by the political climate, she says, “I’ve been doing less standup, just because it’s not funny.” At one point in our conversation, tears come to her eyes.

She knows speaking out about political issues will directly impact her career. It’s happened before, when so-called alt-right activists organized to rate her Netflix special poorly. “There will be a movement on Reddit to try and get the movie voted down, to actually hurt me,” she says. “But I’m not going to let that slow me down.” She’s taking it upon herself to call out harmful behavior when she sees it. Just the other day, she corrected a male interviewer who called her a “lady boss,” calmly explaining that she’d rather just be called a boss.

She gets called out herself sometimes–an occupational hazard for a comedian for whom few subjects are off-limits. She recalls a 2016 tribute she made to Beyoncé’s song “Formation,” sanctioned by Beyoncé and released on Jay-Z’s streaming platform, Tidal, which was criticized as a white feminist’s tone-deaf response to an anthem of black female pride. “I knew what my intention was, but the intention didn’t really matter, and it upset people,” she says. “I’ve learned a lot since then. I don’t want to hurt anybody … I really am a chick from Long Island who’s just learning along with everyone. So whatever sh-t comes out of my mouth–and I f-ck up all the time–just know that I’m trying my best.”

After our interview, the elevator ferrying us to the lobby of the “affair” hotel stops, and two men in suits walk in. One stands with his back inches from Schumer’s face, like something out of Candid Camera. “Sir, that’s a little close,” she says, firmly but politely. He startles, apparently unaware of the intrusion. “A little personal space, please,” she adds. Not every fight is the Battle of Gettysburg. But for Schumer, even the little things are worth calling attention to. 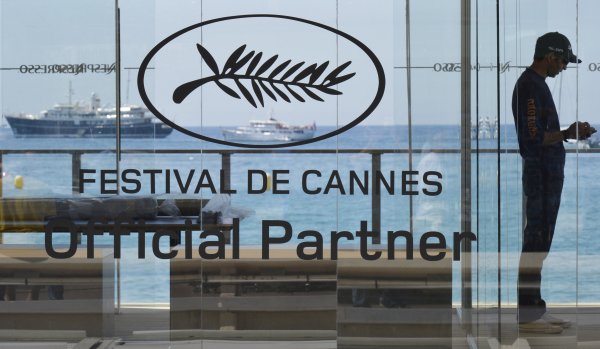 Here's Why Netflix Is Skipping Cannes This Year
Next Up: Editor's Pick