Can the U.S. Deter War Crimes Without Going to War with Syria?

Survivors and medical workers survey victims of the suspected chemical-weapons attack in the Damascus suburb of Douma on April 8
Emad Aldin—EPA-EFE/Shutterstock
By W.J. Hennigan

President Donald Trump had made up his mind about Syria. It was March 29, and to the cheers of the crowd at a campaign-style stop in Richfield, Ohio, the Commander in Chief declared that after 3½ years and billions of dollars sunk into the Middle East’s bloodiest civil war, America’s troops would soon be coming home. “We’re knocking the hell out of ISIS,” Trump said. “We’re coming out of Syria, like, very soon. Let the other people take care of it now.”

Caught off-guard, Trump’s advisers scrambled through the Easter weekend both to craft an exit strategy to fulfill his vow–and to come up with arguments on why pulling out might not be wise. Trump did not want to hear it. During a meeting with his national-security principals in the Situation Room in the White House the following Tuesday, the President laid into his military leaders, fuming about the U.S. costs in Syria and demanding a clearer time frame for withdrawal.

At one point, General Joseph Dunford, the Chairman of the Joint Chiefs of Staff and an opponent of a rapid pullout, responded to Trump’s venting by asking what, exactly, the President wanted to see happen in Syria. Trump said he didn’t want a drawn-out nation-building exercise, nor did he want to telegraph a pullout that would leave a power vacuum that militants could fill, according to two people familiar with the deliberations who spoke on the condition of anonymity.

Other advisers, like Defense Secretary James Mattis, who also sat in on the meeting and sided with Dunford, recognize that a Trump decision can be a bit like the weather: if you don’t like it, just wait, it may change. Indeed, on April 9, two days after an apparent chemical-weapons attack on Syrian civilians in the western town of Douma, Trump was preparing the public for a new engagement in the country. “We’re the greatest fighting force anywhere in the world,” Trump said, promising to act “forcefully” and soon.

But the about-face on Syria was about more than the indiscipline of a reliably inconstant presidency. The harder truth is that a U.S. President has no attractive options in Syria. Pulling out completely would cede the field to Iran–which Trump has sworn to combat everywhere in the region–and give new life to the ISIS and al-Qaeda elements that remain in the country. A deeper military engagement carries dangers as well. Every airstrike–and the U.S.-led military coalition has made more than 11,000 in Syria since 2014–risks drawing the U.S. into direct confrontation with the Russian forces that are backing Syrian leader Bashar Assad and working with Iran. Yet Trump called out Russia in tweets launched before the missiles he hinted at: “Get ready Russia, because they will be coming, nice and new and ‘smart!'” the President warned on April 11. “You shouldn’t be partners with a Gas Killing Animal who kills his people and enjoys it!”

Trump is navigating a stubborn reality with a new team of advisers chosen for their alignment with his worldview. At the State Department, former CIA chief Mike Pompeo, an inveterate Iran hawk, spent the days after the Douma attack assembling a coalition of forces to join in military action. Even more important, John Bolton has taken the reins as head of the National Security Council, which makes him Trump’s close strategic adviser on the Syria strategy. A longtime believer in the use of U.S. military force but an ardent opponent of nation-building, Bolton may well be in sync with Trump’s conflicting desires to retaliate against Assad, but also find a way to withdraw.

The first time Trump tried to project force in Syria, it took just three days for him to authorize missile strikes against Assad. He acted almost impulsively, without seeking congressional authorization, in what was the most significant military action of his then 11-week-old presidency.

Trump made that decision following a briefing at his Mar-a-Lago estate, where he was hosting Chinese President Xi Jinping. Trump was told that American radar and surveillance systems had detected a Syrian attack aircraft taking off from Shayrat air base before dawn, flying 75 miles north to a rebel-held area in Khan Sheikhoun and dropping a bomb. While the intelligence was convincing, it was the images posted to social media that tipped the scales.

Dina Powell, who was then the deputy National Security Adviser, had learned from Trump’s daughter Ivanka that photographs and charts could move him on foreign-policy questions. When Powell wanted Trump to respond to Syria’s use of chemical weapons, she showed him a presentation with photographs of children injured in the attack. The President quickly reversed course on his years-long campaign against unprovoked military involvement overseas.

“I will tell you that attack on children yesterday had a big impact on me–big impact,” Trump told reporters before authorizing the missile strikes. “My attitude toward Syria and Assad has changed very much … You’re now talking about a whole different level.”

The next day, Trump selected from three attack options, each intended to thread the needle between deterring Assad from using chemical weapons again without fracturing his grip on power. There were real fears that ISIS, al-Qaeda affiliates or other extremist groups would fill a vacuum. Just four hours later, two American naval destroyers launched 59 Tomahawk cruise missiles at Shayrat air base, destroying 20 Syrian aircraft, aircraft shelters, Russian-made radars and surface-to-air missile systems. The Pentagon later said that one-fifth of Syria’s jets were wiped out.

But Assad was not deterred from using chemical weapons–the forbidden munitions that were supposed to have been removed from Syria in a 2013 deal brokered by President Obama to prevent further attacks. Since Trump’s missile strikes, Assad has allegedly launched dozens of chlorine-gas attacks. Mattis holds Russia responsible. “The first thing we have to look at is why are chemical weapons still being used at all when Russia was the framework guarantor of removing all the chemical weapons,” Mattis told reporters on April 9. “And so, working with our allies and our partners from NATO to Qatar and elsewhere, we are going to address this issue.”

If last year’s strikes weren’t enough to deter Assad, then a repeat performance is unlikely to send the message, even if more allies are involved, says Frederic Hof, who advised Obama on Syria and worked on Middle East issues under the Reagan and George H.W. Bush Administrations. “If Assad comes to the conclusion that it is a one-off strike, the Trump Administration will have accomplished nothing,” Hof says. “The message to Assad, and the world, frankly, needs to be clear: There is a high price to pay if you develop and use these weapons against civilians.”

Any operation is likely to be fraught with risk, Hof says, because Assad’s forces are so tightly entwined with Iranian and Russian troops at various bases. The airfield that is believed to have launched the Douma attack–al-Dumayr air base, about 25 miles north of Damascus–has hosted Russian advisers. Russia and Iran have become the arbiters of Syria’s future, with their militaries having saved Assad in 2015, when his regime seemed to be on the brink of defeat.

A target list by the U.S. and its allies might include not only what’s left of Syria’s dwindling number of attack jets, but also the Russian warplanes at Hmeimim air base in northwestern Syria, or the facilities where Iran’s Revolutionary Guard officers advise Assad’s forces. Elimination of any of those targets would not break Assad’s hold on power–the Islamist-dominated rebel groups arrayed against him now having nearly been defeated–but it would greatly risk escalating American involvement. Either Iran or Russia could retaliate against U.S. ground forces, aircraft or warships in the region.

Still, there is consensus within the Administration that, even in a conflict that has killed some 400,000 people, the use of forbidden and horrifically damaging weapons must be punished. The Trump Administration has calculated that Assad’s defiance risks a domino effect around the globe.

“The last attack intended to degrade Assad’s ability to launch chemical-weapons attacks and deter him from using the weapons,” says Jennifer Cafarella, a senior intelligence planner at the nonpartisan Institute for the Study of War. “The Administration accomplished the first part of the mission, but obviously didn’t convince Assad not to use chemical weapons. We should expect a more convincing response this time.”

Conspicuous military action would also limit the damage done by Trump’s talk of walking away from Syria. The campaign-style statement “was a dangerous message to be sending to three regimes that are looking for any sign of American weakness and lack of American resolve and may be increasingly convinced Trump is a paper tiger–or maybe a Twitter tiger may be more apt,” says Mark Dubowitz, CEO of the conservative think tank Foundation for Defense of Democracies.

Bolton, even before his first official day on the job, worked feverishly on Syria policy proposals over the weekend and attended his first White House meeting as a leading player the night of April 9. Bolton supports plans for Syria that are aimed at blunting Tehran’s influence there, of which it has a great deal. Through proxy militias and regional allies, Iran has established an overland supply route that runs from Tehran, across Iraq and Syria, to Beirut, where Hizballah dominates both politically and militarily. It is a land bridge that has replaced air flights as a supply corridor in the region. On maps, it follows the same path as the “Shi’ite crescent” that Sunni rulers warned would come into being after the U.S. invaded Iraq and deposed Saddam Hussein, the Sunni despot who helped check Iran’s influence.

The Trump Administration wants more involvement from Sunni Arab countries to roll back Iran, says Luke Coffey, director of the Allison Center for Foreign Policy at the conservative Heritage Foundation. “They need to step up to the plate,” he says. “This is their backyard, so they should have just as much of an interest in confronting Syria and Iran as we do.”

Indeed, one Washington think tank recently presented the White House with a detailed plan centered around a phased American withdrawal from Syria that hands peacekeeping operations in eastern Syria to Sunni Arab allies. Saudi Arabian Crown Prince Mohammed bin Salman, who has said the U.S. military should maintain a presence in Syria, has also indicated a willingness to participate in a military operation against Assad for the chemical attack. “Trump’s instincts are always, ‘I want other people involved,’ and, ‘I want someone else to pay for this,'” says Jim Hanson of Security Studies Group, another right-wing think tank close to the White House. “Saudis are our new best friends, and it is definitely in their neighborhood.”

That may not be quite what Trump had in mind when he breezily told Ohioans that it was time to “let the other people take care of it now.” But it begins to square wishes with reality.

–With reporting by BRIAN BENNETT/WASHINGTON 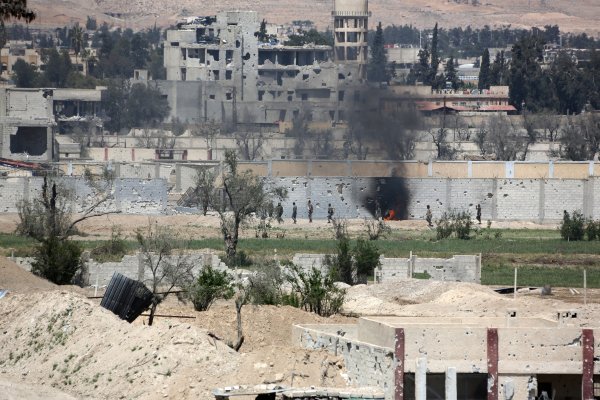 Trump Warns Missiles 'Will Be Coming' in Syria. It's Not Clear What That Will Achieve
Next Up: Editor's Pick