In the weeks since he went viral for yodeling in the aisles of a Walmart store, Mason Ramsey has visited the Ellen Show, become the subject of meme mashups, and earned an upcoming performance slot at the Grand Ole Opry. On Wednesday, things came full circle when Walmart threw Ramsey a concert at the same store in Harrisburg, Illinois where his performance first went viral.

Ramsey — an 11-year-old who has become affectionately known as “Walmart yodel boy” and the “yodeling kid ” — walked out on stage to a cheering crowd on Wednesday afternoon, before showing off his dance moves and performing a few songs, including Hank Williams’ “Lovesick Blues.”

Ramsey, who said he has been yodeling since he was 3 years old, also answered questions from fans, revealing that he would most like to collaborate with Blake Shelton and that his favorite performance ever was “this one here.”

“If the good Lord’s willing and the creeks don’t rise, I’ll see you all again next time,” he shouted at the end, referencing a country song made popular by Johnny Cash. 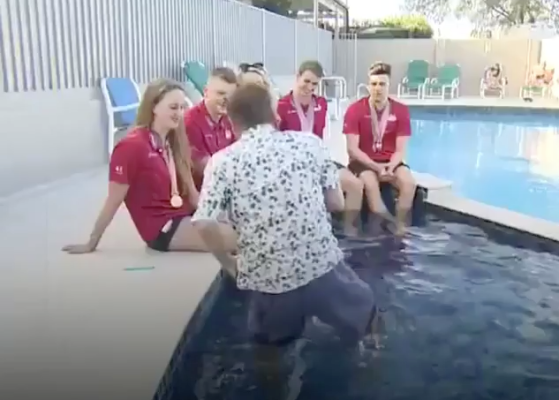 Reporter Falls Into a Pool on Live TV While Interviewing British Swim Team
Next Up: Editor's Pick