Trump Warns Missiles 'Will Be Coming' in Syria. It's Not Clear What That Will Achieve

President Donald Trump has warned Russia to “get ready” for missiles to be fired into Syria, in response to an alleged chemical attack over the weekend. In a tweet Wednesday morning, he told the Kremlin it should not partner with Syrian President Bashar Assad, a “Gas Killing Animal who kills his people and enjoys it!”

The U.S. believes Assad is behind a suspected attack in the city of Douma on April 7 that left at least 40 people dead, according to activists and rescuers. On Monday, Trump condemned the “heinous attack on innocent Syrians,” warning he would hold the responsible parties accountable. “You don’t see things like that…you just don’t see those images,” he said. “This is about humanity.”

Images from Douma, the last rebel-held city in Eastern Ghouta, showed civilians being hosed down in a makeshift hospital. Rescue workers shoved inhalers into mouths of small children. A man vigorously hit the back toddler trying to clear its airways. Later, videos shared by activists appeared to show families, lifeless and piled on top of each other on the floor of their home with white foam creeping from their mouths.

That gruesome footage has prompted Trump to again threaten military action against the Assad regime. Yet nearly four days on, the details of the attack still remain murky.

“What’s clear is that something terrible happened on Saturday,” says Joost Hiltermann, director of the Middle East & North Africa program at the International Crisis Group. As international condemnation mounts, the Syrian government and its ally Russia have denied using chemical weapons.

When the alleged chemical attack took place on Saturday in Douma, the area had already been under heavy bombardment. In February, the Syrian government launched a ground and air offensive to take back the last rebel held enclave near Damascus. That offensive has killed an estimated 1,600 people and 100,000 more. For weeks people have been hiding in the basements of eastern Ghouta.

Dr. Ahmad Tarakji, President of the Syrian American Medical Society (SAMS) says that could have been part of what contributed to the high toll of Saturday’s attack. The Syrian government has been accused of carrying out dozens of chemical attacks, largely using chlorine. Chlorine, more commonly a respiratory irritant that causes people to run outside, can be deadly. Potent chlorine, being heavier than air, sinks — this time into the basements where families had taken shelter.

“The basement becomes almost like a gas chamber,” says Dr. Tarakji. He says doctors on the ground reported symptoms consistent with both chlorine gas and nerve agent, particularly as fatalities also occurred above ground. SAMS believes 42 people died in the attack. Other organizations and activists have put the number much higher.

Experts say what needs to happen now is an investigation into Saturday’s incident, but it will take time. After the attack on Khan Sheikhoun in April 2017, which killed more 80 people, it took chemical weapons watchdog the OPCW and the U.N. six months to release a report confirming the attack used Sarin and blaming the government. But the U.S. had responded almost immediately after the attack, sending 59 missiles into a Syrian airbase.

This time Dr. Tarakji says the investigation may be even more difficult. Few doctors and civilians have been willing to provide firsthand accounts of Saturday’s attack. He says that may be because Douma is now experiencing a “transition of authority.”

Any retaliation against the Assad regime now would be of little help to Syrian rebels, who have already left the area. As the brutal images of Saturday’s attack emerged, so did news that the rebels had struck a deal to surrender in return for safe passage out. The Jaish al-Islam rebel group, which controlled Douma, had been in talks for weeks with Russia but were unable to make a deal.

Two other opposition groups already struck deals to evacuate, but Jaish al-Islam was a hold out. “So what they do is basically throw these chemical weapons and that will speed the process of surrender,” says Hassan Hassan, a resident fellow at the Tahrir Institute for Middle East Policy.

Hours after the alleged chemical attack, Jaish al-Islam finally agreed to surrender Douma in exchange for safe passage out to other rebel-held territory. Buses arrived Sunday to take out the fighters, along with their light weapons and families. By Monday, Russian military police were in the streets of the town. Dr. Tarakji says in this environment, people don’t feel free to talk, especially against the government.

“They are not going to speak out as they are trying to get on evacuation buses and get through checkpoints,” he says, adding that some of the people who aided the victims of the attack are now being evacuated. Civilians inside described chaotic scenes as the evacuation began and others debated whether to leave their homes in Douma or face an uncertain future under the government.

Many, in Syria and abroad, are urging an immediate international investigation and some worry that with the government retaking control of the area the evidence could be diluted or destroyed. The bodies of the victims, possibly the best source of evidence, have been buried in Douma, by their families.

An attack led by the U.S. now seems almost inevitable. In another showdown between Moscow and Washington, Russia vetoed a U.N. Security Council Resolution Tuesday calling for a new inquiry into chemical weapons attacks in Syria. Meanwhile, the U.N. and WHO, which both have offices a short drive away in Damascus, have not been able to access the site.

Hiltermann says if Trump carries out attacks now, he’ll be doing so in a “credibility gap,” but that if he waits, public domestic support of such an attack may drop. Trump’s strong words mean it will be difficult not to take some kind of action now.

“Where does this strong action against Bashar Al-Assad come from?” says Hassan. “He doesn’t want to be weak like Obama….He wants to say ‘I’m tough.” 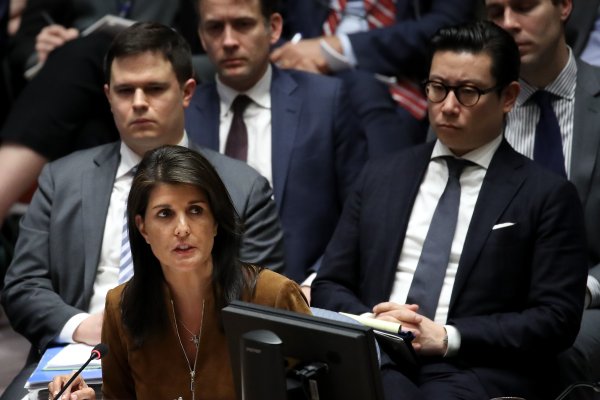 Nikki Haley Condemns Chemical Attack in Syria: 'Only a Monster Does This'
Next Up: Editor's Pick