China’s Xi Jinping Offers Trade Concessions, but They May Not Be Enough to Satisfy Trump

It was a conciliatory gesture, though far from surrender. Chinese President Xi Jinping moved Tuesday to dampen the roiling trade dispute with the U.S. by pledging to “significantly lower” tariffs on imported American cars and further open his nation’s markets to foreign investment, thus helping to stave off fears of an escalating trade war prompted by U.S. President Donald Trump’s accusations of unfair trade practices.

Speaking to business and world leaders on China’s holiday island of Hainan at the Boao Forum — branded as China’s answer to the World Economic Forum at Davos — Xi defended globalization, said he would to explore opening more free trade zones and actively promote multilateralism.

“China’s door will not close [to the world] and will only open wider and wider,” Xi told the audience, which included IMF chief Christine Lagarde, Philippine President Rodrigo Duterte and Hong Kong’s leader Carrie Lam.

It was Xi’s first major address since tensions between China and the U.S. spiked over alleged intellectual property (IP) theft and a trade imbalance, resulting in threats of over $150 billion in reciprocal tariffs between the world’s two biggest economies. Markets have been spooked as business leaders fear a full-blown trade war.

Addressing the trade imbalance at a cabinet meeting Monday, Trump said, “China has been taking advantage of the United States for many years … and they have really done a number on this country.”

By contrast, Chinese officials have characterized the spat as between Beijing-led multilateralism and nativist American unilateralism. “We should act on the vision of common, cooperative, and sustainable security and firmly uphold the international order and system underpinned by the principles in the U.N. charter,” Xi told Boao, slamming “Cold War” and “zero-sum” mentalities in a clear riposte to Trump’s broadsides.

Xi’s announcement of trade concessions is a positive development, though it remains to be seen how, or if, these measures come to pass. China has for years pledged to allow American credit cards into the country — most recently during Xi’s first encounter with Trump at Mar-a-Lago last April — though this has yet to happen. At Boao, Xi said the unspecified auto tariff reduction would take effect “this year” and access issues tackled “as soon as possible.”

In addition, as Trump’s goal is reducing America’s current record $375.2 billion trade deficit with China, which the former reality television star speciously claims has cost America millions of jobs and 60,000 factories, it’s unlikely that the sort of tariff reductions Xi proffered would do much to eat into this figure — and certainly not by the $100 billion Trump has targeted. “With a lot of effort, it might be possible to reduce this by $100 billion for a year, but not permanently,” says Derek Scissors, an economist focusing on China at the American Enterprise Institute.

Regarding Chinese IP theft, which a seven-month investigation by the U.S. Trade Representative alleges costs the U.S. between $225 billion and $600 billion every year, Beijing’s record is certainly poor. But American businesses told that same enquiry that China is taking some positive steps, in 2014 launching special courts to deal with IP that have received positive feedback. “China has been addressing this problem but not to the satisfaction of the U.S.,” says Nolt.

At Boao, Xi was keen to present China as a responsible world partner. He reaffirmed his commitment to low-carbon sustainable development and protecting the environment, a veiled reference to Trump’s widely condemned decision to pull out of the Paris Climate Agreement. Xi also championed his signature Belt and Road Initiative, a trade and infrastructure network tracing the ancient Silk Road.

“It’s a big thing for China to persuade people that it’s not just working for China’s interests,” says Kerry Brown, professor of Chinese politics at Kings College London. “To say that it’s presenting an indigenous form of globalization with Chinese characteristics has never been used before.”

Muddying the waters is whether the Trump administration has a more sweeping goal in sight than simply fixing a trade imbalance. In an op-ed in the London Financial Times on Monday, Trump’s notoriously Sinophobic White House Trade Advisor Peter Navarro painted the conflict with Beijing as an existential threat.

“Today, Chinese sovereign wealth funds and other state actors are scouring Silicon Valley trying to buy up the crown jewels of the American high-tech industry,” he wrote, adding that China’s GDP has grown from $1.3 trillion to $11.2 trillion over the past 17 years by breaking “every rule in the fair trade book on the way.” In February, FBI Director Christopher Wray even warned of a “whole-of-society” threat from China. “And I think it’s going to take a whole-of-society response by us,” he said.

The Chinese Communist Party — ably aided by its jingoistic state media — has long exploited the phantom of meddlesome Western nations determined to keep China down. The risk, now, is that we may have a White House that is giving that theory some legs, especially as Trump’s latest tariffs put in its crosshairs Xi’s “Made in China 2025” initiative to dominate a string of high-tech strategic industries.

“If your objective is to make China perpetually a small, compliant actor, that’s not going to happen, at least not without a huge amount of conflict — economically and potentially even militarily,” says Brown. “It’s economic at the moment but things can spiral out of control.” (On Tuesday, Australia’s Fairfax Media claimed that China and Vanuatu had discussed the possibility of Beijing stationing a permanent military based on the Pacific island nation, in what would be a direct challenge to Washington. Vanuatu reportedly denied the claim.)

But even if the dispute remains economic, the damage could be widespread and severe. Stock markets have already tumbled, and on top of the risk of falling profits for American and Chinese businesses, Nolt says the crisis could possibly leach into the financial sector, given many companies that export abroad borrow against future earnings and may have to default on that debt.

“For me, this is the most serious crisis in the post-War era in terms of trade and financial relations,” he says. “And it could become a much more general crisis that affects the whole world.” 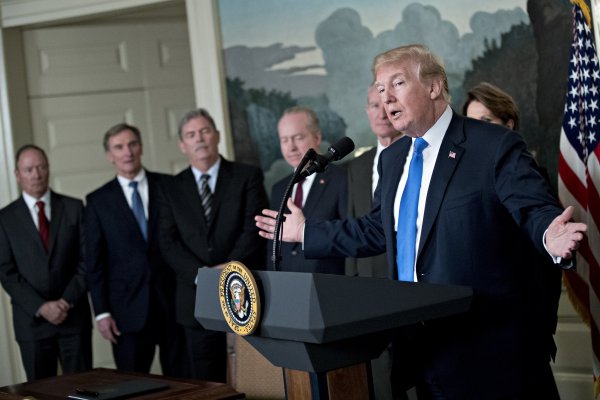 Trump's Trade War With China May Not Change Anything
Next Up: Editor's Pick