Why Tuesday Could Define Trump's Presidency

Historians judge presidents by how they react in times of crisis, and during an unseasonably cold April in Washington, Trump is facing two major ones: how to respond to a brutal chemical strike in Syria and what to do about investigations reaching his inner circle.

In both cases, Trump faces warring impulses between being the kind of decisive leader he likes to portray himself as and making a decision which could have lasting — and brutally negative — consequences for his presidency.

In Syria, Trump could decide that a suspected chemical attack crosses a red line, requiring a forceful military response against the regime of Bashar al-Assad. But he also risks further involvement in a war that he tried to disentangle the United States from just last week.

In the case of an FBI raid of his personal attorney, Michael Cohen, Trump also has an option for a decisive action: firing Attorney General Jeff Sessions or Deputy Attorney General Rod Rosenstein in an attempt to end the investigation of special counsel Robert Mueller. But he risks setting off a constitutional conflagration that he cannot control.

Inaction in either case could be just as meaningful, as both situations follow their own inexorable logic toward an outcome that Trump will have missed an opportunity to forestall.

Trump promised forceful action after images of children choking from a chemical attack flooded television news shows, but any strike could risk upending the already fragile situation in the Middle East and further mire the U.S. in a conflict the president hopes to get out of.

Then there’s how to react to the personal humiliation of his lawyer’s office and hotel room being raided by the FBI.

Trump didn’t try to separate the issues as he opened a critical meeting on Syria with his national security team late Monday with an unprompted diatribe against extraordinary investigative moves against Cohen, his longtime legal fixer.

“So I just heard that they broke into the office of one of my personal attorneys,” Trump said, unprompted, after reporters were ushered into the room. “Here we are talking about Syria and we’re talking about a lot of serious things – we’re the greatest fighting force ever — and I have this witch hunt constantly going on.”

Trump called the searches of Cohen’s office and hotel room “disgraceful” and “an attack on our country.” He blamed “Democrats” working on the investigation for targeting him and raised an echo of President Nixon’s abuse of political power during Watergate by saying officials “broke into” his lawyers office, even though the FBI had served a court-ordered search warrant, which experts say would have required multiple levels of sign-offs.

Trump glossed over the fact that the search orders against Cohen came from the Trump-appointed U.S. attorney for the Southern District of New York and not special counsel Robert Mueller. Nonetheless, Trump’s legal team believes the searches could be used by Mueller to pressure Cohen to cooperate in the Russia probe.

Asked later if he would fire Mueller, Trump replied: “Why don’t I just fire Mueller? Well, I think it’s a disgrace what’s gone on. We’ll see what happens.”

Most legal experts believe Trump can’t directly fire Mueller, and instead would have to first fire Rosenstein, who has authorized Mueller’s investigation, or replace Sessions, who has recused himself, with an attorney general willing to shut down the case.

Trump often has belittled and berated Sessions in an apparent effort to convince the former Alabama senator to resign. Trump said Monday he wouldn’t have named Sessions to the job if he knew he would recuse himself from overseeing the Mueller investigation. But Sessions has stuck to the job and pushed forward many of Trump’s campaign promises by enforcing hard-line immigration policies and stripping back Obama-era criminal justice programs.

Trump’s defense of himself and his lawyer nearly drowned out the news that Trump said he was close to making a decision on how to respond to the chemical attacks made by Bashar al-Assad’s government near Damascus.

Any U.S. action in Syria will have dramatic effects on the region, as U.S. allies jockey to counter efforts by Iran and Russia to project power and influence by backing Assad’s government.

All of this is happening in the wake of key departures of Trump staff who have been seen as stabilizing influences on the mercurial president. Trump’s longtime communications aide Hope Hicks left the White House last week.

Trump has shown signs of wanting to take bolder actions in recent weeks, ratcheting up threats of tariffs against China, surprising his staff by agreeing to meet North Korean leader Kim Jong-Un in May, and pressing lawmakers to give him more power to quickly deport immigrants coming to the country illegally.

But any decision-making on Trump’s part Tuesday will have to compete with hosting the Emir of Qatar, a nation Trump accused of funding terrorism last summer, and a country that hosts 11,000 troops in the largest U.S. military facility in the Middle East.

But this is the modern presidency: The opportunity to make defining decisions, even as minor distractions pile up. 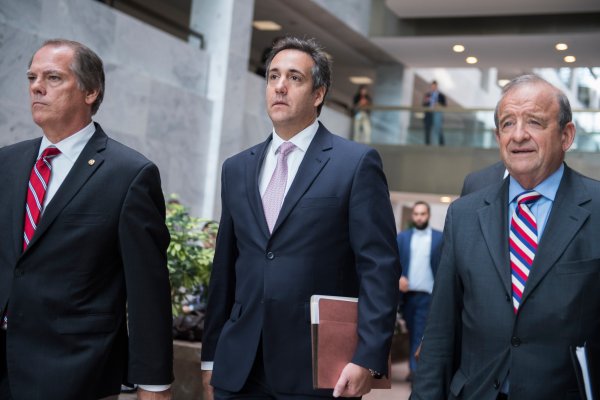 Donald Trump's Personal Attorney Is in Trouble
Next Up: Editor's Pick