Nikki Haley Condemns Chemical Attack in Syria: 'Only a Monster Does This'

U.S. Ambassador to the United Nations Nikki Haley on Monday condemned the recent chemical attack in Syria, warning that the U.S. would take action while speaking at an emergency meeting of the Security Council.

At least 40 people were killed Saturday in an alleged chemical attack in Douma, according to medics and opposition leaders, who believe the attack was carried out by the government of Syrian President Bashar al-Assad. The Syrian government has denied the allegations.

During Monday’s meeting, Haley accused Assad of targeting civilians and faulted Russia and Iran for enabling it.

“Who does this? Only a monster does this,” Haley said Monday. “Only a monster targets civilians and then ensures that there are no ambulances to transfer the wounded, no hospitals to save their lives, no doctors or medicine to ease their pain. I could hold up pictures of all of this killing and suffering for the council to see. But what would be the point? The monster who is responsible for these attacks has no conscience.”

One year ago, Trump said images of children dying because of chemical attacks in Syrian had moved him and led him to order missile strikes on a Syrian airbase.

On Monday, Haley accused Russia of supporting the attacks, saying Russia’s hands are “covered in the blood of Syrian children.” She urged the Security Council to take action.

“What we are dealing with today is not about a spat between the United States and Russia,” Haley said. “This is about the inhumane use of chemical agents on innocent civilians. Each and every one of the nations in this council are on record opposing the use of chemical weapons. There can be no more rationalizations for our failure to act.”

President Trump, who warned there would be a “big price to pay” for the chemical attack, said Monday that he would make a decision within 24 to 48 hours about how the U.S. will respond.

“We are beyond showing pictures of dead babies. We are beyond appeals to conscience. We have reached the moment when the world must see justice done,” Haley said at the Security Council meeting. “History will record this as the moment when the Security Council either discharged its duty or demonstrated its utter or complete failure to protect the people of Syria. Either way, the United States will respond.” 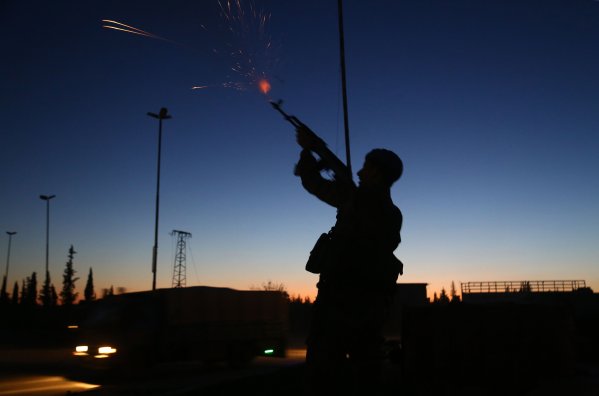 Why the Syrian Civil War Is Becoming Even More Complex
Next Up: Editor's Pick