Anton, who also worked in George W. Bush’s administration as a speechwriter, was one of the earliest and most vocal defenders of President Trump’s “America First” foreign policy, writing blog posts and essays defending Trump in the early days of the 2016 presidential campaign.

He earned plaudits as one of the few intellectuals on the Hill, and was described last year by the Weekly Standard as “a fast-talking 47-year-old intellectual who, unlike most of his colleagues, can readily quote Roman histories and Renaissance thinkers.”

According to Politico, Anton will be heading to Hillsdale College’s Kirby Center, the conservative, Christian school’s Washington, D.C. extension campus, as a writer and lecturer.

“I will be forever grateful to President Trump for the opportunity to serve my country and implement his agenda,” Anton told Politico.

Anton’s departure comes just over two weeks after President Trump fired national security advisor H.R. McMaster and less than one month after the ousting of Secretary of State Rex Tillerson. Unlike those administration officials, White House staffers said Anton was not at odds with the president.

Trump has “nothing but good things to say” about him, White House press secretary Sarah Huckabee Sanders told Politico.

“Michael is one of the smartest and most talented individuals I’ve ever worked with — not to mention an amazing chef,” said Sanders, who also called him a “true friend.” 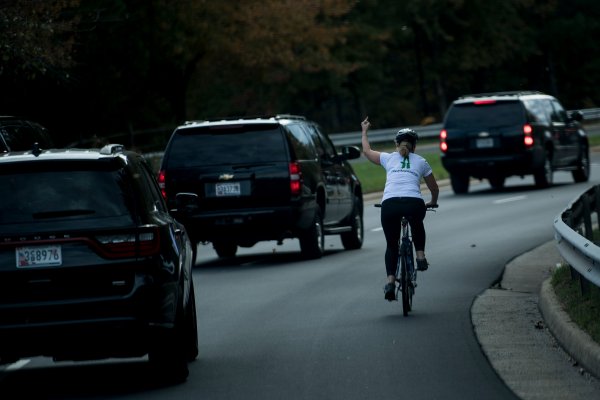 Cyclist Fired for Flipping Off Trump Sues Former Employer
Next Up: Editor's Pick