Treasury Secretary Steven Mnuchin participates in an interview during The Hill's Newsmaker Series "Prospects for Tax Reform" at the Newseum April 26, 2017 in Washington, DC.
Chip Somodevilla—Getty Images
By Bloomberg

Treasury Secretary Steven Mnuchin said Donald Trump’s attacks on Amazon.com Inc. have nothing to do with critical coverage of the White House by the Washington Post, owned by Amazon chief executive Jeff Bezos.

Mnuchin also said in an interview with CNBC that the administration is “in discussions with the Post Office and looking at that.” It wasn’t immediately clear what he meant, but Trump has repeatedly complained that Amazon doesn’t pay the Postal Service enough to deliver its packages.

Asked about Mnuchin’s statement about discussions with the Post Office, White House Press Secretary Sarah Huckabee Sanders said, “I’m not aware of anything specific taking place on Amazon but we are looking at ways to help the Post Office modernize.”

The Treasury secretary said the president’s criticisms of Amazon are based on concerns the Seattle-based Internet retailer and third-party sellers that use its website compete unfairly with small businesses.

The president has assailed Amazon and its business practices in a series of tweets and public statements since March 29, criticizing its delivery contract with the Postal Service and its tax practices. The attacks have raised speculation that Trump’s true concern is Bezos’s ownership of the Washington Post, which aggressively and critically covers him and his administration.

”Absolutely not,” Mnuchin said. “Okay, the president is focused on Amazon and the economic issues that are impacting retailers all around the country.”

The president’s company, The Trump Organization, leases space to retailers who could potentially compete with Amazon. Trump has never divested himself from the firm, though he has said his official actions won’t benefit his company.

“They’ve absolutely dominated the retail business,” Mnuchin said. “They’ve put tons of retailers out of business, so that is what the president is really focused on.”

While Amazon pays sales taxes in every state that levies them, third-party vendors that sell through the Amazon website sometimes do not.

“We don’t think that makes sense,” Mnuchin said. “It is unfair relative to the retailers.” 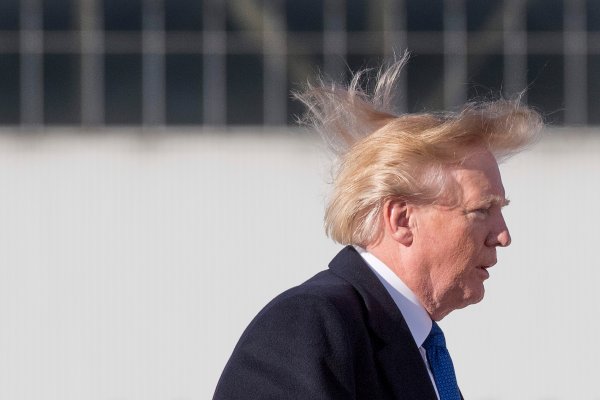 The Internet Can't Stop Cracking Jokes About Donald Trump's Hair Blowing in the Wind
Next Up: Editor's Pick