Why Trump's Trade War Could Cost Republicans the House

Republican insiders on Capitol Hill are trying to walk President Donald Trump away from a looming trade war with China, even as Trump’s economic nationalist advisers argue that this week’s high-stakes moves on tariffs are just a negotiation.

Political staffers who are tasked with keeping an eye on the GOP’s fortunes in this fall’s elections have urged caution as Wall Street was set to close out another rocky week driven by uncertainty.

But Trump and his economic advisers in the West Wing are treating the threat of U.S. tariffs on Chinese goods such as televisions, medical devices and batteries — and China’s threatened retaliations on American soybeans, corn and tobacco exports — as a negotiating ploy.

Newly minted White House economic adviser Larry Kudlow, a former CNBC analyst, told reporters on Friday that there are “back-channel discussions” taking place, providing no details. Meantime, Treasury Secretary Steve Mnuchin, speaking to Kudlow’s former employer, admitted “there is a level of risk that we could get into a trade war.”

Republican political sherpas sees the ongoing tit-for-tat on tariffs as a risky mix of bluffing, bravado and improvisation.

Setting aside the economic insanity of starting a large-scale trade war with America’s largest trading partner, the Trump gambit carries very real risks for his domestic plans. China’s proposed countermeasures take aim at the heart of Trump country — the areas where soybean, corn and tobacco farmers grow were also fertile territory for Trump votes. The president will need their support if he is to win a second term in 2020.

More immediately, Republicans in those places will need the support of those farmers and their neighbors if they’re to win re-election this fall, defend their majorities in the House and the Senate and give Trump a free hand to pursue other parts of his agenda. Should Democrats retake one or both chambers of Congress in November’s elections, White House advisers fear the bulk of 2019 and 2020 will be spent dealing with panels and investigations.

On a micro level, some of these races this year could hinge on what Trump does to local farming economies, such as Montana’s. The state’s lone Congressman, Republican Greg Gianforte, was a top target for Democrats this year even before the tariffs put the state in play. But Gianforte, who won his special election by 22,990 votes, represents a state with 45,246 farmers, according to the most recent Department of Agriculture Census. That survey says agriculture sales from Montana topped $4.2 billion in 2012 — or one-tenth of the state’s GDP. Any threat to agriculture would have a ripple effect throughout the state’s broader economy and psyche and could make Gianforte’s already tough re-election a steeper climb.

In Iowa, Rep. Steve King is seeking his ninth term representing the vast northwest corner of his state by linking arms with Trump, largely on their shared hardline views on immigration. King won there in 2016 with 54% of the vote (Trump carried it with 60%). But the district is the nation’s richest for hogs and pigs, per the USDA; more than $4.3 billion in sales in 2012 alone. The district is the number four when it comes to the number of total farmers (48,863) and number three when it comes to soybeans (4.6 million acres). Those farmers’ pork and soybeans could soon find themselves without eager Chinese buyers.

Democrats on the cusp may feel the benefits, too. Consider the Minnesota district that Collin Peterson has represented since 1991. The Democrat won his 14th term in 2016 by just 16,637, or roughly 5 percentage points. The most recent USDA Census says there are 49,146 farmers in Peterson’s district — the second highest number in the country. The same survey, from 2012, also found almost 4.4 million acres of soybeans grown there.

Or the neighboring Minnesota district where six-term Democratic Rep. Tim Walz carried in 2016 by 2,548 votes in a district with almost 2 million acres of soybeans, making it the ninth largest soybean district in the country. It is number-two for hogs and pigs, reporting $1.7 billion in sales, according to USDA data from 2012. The seat was a rare bright spot for Republicans, as Walz has left it open in order to run for Governor.

While most of the biggest farm districts are in Republican hands — and many of them safely so — there are no guarantees. Democrats were recently able to narrowly pick up a congressional seat in a Pennsylvania district that went for Trump by 20 percentage points. There are dozens of districts that are far friendly to Democrats, perhaps in the triple-digits, according to some analysts. Democrats need to net just 23 seats to claim the majority.

All of this is why Republicans like Nebraska Sen. Ben Sasse are sounding the alarm. His state, with its 45 million acres of farmland, stands to lose big in a trade war against China.

“Hopefully, the President is just blowing off steam again but, if he’s even half-serious, this is nuts,” Sasse said in a statement. “China is guilty of many things, but the President has no actual plan to win right now. He’s threatening to light American agriculture on fire. Let’s absolutely take on Chinese bad behavior, but with a plan that punishes them instead of us. This is the dumbest possible way to do this.”

Among the political hands at the White House, Sasse would find few objections. 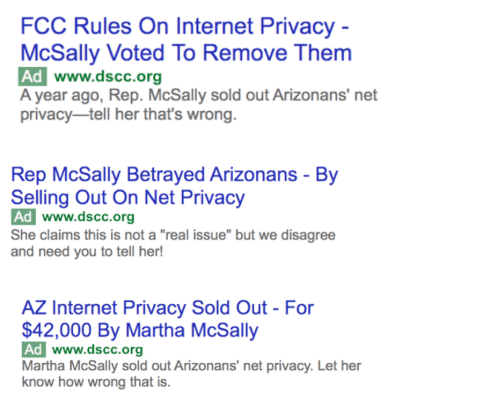 DSCC Runs Online Ads Against Martha McSally for Her Vote On Internet Privacy
Next Up: Editor's Pick