The Hidden Link Between Mass Shootings in the U.S. and the Global Economic History of the Firearms Industry

Since firearms became central to warfare, governments have faced a structural problem: They need gun manufacturers but do not generate enough demand themselves to keep those manufacturers in good health by serving the military alone. Peace, in particular, is bad for gunmakers.

The global history of governments’ and gun manufacturers’ efforts to cope with this basic problem is not fully understood, but it has had serious implications for the situation today.

The Glorious Revolution of 1689 established a new regime in Britain. It had to defend itself against rebels at home and abroad who wanted to restore the ousted king. To that end, the new government set about developing a new hub of firearms manufacturing in Birmingham, to ensure an alternate source for guns in case rebels captured London’s firearms manufacturing capacity.

For the next century, Britain was almost always at war, and Birmingham’s gunmakers thrived: from an initial annual production of tens of thousands of arms, they could produce millions by 1815. The government also launched its own factory, at Enfield, to further diffuse the industry.

To keep this industry healthy during interludes of peace—in an era in which firearms possession was largely an entitlement of the upper classes—the government helped it find other outlets. British gunmakers sold firearms all over the world: in West Africa, as part of the slave trade; in North America, to Native Americans and colonial settlers; in South Asia, as part of trade and conquest. Occasionally, British officials worried about arming their own enemies. But inevitably, the logic prevailed that not selling guns to potential enemies would merely send those enemies to a rival supplier, like the French, and the British would forfeit both profit and influence.

The government also encouraged gunmakers to diversify into products that could be sold to British civilians: buttons, buckles, harpoons, swords, bells. Diversification became more necessary in the 19th century as the empire’s fear of armed colonial rebellion increased. The Birmingham Small Arms company (BSA), the largest privately owned rifle manufactory in Europe until the 1890s and the largest in the U.K. through World War I, also made bicycles, motorcycles and cars. The government’s machine-gun supplier, Vickers, made various civilian goods, too.

This strategy freed the government from worrying overly about the health of its firearms industry. In 1934, it selected a Czech design for the new army light machine gun, over protests from BSA and Vickers. After World War II, the Ministry of Defense stopped maintaining an R&D team for small arms design. BSA ceased military rifle production in 1961 after a government decision to let them go. They turned out other metal goods and motorcycles until they were edged out of those businesses in the early 1970s.

The Royal Small Arms Factory at Enfield, meanwhile, did develop and supply the SA80, the standard postwar military firearm. In 1985, it and other government arms factories were made into a public corporation, Royal Ordnance, which, in 1987, was bought by British Aerospace, the then-reprivatized company in which Vickers had merged during the 1960 nationalization of the aircraft industry.

That year, 1987, was also the year of the mass shooting known as the Hungerford massacre. Gun control in the U.K. got tighter as the gun industry shrank to vanishing point. The next year saw both the closure of the Enfield unit and amendments tightening existing firearms controls. After the Dunblane shooting in 1996, private possession of handguns was banned almost entirely; thousands of guns were surrendered. By that point there was essentially no firearms industry to put up a protest; U.K. military arms were mostly sourced abroad. In Australia, too, passage of tight gun control laws in 1996 was eased by the absence of a major Australian gun industry.

To be sure, American gunmakers also diversified to cope with whimsical government demand. Most famously, Remington, the country’s oldest rifle maker, turned out sewing machines and typewriters during the slump in firearm demand after the Civil War. But, for the most part, American manufacturers could rely on sales to civilians to cope with lulls in government demand.

Between the world wars, the federal government and the American gun industry both opposed suggestions for controls on sales to civilians, out of fear that they would endanger an industry essential to national defense. During the Cold War, the U.S. became the new firearms depot of the world. When the Swedish firearms manufacturer Interdynamic AB could not find a civilian market for its TEC-9 submachine gun at home, its Miami subsidiary Intratec sold it to Americans, who made it a notorious instrument of mass shootings.

If gun-control advocates focus on the NRA and politicians who take money from the group as the sole obstacles to sensible gun control laws in the U.S., they’ll be missing a larger structural reality: selling arms to American civilians has become crucial to an industry on which both the United States government and governments around the world depend. Indeed, it is the American public’s very division over gun control that keeps the industry healthy, given the saturation of the civilian market: without panic buying triggered by recurring fear of impending controls, companies like Remington and Smith & Wesson face dismal prospects. (Remington has now filed for bankruptcy, though its operations remain unaffected.)

The more the rest of the world limits gun possession, the more American civilians keep the world’s firearms makers in business. The NRA and gun manufacturers benefit from promoting intense cultural and ideological commitment to their reading of the Second Amendment, but so does every government that needs firearms for its military and law enforcement services. Studies have shown that the presence of astronomical numbers of guns in the United States is a specific cause of the high rate of mass shootings, but the presence of those guns has become a matter of global security. This vision of global security has thus perversely come to depend on continual insecurity about mass shootings in the United States.

Priya Satia is the author of Empire of Guns: The Violent Making of the Industrial Revolution, available now. 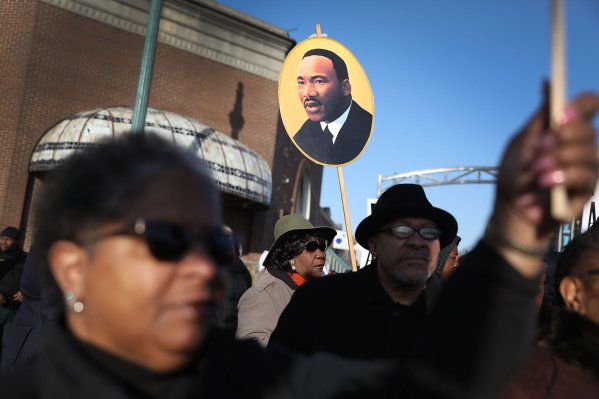 What Was Missing From Memphis on the 50th Anniversary of Martin Luther King Jr.'s Assassination
Next Up: Editor's Pick