How Robert Mueller Is Learning from Ken Starr's Mistakes

Special counsel Robert Mueller’s investigation into Russian meddling in the 2016 election could not be more different than Ken Starr’s probe of Bill Clinton’s behavior in the 1990s.

While Starr’s probe shifted focus from real estate deals to the president’s infidelity, Mueller’s has stayed methodically focused on Russia. While Starr’s investigation drew out to four years, Mueller’s team has worked quickly to secure indictments and guilty pleas from some key players in his first year. And while Starr’s team leaked constantly, Mueller has often surprised everyone when he filed charges.

It remains to be seen how the probe’s ends will differ. Starr’s team eventually sent a report to Congress that led to Clinton’s impeachment on charges of perjury and obstruction of justice. Mueller, who is operating under a different law, will send a report to Deputy Attorney General Rod Rosenstein, who will then decide what to share with Congress and the public.

However it ends, legal experts give Mueller high marks for avoiding some of the pitfalls that damaged Starr’s efforts. Here’s a look at how he’s avoided three mistakes that hurt his predecessor.

Mueller is staying on topic

Starr’s investigation initially began as a look into Clinton’s real estate investments in the Whitewater Development Corporation, but ended up exposing sordid details of an affair between the president and a White House intern. The shift in focus of the investigation was sensational and polarizing.

“We would all be better off if Starr had exercised his prosecutorial discretion and left the White House Kama Sutra a closed book,” TIME wrote in 1998. “What the President did ranged from the silly to the squalid, but the investigation is worse, turning a private mess into a public eyesore.”

Then-First Lady Hillary Clinton famously referred to a “vast right-wing conspiracy” out to get her husband as revelations about his affair with Monica Lewinsky and other scandals came out. Trump has accused the Mueller investigation of bias, too, tweeting — somewhat inaccurately — in March, “Why does the Mueller team have 13 hardened Democrats, some big Crooked Hillary supporters, and Zero Republicans?”

But Mueller’s own motives haven’t been impugned by as many neutral observers the way that Starr’s were.

“If Bob Mueller has a strong partisan streak or ideological streak, he keeps it to himself,” says Barbara Perry, University of Virginia’s Miller Center of Public Affairs, who spoke to TIME as part of a new presidential-history partnership between TIME History and the Miller Center.

Recently, Paul Manafort, Trump’s former campaign chairman, argued that Mueller exceeded the scope of his own investigation by charging him with crimes including money laundering that occurred before the 2016 campaign. But a newly released memo shows that Mueller was explicitly authorized by Rosenstein to investigate crimes related to payments Manafort received from the Ukranian government during that time.

“Mueller is a former prosecutor and a former investigator, and he is going to stay focused and keep his eye on the ball,” says Peter Zeidenberg, former deputy special counsel in the Scooter Libby case who worked with Mueller at the Justice Department. “And the ball is Russia.”

The independent counsel investigation of Clinton lasted for four years, and impeachment proceedings extended beyond that.

“He had to go slow,” TIME wrote of Starr in its 1998 Man of the Year issue. “To nail a politician as elusive as Clinton, he had to be maniacal in pursuit of the facts. To turn lowlife behavior into high crimes and keep going when a majority of the public wanted him to hang it up, he had to be not just dogged but extremely confident — many would say far too confident — of his own fairness and judgment.”

But this slow pace hurt Starr’s reputation and the perception of his work. “Most damaging for Starr was that, as the probe dragged on, the public grew impatient with the prosecutor,” TIME wrote in a 2000 book review.

No one knows how much longer Mueller’s investigation will last, but the fact that he’s already charged 19 people in less than one year at least shows he’s proceeding at a relatively rapid clip.

“We don’t want it to be spread out,” says Solomon Wisenberg, who was second-in-command in the Whitewater/Lewinsky investigation. “It’s not good for the country if it’s spread out for four or five years… [Mueller is] being sensitive to that problem.”

And experts say that moving quickly could help avoid the first trap of getting bogged down or veering off topic. “[Mueller] doesn’t waste time digging,” says Zeidenberg. “If something isn’t fruitful and isn’t producing, he’s going to move on.”

“Ken Starr’s record for leaking was notorious,” Lanny Davis, who served as special counsel to Clinton, told Vox. And as leaks flowed from Starr’s office, his reputation and the public’s respect for the investigation became more and more damaged — especially in an investigation that uncovered such a titillating story.

“If you leak, it gives ammunition to political opponents who can then try and attack you,” says Zeidenberg. “It makes your job way more difficult, and you’re just handing the other side ammunition to bash you around with.”

By contrast, Mueller has run a tight ship, clamping down on leaks coming from his investigation and staying in the background even as the Trump Administration leaks profusely. Mueller has “long gotten used to the 24/7 news cycle and [seen] the impact of social media,” says Perry. “Whereas Ken Starr was tempted into that space, Bob Mueller, I think having the wiser head about things like that, was not.”

Plus, Perry muses, “Don’t we think Bob Mueller … is going to be especially careful that things don’t get out and get into social media, especially when the very president he’s investigating is a tweeter?” 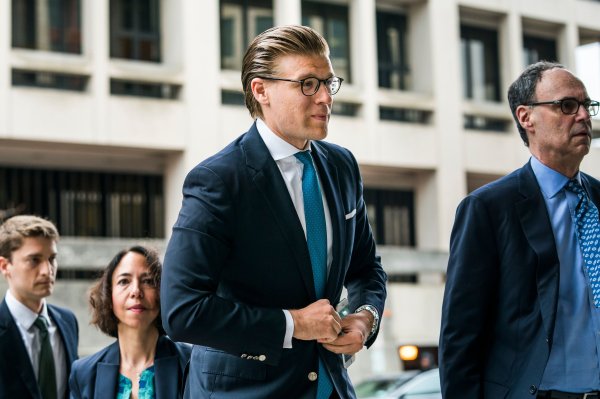 Who Is Alex van der Zwaan? Meet the First Person Sentenced in the Russia Probe
Next Up: Editor's Pick