Child Abuse Claims Could Be Key to Answering Mystery Question in California Cliff Crash: Why?

Two weeks after a family of eight plunged off a California cliff in an SUV, investigators remain bewildered by how little they know about the Harts, who homeschooled their children and faced allegations of child abuse stretching back 10 years. Jennifer and Sarah Hart and three of their children — Markis, Jeremiah and Abigail — were killed in the crash, which authorities now suspect was intentional. Police believe the Harts’ three other children were also in the car, though their bodies have not been found.

Mendocino County Sheriff Tom Allman, who is in charge of the investigation, told TIME he is left with three vexing questions: “Why did this happen? How did this happen? And what can we — and I’m talking we as a government — do to prevent this from happening again?”

“Those are my three questions that I ask myself every day. And I do not know the answers to any of those three,” he said.

Allman said he is concerned by a pattern of child abuse reports against the Harts — which he sees as “a piece to the puzzle” — and by the lack of skid marks at the site where their car went off the cliff. There were no suitcases or sleeping bags found in the vehicle or at the scene, no one in the car was wearing a seatbelt and no one appears to have known the Harts were leaving town.

Police are still searching for three of the Hart children — 16-year-old Hannah, 15-year-old Sierra and 15-year-old Devonte — but Allman said he has no reason to believe they were not inside the vehicle at the time of the crash. On Saturday, a body was recovered near the site of the crash, but authorities have not yet confirmed the identity.

Meanwhile, child abuse allegations dating back to 2008 have created a troubling picture of the family’s life. Neighbors and teachers in multiple states reported potential abuse, as the family moved from Minnesota to Oregon to Washington. One complaint came before the Harts formally adopted their last three children from Texas in 2009, and another complaint, which resulted in a misdemeanor domestic assault conviction, came before they pulled all six of their children out of public school in 2011 to pursue homeschooling.

In September 2008, one of the Hart children, who was 6 at the time, told a teacher about being struck with a belt on the arm, according to a police report that did not identify the child by name. When interviewed by police, both parents said Jennifer Hart had hit the child with a belt. They also said the child had fallen down a set of stairs and was having “food issues” that included stealing other people’s food at school and eating out of garbage cans or off the floor.

Months later — in February 2009, according to CNN — the Harts finalized the adoption of Jeremiah, Sierra and Devonte.

In November 2010, an allegation of abuse surfaced again, when one of the Hart children told a teacher “that she had owies on her tummy and her back,” according to a police report. The girl said “that her mom had put her in the bathtub and turned on cold water and then hit her” with a closed fist “because she had found a penny in her pocket.” While the girl said Jennifer Hart had hit her, when interviewed, Sarah Hart said she had been the one to spank their daughter. “By Sarah’s own admission, she stated that the spanking got out of control and was not proper and was ‘too much,'” the police report stated.

Sarah Hart was charged with malicious punishment of a child, which was dismissed, and misdemeanor domestic assault. She was convicted of the latter charge on April 7, 2011 and sentenced to community service and a year of probation. Two days before the sentencing, all of the Hart children — in kindergarten through 7th grade — were pulled out of the public school system for homeschooling, according to district records.

In 2013, a family friend told Oregon child welfare officials that she had witnessed “controlling emotional abuse and cruel punishment” toward the children, but was later told by the Oregon Department of Human Services that there was not enough evidence to make a case.

“My heart is completely broken,” Alexandra Argyropoulos said in a statement to the Associated Press last week. “The current system failed to protect these children from their abusers.”

The family’s neighbors in Woodland, Washington, Bruce and Dana DeKalb, told the Associated Press that last year, one of the Hart girls rang their doorbell in the middle of the night, “saying we needed to protect her.” “She said that they were abusing her,” Bruce DeKalb told the AP.

The couple called child services on March 23 after Devonte came to their house multiple times asking for food. No one answered the door when child services officials arrived at the Harts’ house on that day. By the next morning, the Harts had driven out of town. On March 26, their SUV was found at the bottom of the California cliff.

Norah West, a spokesperson for the Washington Department of Social and Health Services, said the agency had no contact with the Hart family prior to the visit on March 23. West said agencies in different states share information on a “case-by-case basis.” The lack of a national registry of child abuse reports and investigations can pose a challenge in identifying and stopping abuse as parents cross state lines.

“I think social workers and child healthcare workers have some of the most difficult jobs in state government, and it comes with a number of challenges,” West told TIME. “We don’t know about any potential abuse or neglect unless someone refers it to us.” 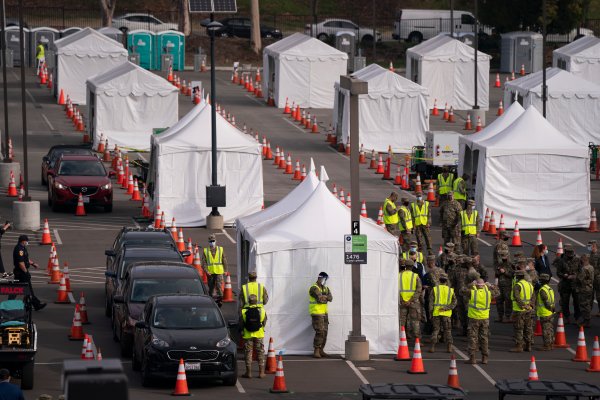 COVID Vaccine Delivery System Starts in Parts of CA
Next Up: Editor's Pick