To quote Will Ferrell in the hit movie Anchorman, “Boy, that escalated quickly.”

Talk of a trade war between the world’s two biggest economies had already spooked markets following Wednesday’s announcement that China planned to tax $50 billion in American goods — including soybeans, whiskey and aircraft — in response to an earlier proposal by Washington to slap a similar hike on 1,300 Chinese products.

Hopes that the tussle was simply posturing before a negotiated outcome were dampened after Trump instructed his secretary of agriculture “to implement a plan to protect our farmers and agricultural interests.”

“China’s illicit trade practices — ignored for years by Washington — have destroyed thousands of American factories and millions of American jobs,” Trump said in a statement. A seven-month investigation by the U.S. Trade Representative found that “Chinese theft of American IP currently costs between $225 billion and $600 billion annually.”

The spat spotlights the tension between Trump’s promises to narrow the current $375.2 billion U.S. trade deficit with China, which he claims costs American jobs, and Chinese President Xi Jinping’s ambitious development plans, which include eradicating poverty from the world’s most populous nation by 2020.

Simon Baptist, chief economist at the Economist Intelligence Unit, told TIME by email that Washington has legitimate complaints about China’s IP protection record, but responding with trade sanctions paints the U.S. as the trade aggressor. “A better approach would have been to take action through investment and patent rules,” he says.

By virtue of the trade imbalance, the U.S. has the potential to hurt China more than the other way around through the tariffs. If imposed, analysts say China can expect a significant number of bankruptcies and rising unemployment. China is targeting a healthy if slowing 6.5% growth this year.

However, protecting American agriculture is not simple. For one, China may take any new government support into account when calculating future tariff retaliation, nullifying that support’s impact. Secondly, for the U.S. to boost farmer subsidizes would bring third parties into the dispute — especially large producers such as the E.U., Brazil and Australia — who at the very least would complain to the WTO.

“I think it would have been more effective to go to the Chinese with a series of trade allies and say, ‘it’s all of us saying this, we’re all going to act unless you change your policies and we’re all watching to see what you actually do so,’” says Derek Scissors, an economist focusing on China a the American Enterprise Institute.

Fixing the IP issue is also no simple manner. While China needed foreign cash early in its economic liberalization and development in the 1980s and 1990s, for the last decade the country has been financially buoyant. Since then, the very point of foreign investment has been to engineer IP transfer, which is generally done by forcing foreign firms to partner with local Chinese entities — essentially enabling those entities to pilfer IP. Western firms have been so desperate to access the Chinese market that they agreed to operate under those terms — and are now paying the price.

“One guilty party in all of this are U.S. firms themselves, many of whom have actively assisted in ‘voluntary’ technology transfer through joint ventures in order to access China’s domestic market,” adds Baptist.

As such, addressing the IP issue would involve China changing the entire way it interacts with foreign investment. And while leveling the playing field is a noble goal in itself, the question remains whether volatile markets and falling profits across the U.S. economy are a price worth paying to get there.

“Does the U.S. have a plan to actually pursue and at least partly win this trade war? I don’t see that,” says Scissors. “So if I were an American company, I’d be nervous that you’re going to take this pain for the next few years and end up with nothing really different than where you started.” 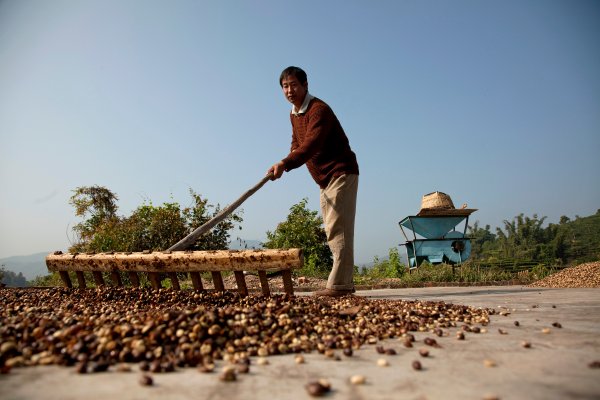 Coffee Is Gaining Ground in China's Tea-Growing Region
Next Up: Editor's Pick