What Was Missing From Memphis on the 50th Anniversary of Martin Luther King Jr.'s Assassination

On the night of April 3, 1968, as Martin Luther King Jr. delivered his final public speech, rain poured down on Memphis. Inside the walls of Mason Temple, King urged his audience to keep fighting for racial and economic justice — in Memphis, in America, around the world. He concluded by proclaiming that God had given him the opportunity “to go up to the mountain,” from which he’d looked out and seen “the Promised Land.”

“I may not get there with you,” he thundered, “but I want you to know tonight that we, as a people, will get to the Promised Land.”

He was murdered less than 24 hours later.

Fifty years later, on the night of April 3, 2018, the skies opened up over Memphis once again, almost as though history were trying to exert itself with special force. As crowds gathered inside Mason Temple to pay tribute to King, and as organizers at the National Civil Rights Museum (housed in the old Lorraine Motel where King was assassinated) prepared for a full Day of Remembrance for King the next day, lightning cut the sky and the clouds spat rain. The deluge seemed appropriate.

By the next morning, the skies had cleared. Outside the union headquarters of AFSCME local 1733, crowds began to gather for a rally to remember King, and to celebrate the sanitation workers in whose company he died. The events were spearheaded by AFSCME and the Church of God in Christ, and were organized under the masthead of their “I AM 2018” campaign. The speaker’s rostrum reflected the “I AM” campaign’s goal of economic justice. It also reflected its origins in the labor movement. Leaders of many of the major unions in America, including Lee Saunders and Richard Trumka, testified to King’s legacy and of to the need to rebuild and protect a robust union movement in this country. William Barber spoke on behalf of the Poor People’s Campaign: A National Call for Moral Revival. Bernie Sanders was on hand, as well, linking King’s labors to modern fights for universal healthcare, a living wage and environmental justice. (Democratic National Committee Chairman Tom Perez had the unenviable task of being slotted between them.)

In death, as in his life, Dr. King has loomed large in the American psyche. In 2018, he is perceived as universally claimable and has, by consequence, routinely been claimed. Sometimes this leads to deployments of King’s legacy that are controversial or just plain incorrect. But progressive social movements of many various stripes have also long claimed King, and with good reason.

So, outside AFSCME headquarters on Wednesday, it was impossible not to wonder where those other fights were. This was a program about economic justice and just one program out of many. And labor, of course, deserves its day. It was instrumental in creating an American middle class to begin with, and despite that fact, it’s been under assault for generations. Moreover, it’s true that Martin Luther King died as a martyr to the labor movement (among other things). Union activists are right to claim him.

But it was striking that, in a program that stretched for hours, almost no one said the words “Black Lives Matter,” or even talked about that movement — which, consciously or not, takes direct lessons from many of King’s most forceful arguments about and critiques of America. Almost all of the speakers were men, and they were remarkably vague, bordering on silent, about women’s and LGBTQ rights. Greisa Martínez Rosas, Deputy Executive Director of United We Dream, offered a rousing defense of undocumented immigrants, but issues facing Islamic-Americans were mostly absent.

While it may seem unreasonable to ask any program to cover every base, the narrow focus of this event — one of the two most high-profile public events happening on the Day of Remembrance — does matter, and it matters quite a lot. As King remembrance events were escalating on April 3, a number of prominent activists, including Black Lives Matter’s Keedran Franklin and Fight for $15’s Ashley Cathey, were arrested by Memphis Police Department as they protested outside an immigrant detention facility. In the middle of a moment of silence to remember King on Wednesday evening, officers with the Shelby County Sheriff’s Office rode motorcycles — casually enough to display no urgency, loudly enough to display little respect — down Main Street in Memphis, less than a hundred yards from the Lorraine Motel balcony. And it was only a week ago that 17-year-old Dorian Harris, after allegedly stealing a beer from a convenience store here, was shot and killed by a store clerk as he ran away. The clerk never called 911, and Harris’s body laid outside in a Memphis yard for two days before it was called in.

To be in Memphis right now is to be inspired by events unfolding here, and buoyed by the possibilities that they present. But it is also to be reminded of the fact that they will remain only possibilities without hard work spent building lasting coalitions across whatever lines might cleave us from others seeking to build a more beloved community. How and whether Americans successfully build those coalitions remain very urgent questions. And those questions were the ones that went largely unspoken on this day of commemoration. Many of King’s battles still need to be fought, and each deserves its moment in focus. But in order to truly represent his legacy, and move us forward, they must continue to appreciate the interconnected nature of these struggles. Indeed, as King himself reminded us, “No one…will be free until we all are free.”

At 6:01 on Wednesday night, in front of the Lorraine Motel, bells tolled 39 times, one for each of King’s years. It was a profoundly moving, and profoundly sad, moment.

King, like most of us, was not perfect at bridging all of the divides that society artificially constructed around him. But he sensed the urgency of trying to bridge those that he could recognize as bridgeable, and worked to do so throughout his life. That seems like a fortifying, indeed a hopeful, fact. And this notion accords with how many American choose to distill King, considering him through a prism of hope.

This makes some sense given King’s public pronouncements of hope (despite his private and public despondency about racism, militarism and capitalism), but hope is actually, of course, not nearly enough. As my friend Charles McKinney, who teaches Africana Studies at Rhodes College in Memphis, has been known to say regarding those who simply hope for a better world, “The hope is in the work.”

King knew that better than anyone. He hoped, yes. But he also labored relentlessly — to the point of exhaustion and depression, in the face of violence, arrest, incarceration, and in opposition to the intransigence and often active resistance of state, local, and federal-level instruments of government. He was killed while working toward — not hoping for — a better world.

The final book that King wrote was entitled Where Do We Go from Here: Chaos or Community? That remains the crucial question. King worked to build community, and to dialogue with those who society considered far too “radical” — from rioters to gang members to Black Power activists. He disagreed with all of them. And yet he labored hard, day after day, to understand where they came from and locate the ground they might find in common. That search — for community, and a place to go — remains our central question.

Simon Balto is an Assistant Professor of History and Director of African American Studies at Ball State University. He is the author of the forthcoming Occupied Territory: Policing Black Chicago from Red Summer to Black Power, which will be published by the University of North Carolina Press. 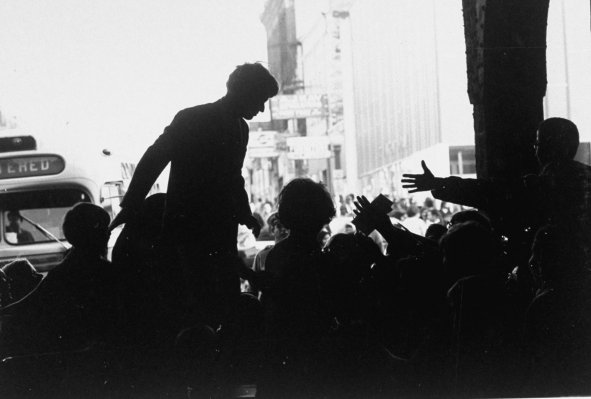 What Made Robert F. Kennedy's Speech on Martin Luther King Jr.'s Death So Special
Next Up: Editor's Pick