Trump and Xi walk together at the Mar-a-Lago estate in West Palm Beach, Fla., on April 7, 2017
JIM WATSON—AFP/Getty Images
Ideas
By Ian Bremmer
Bremmer is a foreign affairs columnist and editor-at-large at TIME. He is the president of Eurasia Group, a political-risk consultancy, and GZERO Media, a company dedicated to providing intelligent and engaging coverage of international affairs. He teaches applied geopolitics at Columbia University’s School of International and Public Affairs and his most recent book is Us vs. Them: The Failure of Globalism.

One year ago, President Trump welcomed China’s Xi Jinping to his Mar-a-Lago estate. Despite predictions that different temperaments would make for an uneasy encounter, the meeting helped the nations work closely on North Korea and avoid a trade conflict.

Still, this is an election year in the U.S., and Trump wants supporters to see that he’s keeping his promises to get tough on China and trade deficits. After he announced tariffs on steel and aluminum imports in March, he got a lot of pushback–from U.S. businesses that need cheap steel, allies who export steel as well as Republican governors and lawmakers. The Administration then announced exemptions from tariffs for Europe and countries including Canada, Mexico, Brazil and South Korea. But not for China, which has alienated many U.S. businesses by restricting market access and stealing their intellectual property.

This fight is about more than trade, though. Not long before Trump announced those tariffs, he signed into law the Taiwan Travel Act, which allows officials at all levels of the U.S. government to travel to Taiwan to meet their Taiwanese counterparts, and for high-level Taiwanese officials to enter the U.S. Although this move reversed a nearly 40-year-old policy, the story got little play in most American media. Not so in China, where some state officials saw this open rejection of the “One China policy” as evidence that U.S. trade action is designed not to revive American manufacturing but to block China’s expanding influence.

Amid all this was a divergence on North Korea. Beijing was not happy that Kim Jong Un went so directly to Trump with an offer to meet–and that there has been no statement that a Chinese representative will be present.

Meanwhile, Trump declared on March 22 that he intends to impose $50 billion in tariffs, this time targeted directly at China. Trump says there will be more unless Beijing takes actions that knock $100 billion off the bilateral trade deficit.

On April 2, we saw China’s first response: tariffs on 128 goods from the U.S. worth $3 billion, with the threat of more to come, as a reply to the initial steel and aluminum gambit. The proportionate response from Beijing signaled that China doesn’t want a fight but won’t back down if Trump escalates. On April 3, the Trump Administration revealed its list of recommended Chinese products to target in his broader tariff proposal–including more than 1,300 of them. On April 4, China sharply upped the stakes, with tariffs on U.S. goods worth about $50 billion.

There is a risk of further escalation, because both sides believe they hold the stronger hand. Trump knows that China’s economy is susceptible to trade action, since it depends on it more than the U.S. does. According to the World Bank, 37% of China’s GDP comes from trade–though that’s down from more than 65% in 2006–vs. 27% for the U.S. That creates a vulnerability for China.

But Trump is more politically vulnerable than Xi. It’s not an accident that among the U.S. goods targeted by China are ginseng and pork, products that will hurt farmers and business owners in states like Wisconsin and Iowa, which are essential for Trump’s re-election bid in 2020. Trump will hear more public criticism for these moves than Xi will. There are no swing states in China.

Beijing’s second round of tariffs targets many U.S. goods, including cars, orange juice and soybeans–a product that accounts for trade worth $14 billion per year. This will have an even greater pocketbook effect on Trump’s base. And this is just the beginning.

Trump wants U.S. companies to have greater access to China’s vast marketplace. He wants a much lower trade deficit–and a political win. China needs access to the technologies that can help its economy make the leap from manufacturing powerhouse to cutting-edge creator of industries and jobs that flow from advances in artificial intelligence, robotics and advanced microchips. The U.S. may win some concessions on market access, but China won’t end the practice of forcing U.S. companies to share technology as the price of admission.

Whatever happens next, it’s clear that the Mar-a-Lago moment is long gone. 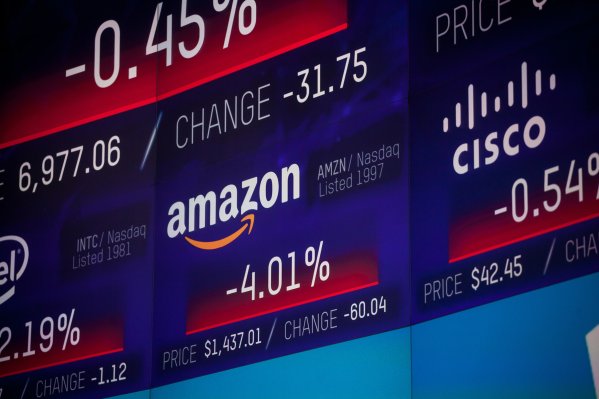 Tech Stocks and the Trump Tweet Effect
Next Up: Editor's Pick