The NBA Just Took Its First Big Step on the E-Sports Stage. But Will the Crowds Follow?

The Dallas Mavericks nabbed the top overall player in an NBA draft Wednesday afternoon in New York City. Mavs owner Mark Cuban gave him a congratulatory phone call, before NBA commissioner Adam Silver called his name as the number one pick. Wearing a snazzy purple bow tie, he ascended the stage at Madison Square Garden’s Hulu Theater, shook Silver’s hand, donned a Mavs hat, and posed for the cameras. He compares his game to two future Hall of Famers, calling himself a mix of Kyrie Irving — he can explode to the basket like the Boston Celtics star — and Chris Paul, since he distributes the ball like the Houston Rockets point guard. After all, he once dished out 55 assists in a single game.

Mavs fans, meet Artreyo “Dimez” Boyd, the first-ever draft pick for the NBA’s new e-sports enterprise, the NBA 2K League, which pits the world’s best players in the popular NBA 2K video game against each other over a four-month season starting in May. “Dimez” (pronounced “dimes”) is Boyd’s gaming handle; his avatar is an unstoppable 6’5″ point guard on the screen. (Boyd himself stands 6-feet tall.)

Seventeen of the NBA’s 30 franchises are fielding 2K League teams. In June’s 2018 NBA Draft, Dallas — which owns one of the worst records in the NBA — hopes to select the top overall traditional basketball player, to help turn the team’s fortunes around. But for now Dimez, the pixilated point guard for the Mavs Gaming squad, will have to do. After his selection, Boyd had a message for Cuban. “Hey, Mark, man, let’s go get this ring,” says Boyd, 23. “Let’s go get this championship.”

The NBA, like many other professional investors, is betting on the e-sports boom. Competitive video gaming was a $655 million global industry in 2017, according to research company Newzoo, a 32% increase over 2016. Newzoo forecasts the e-sports economy to grow to $1.4 billion by 2020. Strauss Zelnick, chairman and CEO of Take-Two Interactive, the company that makes NBA 2K, says 200 million people around the world consider themselves avid viewers of competitive gaming. NBA owners are pouring money into e-sports enterprises; Golden State Warriors co-owner Peter Guber, for example, has invested in Team Liquid, an e-sports organization that competes in popular battle and strategy games like StarCraft II and League of Legends. The Warriors started a League of Legends team in October.

Given all the excitement about e-sports, the NBA is looking to push its own product — basketball — in the video game space. Before the inaugural draft, more than 70,000 gamers tried to qualify for the league. Ultimately the 17 NBA 2K League teams each selected just six players, from a draft pool of 102 gamers.

Teams will square off in five-on-five NBA 2K hoops games, with each gamer controlling the player he’s created. (No women qualified for the final draft pool, which Silver admits is a concern.) The players will live and train in their team’s market; so Dimez, who’s from Cleveland, is headed for Texas. The league pays for housing, and the players selected in the first round will make $35,000 over six months. Everyone else earns a $32,000 salary.

Silver, who first witnessed the e-sports hysteria up close a few summers ago when he saw fans rollicking a sold-out Madison Square Garden at a League of Legends event, is taking 2K seriously. The first round of the 2K League draft was broadcast on NBA TV Wednesday afternoon. Silver says the NBA is in discussions with Twitch.tv, the video game streaming company Amazon bought for nearly $1 billion four years ago, to stream the 2K League games.

The commissioner already has the NBA flagship, the WNBA and the developmental G-League under his umbrella. Add 2K to the mix. “From the NBA’s standpoint,” says Silver, “this is our fourth league.”

But the question is whether fans will watch. E-sports grew on the backs of battle games, like League of Legends, which sell out arenas and draw millions of viewers around the world, especially in China and South Korea. Do these hardcore battle game fans have a desire to watch video game basketball? And do basketball fans want to watch pixels instead of the Indiana Pacers? The NBA already offers a premium product, so why would basketball fans tune into a LeBron James-like character on their computer screens, when the real LeBron already does it all?

Read more: Competitive Video Gaming Could Be The Newest Olympic Sport. Here’s What It Would Look Like

The NBA points to a 2K tournament it sponsored in 2017 as evidence of its e-sports potential. The league says that event drew 1.6 million viewers for the finals. “It’s certainly not blind optimism,” says Brendan Donohue, managing director of the NBA 2K League. “When we have done this, we have had success.” The NBA hopes all the young people playing NBA 2K will want to see the best gamers in action, just like, say, golfers love watching Tiger Woods on a Sunday. The NBA’s marketing muscle should also help its e-sports league get off the ground. Silver believes the NBA’s social media community, which he puts at 1.4 billion globally, is “fascinated with everything around this game.” That allows the NBA to develop the gamers “as unique personalities with their own following.”

Silver touts the 2K gamers as “a new generation of athletes, of NBA players,” but before you scoff at the notion of Dimez — as impressive as he is at the controller — as an NBA athlete, hear Silver out. “I see them as athletes, because I think it requires a unique combination of physical and mental skills to excel,” he says. Silver points to video game training regiments — some players practice 16 hours a day — as a sign of their dedication.

Johnathon “Fresh Prince JT” Fields, whom the Washington Wizards 2K team, Wizards District Gaming, selected 12th, urges skeptics to check out the competition. “Just like in any other sport, you win and you lose,” says Fields. “You look at that passion, we would have that passion in a real sport. It’s not fake passion. When I lose, I cry. In real life, when players lose, they cry. It’s a real thing.”

At the draft, the NBA certainly treated these gamers like big-time prospects. Stylists outfitted the gamers for their big moment. Dayne “OneWildWalnut” Downey brought a boring suit to New York from Southern California; when Blazer5 Gaming, the Portland team, selected him with the sixth pick, he took the stage in a polkadot shirt and socks, with Gucci shoes. “I feel more confident in this than my other suit for sure,” says Downey.

The NBA gamers might be brasher than the NBA players. “Oh, we’re making the playoffs, easily. You can put it in sharpie, ” says Franklin, the Kings selection. Dimez, the top pick, goes one better. He promises to win more titles than Michael Jordan, the greatest of all time, owner of six championship rings.

Dimez has spoken. Dallas may never be the same.

Most Popular on TIME
1
The Next Global Depression Is Coming and Optimism Won’t Slow It Down
2
Mark Zuckerberg Went Surfing in Plenty of Sunscreen and It's the Internet's Latest Meme Fixation
3
California Rep. Katie Porter Schools Congress With a White Board 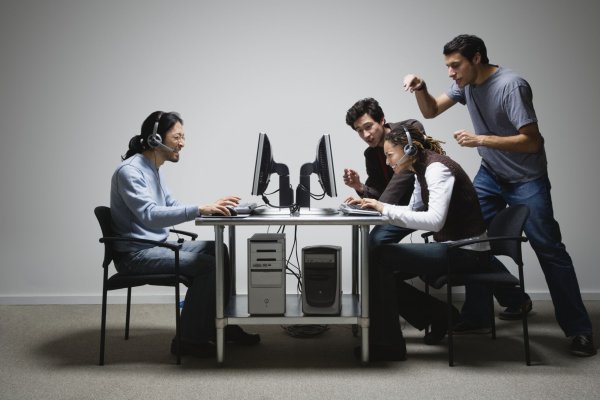