China Hits Back at Trump's Trade Tariffs With $50 Billion Hike on U.S. Goods

China announced boosted tariffs on U.S. goods including soybeans, aircraft and vehicles worth an estimated $50 billion Wednesday, retaliating for a similar scale hike on Chinese merchandise proposed by the Trump administration in response to alleged Intellectual Property theft, in the latest salvo of what business leaders fear may now escalate into a full-scale trade war.

On Tuesday, the Trump administration published a list of some 1,300 Chinese products it plans to slap with a 25% tariff. The Chinese Embassy in Washington immediately condemned the move, saying, “Such unilateralistic and protectionist action has gravely violated fundamental principles and values of the WTO.

“It serves neither China’s interest, nor U.S. interest, even less the interest of the global economy,” it continued, adding, “As the Chinese saying goes, it is only polite to reciprocate.”

That riposte took just hours to arrive. It’s notable that the many agricultural products listed would seem to target Trump’s base, and particularly the home constituency of current U.S. Ambassador to China Terry Branstad, the former governor of Iowa, one of whose principle exports is soya.

The U.S. tariffs, in turn, appear targeted, covering a wide range of products including aerospace parts, high-definition color video monitors, electromagnets used in MRIs, as well as machinery to make or process textiles. According to the South China Morning Post, U.S. officials identified items that “benefit from Chinese industrial policies, including Made in China 2025,” referring to China’s strategic gambit to dominate a raft of high-tech industries.

Reacting to the news on Twitter, Trump said, “We are not in a trade war with China, that war was lost many years ago by the foolish, or incompetent, people who represented the U.S. Now we have a Trade Deficit of $500 billion a year, with Intellectual Property theft of another $300 billion. We cannot let this continue!”

Trump has long justified increasing tariffs on China by saying that unfair trade practices by Beijing has cost 6 million American jobs and caused 60,000 factories to close. However, his campaign bluster had been tempered after coming into office, as the U.S. President has sought assistance from his Chinese counterpart, Xi Jinping, to thwart the threat of North Korea’s nuclear arsenal.

But the recent replacement of moderate members of Trump’s inner circle with China hawks seems to have rekindled the bellicosity of the stump. In late March, the real estate mogul announced tariff hikes of 25% on steel and 10% on aluminum that American manufacturers have slammed as increasing their production costs.

“We’re in a place where we thought we wouldn’t be back in 2017, when it seemed Trump’s mercantilist instincts had been turned by the ‘economic grownups,’” says Prof. Nick Bisley, an Asia expert at La Trobe University. “But he now seems to have around him enablers.”

Last year, U.S. imported goods from China were worth about $506 billion, with the trade deficit between the world’s two biggest economies rising to a record $375.2 billion. Trump based his volcanic campaign on the specious notion that this imbalance costs American jobs.

However, according to Rob Salomon, associate professor of international management at the NYU Stern School of Business, trade deficits may actually help the U.S. by flowing dollars back into the economy and keeping American interest rates low.

Given the huge trade disparity, the U.S. has the wherewithal to hit China harder via tariffs than the other way around, by virtue that American consumers buy more Chinese goods. But the fear is that Beijing may use American investment in China or geopolitical pressure points as an alternative cudgel.

On Tuesday, Xu Haidong, assistant to the secretary-general of the China Association of Automobile Manufacturers, told China’s state-run Global Times newspaper, “If there were a trade war, U.S. automakers are likely to discover quite quickly that their access to the Chinese market is limited.”

Were the current reciprocal tariff tit-for-tat to spiral, “U.S. exports and imports will fall, punishing millions of Americans, from hog farmer to low-income families living on tight budgets,” says Daniel Griswold, of the Mercatus Center at George Mason University. “We should advance our national interest by working cooperatively with our friends, not by provoking an escalation in wealth-destroying tariffs.”

Regarding geopolitics, Chinese sanctions enforcement has been key to getting North Korea Supreme Leader to agree to historic negotiations with South Korean President Moon Jae-in in April and Trump in May. Late last month, Xi hosted Kim for a pomp-filled “unofficial visit” — the young despot’s first with another world leader — despite a deteriorating bilateral relationship in recent years. Analysts say Xi may use this nascent rapprochement as another lever to pressure Washington.

“The hardening of American rhetoric on trade likely led Xi Jinping to open the door up to Kim Jong Un, with whom he’s not happy,” adds Bisley. “Under normal circumstances North Korea would pay a higher price for the kind of visit they had.” 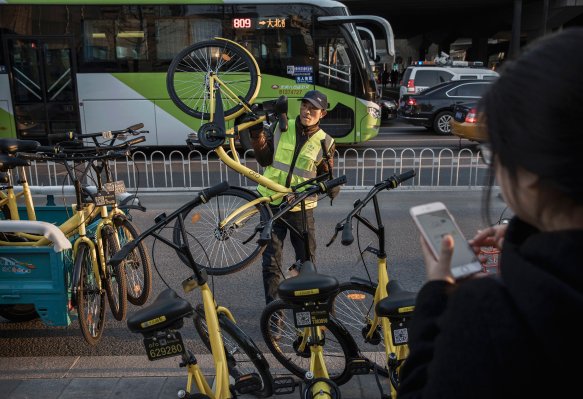 China's Bike-Sharing Fever Has Reached the Breaking Point
Next Up: Editor's Pick