When 26-year-old Clementine Jacoby thinks back on her childhood, she remembers using printed maps to navigate strange new cities — one of the many tools that smartphones have rendered largely obsolete. “My parents, I think, are just chronically bored,” she says in a conference room at Google’s New York offices. “We moved around a ton, and I was also sort of an agitated and ambitious kid and traveled a bunch on my own.”

It’s perhaps fitting then that, after a year-long stint as a circus performer and graduating from Stanford University with a degree in symbolic systems (a program that focuses on a combination of cognitive science, artificial intelligence, and human-computer interaction), Jacoby ended up working as a product manager for Google Maps. It’s a role that Jacoby feels like was made for her. “My brain is like a terrible filing cabinet, I can’t even remember my own phone number,” she confesses. “But it’s a very good processing machine.”

Much like a computer, which processes raw data and presents it in a format that humans can understand, Jacoby’s team at Google packages complex information in a way that video game creators can comprehend and use. Jacoby oversees a new product initiative at the search giant that lets mobile app developers integrate Google Maps’ model of the real world into their smartphone games through the popular game engine Unity, making it possible to turn actual buildings and locations into elements within a game. Google unveiled the product on March 14 and recently showcased it during the Game Developers Conference, an industry event for games creators. Upcoming games like Ghostbusters World, Jurassic World Alive, and The Walking Dead: Our World will be among the first to use Google’s new tech.

Maps are already a vital underpinning to many of the technology world’s best-known offerings, like ride-hailing apps and city guides. Google now believes they could also serve the foundation for the next generation of games and other augmented reality experiences, which blend digital information with the physical space around users. Much like how Mapbox provides digital mapping tools for a wide variety of apps and websites, ranging from The Weather Channel to travel guide publisher Lonely Planet, Google Maps could provide the data that takes augmented reality apps from interesting concepts to game-changing experiences. “It’s a building block,” says Jeffrey Hammond, a vice president and principal analyst at research firm Forrester. “You can’t do large scale experiences without great location data.”

While games like Pokémon Go already use augmented reality, the new Google Maps integration gives developers more precise insight into a player’s surroundings. “Instead of giving you the outline of a squiggly blob, we can tell you that blob is a park,” says Jacoby. “And now you can fill it with grass and trees and umbrellas.” In its GDC demonstration, Google showcased how blank renderings of Manhattan skyscrapers could be modified to look like a medieval village or a candy-themed city.

Google’s goal is to help developers create better location-based games by giving them more context to work with. It would be difficult, for example, to create a scavenger hunt app designed for players on the other side of the world in a city that the game developer may have never visited. Having that additional data could also make it easier for developers to help players avoid areas that aren’t meant for exploring, including spaces that could be potentially dangerous. Since Pokémon Go launched in July 2016, there have been several reports of players getting injured, including one instance in which two men fell off of a cliff in California.

Google’s new offering will use various signals to serve up locations that are ideal for wandering or holding social meet-ups. That requires Jacoby’s team to take a different approach when thinking about how people are using Google Maps, an app typically checked for driving directions or the nearest Starbucks. “It’s more about, ‘Where can people easily walk, and where is it good to stand for more than 30 seconds, and how does the world change when it’s raining outside,'” she says.

Approaching a problem differently can mean breaching your comfort zone — a challenge with which Jacoby is familiar, given her background as an aerialist who trained in two different circus troupes while taking a year off from Stanford. In fact, she often recommends circus work to young software engineers when they ask about how they can transition into product management. “Often people have the technical chops,” she says. “But things like circus teach you how to really be comfortable on stage. And that’s often what you’re doing in product management.”

If anyone knows how difficult it is to create a location-based game without a map system like what Google is offering here, it’s Pete Hawley. Now the CEO of Telltale Games, Hawley co-founded Red Robot Labs in 2011, which created smartphone games that incorporated real-world locations. To do so, Hawley and his team built their own maps from scratch by taking open-source location data and purchasing point-of-interest information and writing algorithms to filter out irrelevant parts of the data sets. When a player would open the game, the app would render the appropriate buildings and landmarks. With Google’s new product, none of that would be necessary. “Google solves an enormous problem, one that I’ve lived through,” says Hawley. “Then you get to just focus on the content. The headache of building all of that is something you just don’t really want to get into.”

Yet the bigger question may not be how to improve augmented reality location-based games, but whether or not they’ll stick around at all. Pokémon Go became an instant phenomenon when it launched in July of 2016. That’s hardly the case today, although dedicated fans continued to play the game a year later. Whether or not there will be another Pokémon Go-level hit remains to be seen. But Hammond believes games that involve some sort of simulation or scavenger hunt have the best chance at success. “If you think about the way in which the Pokémon world works, it was built for this large-scale experience,” he says. “It’s taking that digital metaphor and applying it to the real world.”

But that will present big challenges for developers. For augmented reality to take off the way companies like Apple, Google, and Microsoft seem to hope it will, there needs to be a variety of compelling apps and use cases for the technology. But developers and companies are more likely to invest their time and resources in augmented reality if it has already been widely embraced. Augmented reality developers have to find the right use cases for the tech, too. “You still have to ask yourself, ‘Why is this a better experience than using a [non-AR] app on my phone?'” says Hammond. “That’s part of the question that needs to be answered to go from where we are now to the next big user experience shift.”

Jacoby isn’t worried about interest in augmented reality tapering off anytime soon. “The mega-trend here is that you’re going to see location-aware mobile experiences everywhere,” she says. And the tech she’s working on could have big applications outside gaming, too — combining real time location data with augmented reality tech could prove useful in fields like construction, architecture, and travel. Indeed, Jacoby is already dreaming of a day when she can leave an AR postcard in Fiji for a friend to uncover with their smartphone years later. “The technology is there,” she says. “Go build it.” 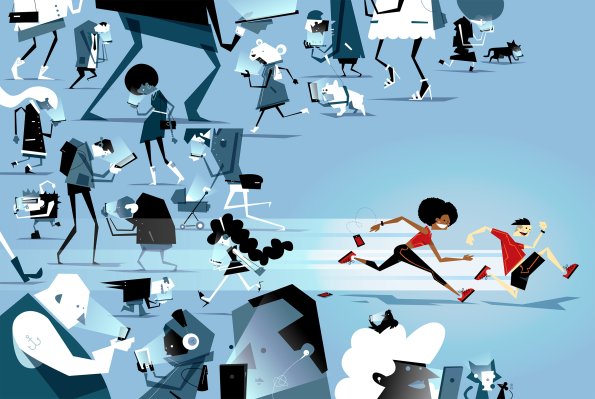 You're Addicted to Your Smartphone. This Company Thinks It Can Change That
Next Up: Editor's Pick