YouTube Shooter Was Angry About Company's 'Policies and Practices': The Latest

A suspected female shooter is dead and three others are injured after a mass shooting at YouTube’s headquarters in San Bruno, Calif., Tuesday afternoon, according to San Bruno police.

Aghdam was found dead inside the building with what appears to be a self-inflicted gunshot wound, San Bruno Police Chief Ed Barberini said at a press conference Tuesday afternoon. There is no evidence that she was acquainted with the victims of the shooting, according to police, and there is little information available yet about her possible motive. Law enforcement had previously said the incident was being investigated as a possible domestic dispute.

All 1,100 employees who work at the YouTube headquarters evacuated the building, which is about 10 miles from downtown San Francisco in the heart of Silicon Valley.

President Donald Trump has been briefed on the YouTube shooting. “Our thoughts and prayers are with everybody involved,” he wrote in a tweet just before 6:00 p.m. E.T. “Thank you to our phenomenal Law Enforcement Officers and First Responders that are currently on the scene.”

One employee said he first thought that he heard balloons popping. Others said they were roused from their usual afternoon work by the sounds of people running and a fire alarm. “There was one girl running, really, like hell,” said Alexander Uribe, a software engineer who was in the building. He said he realized soon after that there was an active shooter on the premises.

Vadim Lavrusik, a product manager at YouTube headquarters according to his verified Twitter account, tweeted that he “heard shots and saw people running while at my desk.” Lavrusik added that he was “barricaded inside a room with coworkers” before later tweeting that he was evacuated and safe.

Todd Sherman, another product manager at YouTube HQ according to his Twitter account, quoted Lavrusik’s tweet, writing, “We were sitting in a meeting and then we heard people running because it was rumbling the floor. First thought was earthquake.”

“We headed towards the exit and then saw more people and someone said that there was a person with a gun,” Sherman added in another tweet, before writing, “I looked down and saw blood drips on the floor and stairs. Peaked around for threats and then we headed downstairs and out the front.”

One Twitter user posted an image of what appeared to be people outside of the YouTube building with their hands up.

At 12:48 p.m., two minutes after the first 9-1-1 call, San Bruno police arrived on the scene. While they began searching for possible suspects, the officers encountered hundreds of employees evacuating the building.

After leaving YouTube, some workers harbored in a nearby shopping center. Others went to hide in the woods. Uribe said he and a few others jumped a fence and headed toward a freeway before they realized that the situation was under control.

One woman looked tearful and held pressure to her chin, which had been wounded and bandaged, as a man embraced her on a sidewalk near HQ. When asked what happened, he said she was too “traumatized” to speak.

At 12:53 p.m., officers found a female inside the building who had seemingly died as a result of a self-inflicted gunshot wound.

Google, the parent company of YouTube, addressed the incident in a statement from CEO Sundar Pichai. “We are very actively monitoring and working with local authorities and hospitals. It is with great sadness that I can tell you — based on the latest information — four people were injured in this horrific act of violence. We’re doing everything we can to support them and their families at this time.” Google did not immediately respond to a request for comment from TIME.

Chris Dale, head of communications at YouTube, delivered a statement at a press conference.

“We are an incredibly tight-knit community within YouTube, feels like a family. Today it feels like the entire community of YouTube and all employees were victims of this crime,” he said. “Our hearts go out those who suffered in this particular attack and our prayers are with them and their families.”

How many victims were there in the YouTube shooting?

Four people were injured in the incident, three of whom had gunshot wounds. Three victims were brought to San Francisco General Hospital, spokesman Brent Andrew said at a press conference Tuesday afternoon. One 36-year-old male is in critical condition. Two females, ages 32 and 27, are also being treated at the hospital. One, the 32-year-old, is in serious condition, according to AP, while the other is in fair condition. Another person, who was not shot, injured their ankle while fleeing.

Who was the shooter?

San Bruno police identified the shooter as Nasim Aghdam, 39, a San Diego resident, who wielded a handgun during the shooting. Police said Aghdam used a 9mm Smith & Wesson handgun that was registered under her name, adding that she visited a local gun range the morning of the shooting prior to entering YouTube’s HQ.

Authorities said Aghdam accessed YouTube’s facilities via a nearby parking garage. San Bruno Police Chief Barberini said investigators found Aghdam in a courtyard area inside the YouTube complex with what appears to be a self-inflicted gunshot wound. She was not transported to the hospital.

Barberini said police believe Aghdam’s motive was her unhappiness with YouTube’s “policies and practices.” Aghdam was an active YouTube user, according to a report by NBC’s Bay Area Investigative Unit, who had posted rants accusing the company of filtering or blocking her content to reduce her number of views. Her father, Ismail Aghdam, told local media outlets she was upset by what she believed was YouTube’s decision to censor videos she posted on the channel, preventing her from receiving advertisement revenue. Police said there was no evidence linking her to any individuals who worked at YouTube.

Ismail Aghdam had reported her missing on Monday, and warned police after she was found sleeping in her car that she “hated” YouTube and might be headed there.

How many people work at YouTube’s San Bruno headquarters?

More than 1,100 employees — including engineers, sales teams, analysts and more — work at YouTube’s San Bruno office, which is located about 10 miles south of San Francisco and about 26 miles north of Google’s headquarters in Mountain View. The multi-level facility, which was reportedly bought by Google in 2015, includes a basketball court, a lap pool and a slide connecting the second and third floors.

This story is developing and will be updated. 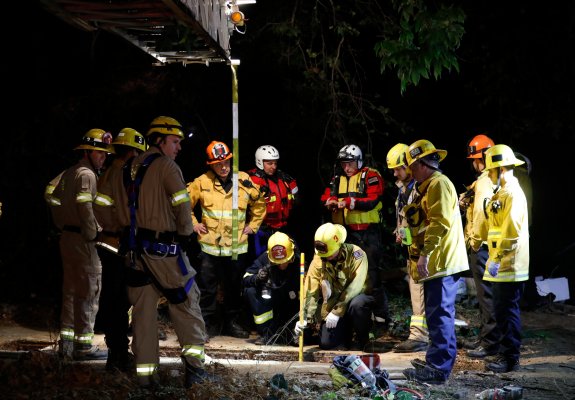 'I Was Just Praying to God to Help Me.' 13-Year-Old Boy Trapped in a Sewer Pipe for 12 Hours Describes His Harrowing Ordeal
Next Up: Editor's Pick