It’s only fitting that the first week of U.S. National Poetry Month in April coincides with what would have been the 90th birthday of the poet Maya Angelou, who died May 28, 2014, at the age of 86. And Google is celebrating Angelou’s birthday with a Doodle.

But while Maya Angelou best known today for her writing — as the author of more than 30 books and the recipient of more than 50 honorary degrees — she had many different careers before becoming a writer, and all before the age of 40, as TIME pointed out in her 2014 obituary. Angelou’s jobs included: cook, waitress, sex-worker, dancer, actor, playwright, editor at an English-language newspaper in Egypt, Calypso singer, and cast member of the opera Porgy and Bess. In fact, Angelou’s name is more of a stage name than a pen name; Angelou was born Marguerite Annie Johnson in St. Louis in 1928, but in the 1950s came up with “Maya Angelou,” which is a portmanteau of sorts, by combining her childhood nickname and a riff on her then-husband’s surname.

In a Google Doodle marking her April 4 birthday, Angelou can be heard reading “Still I Rise,” alongside testimonials from her son Guy Johnson, Oprah Winfrey, Laverne Cox, Alicia Keys, America Ferrera, and Martina McBride. The 15-time Grammy-winner Keys calls Angelou a “renaissance woman,” while 14-time Grammy nominee McBride says Angelou inspired her to write her own songs. Winfrey, who has called Angelou a mentor, says that “Maya Angelou is not what she has done or written or spoken, it’s how she did it all. She moved through the world with unshakeable calm, confidence, and a fiery, fierce grace and abounding love.”

1. I Know Why the Caged Bird Sings was Maya Angelou’s first book

As the world marks her birthday in 2018, Maya Angelou’s breakout work is particularly relevant to the national conversation. Long before the #MeToo and #TimesUp movements brought sexual assault into the national conversation, she wrote in her 1969 memoir about her own experience with sexual trauma, and how her mother’s boyfriend raped her when she was a child. He was convicted and imprisoned, and after his release he was beaten to death, a series of events that led her to stop talking for a period.

“I thought I had caused his death because I told his name to the family…” she wrote in a 2013 op-ed in The Guardian. “I decided that my voice was so powerful that it could kill people.”

In an interview with Winfrey, Angelou said that, while some places banned the book because of the rape scene, she also believed the book had saved lives by providing a model of endurance. “I just read someplace that after a woman had read Caged Bird, she realized she wasn’t alone,” she told the media mogul. As she once said in another interview, “the encountering may be the very experience which creates the vitality and the power to endure.”

“I loved the uniforms,” she once said to Oprah Winfrey, explaining why she wanted this particular job as a 16-year-old. Per her mother’s advice, she went to the city office that hired cable car conductors and sat there reading Russian literature until they agreed to hire her. Her mother got up with her at 4:00 a.m. for her daybreak shifts and trailed her in her car “with her pistol on the passenger seat” to keep an eye on her.

Maya Angelou during an interview in Washington, D.C. on June 3, 1974.
Craig Herndon—Getty Images

3. Maya Angelou was also one of the first African-American female members in the Directors Guild of America

She first joined in 1975, shortly after writing the 1972 film Georgia, Georgia about an interracial romance, but made her official directorial debut at 70 with Down in the Delta (1998). The movie is about a mother who sends her children away from Chicago to live with family in rural Mississippi so that they could learn about their roots.

For your security, we've sent a confirmation email to the address you entered. Click the link to confirm your subscription and begin receiving our newsletters. If you don't get the confirmation within 10 minutes, please check your spam folder.
Poet and novelist Maya Angelou at a Sickle Cell Disease Association of America program in Mobile, Ala. on Sept 12, 2006.
John David Mercer—AP

4. Angelou’s “On the Pulse of Morning” was only the second poem written for a Presidential Inauguration

Bill Clinton tapped her to be the second poet ever to read an original work at a Presidential Inauguration, following in the footsteps of Robert Frost, who recited “The Gift Outright” at John F. Kennedy’s inauguration.

She grew up in Stamps, Ark., about 30 minutes south of Clinton’s birthplace in Hope, and her work reminded the Democratic President of the grocery store that his grandfather managed in a predominantly African-American neighborhood. “When I read I Know Why the Caged Bird Sings, I knew exactly who she was talking about and what she was talking about in that book,” he has said.

Maya Angelou gestures while speaking during an interview at her home on April 8, 1978.
Jack Sotomayor—Getty Images

She boasts three Grammy wins (and five nominations) for best spoken word albums — in 1993, 1995 and 2002, for On The Pulse Of Morning, Phenomenal Woman, and A Song Flung Up To Heaven, respectively. But her awards don’t stop there. For example, she was nominated for a 1973 Tony Award for best Supporting or Featured Actress (Dramatic) for her role in Jerome Kilty’s 1972 play Look Away.

Considering her complicated life, it’s perhaps no surprise that Angelou wrote seven autobiographies, the last one being released just about a year before her death. As Angelou told TIME then, writing — though a career arrived at late in life — was what she did. 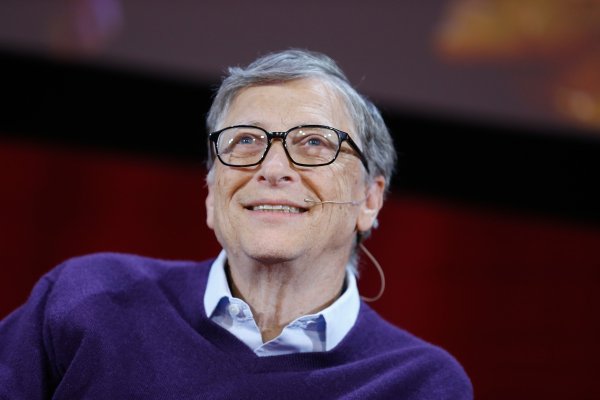 Bill Gates Says This Book Is 'One of the Most Important' He's Ever Read
Next Up: Editor's Pick