Will We See Dr. Ford in Westworld Season 2? Let's Discuss

As soon as Dolores (Evan Rachel Wood) blew Dr. Ford’s brains out in the Westworld Season 1 finale, kicking off the robot revolution, it seemed the show was telling us rather clearly that Anthony Hopkins’ theme park mastermind was done. But in a February interview with Entertainment Weekly, the show’s co-creator Jonathan Nolan hinted that we haven’t seen the last of him. Was Ford building a host version of himself all along? Was the bloodbath part of his masterplan all along?

Seeing Dr. Ford back in action in Westworld Season 2 may seem like a wild idea even by the series’ far-out standards, but as we head into the season premiere on April 22, there are reasons to believe it’s possible. Let’s take a look at the clues.

In the Westworld Season 2 trailer released in March (above), we learn that The Man in Black (Ed Harris) is determined to burn his favorite vacation spot down. Around the two-minute mark, we see a faceless man in a black vest wrestling with him. Could this be Ford’s ornery father in the unregistered Sector 17 cottage Arnold built for Ford as a way to remember his past? Better yet, is this a host version of the young Ford determined to take down the Man in Black?

The Man in Black was a money man, and Ford hated people like that. Ford also vocally opposed Arnold’s philosophy — trying to bootstrap consciousness, thus driving the hosts nuts. It’s not a ridiculous theory that Ford could live on in some form and be looking for a fight.

That Host Ford Was Building

In episode 7 of Season 1, “Trompe L’Oeil,” Theresa notices that Dr. Ford is building a new host from scratch in his secret area of the park. Who was this new host going to be? Probably not your average drink slinger. The new addition had to be important if Ford was overseeing it in his subterranean area. Some fans suggest he made a replica of himself out of white liquid and fake bones, an unbreakable bot that can look at a painting and come up with some really haunting stuff forever. Ford does have the ego.

Was he saying that he would never die, because he created a host version of himself?

Another possibility: When we see Dolores embrace her newfound free will to off Ford, she may have been shooting the completed host model of Ford, rather than Ford the man. We may have just been watching another classic Westworld illusion. Remember that Bernard was really Ford’s copy of Arnold.

More likely, Ford could be simply saying that his legacy will live on in his masterpiece, the park. As he was forging his final chaotic host rebellion story, he did seem to tell Bernard that his work was pretty much done.

“We’ve managed to slip evolution’s leash now, haven’t we?” he says to Bernard. “We can cure any disease, keep the weakest of us alive, and perhaps one fine day we might even resurrect the dead and call forth Lazurus from his cave. Do you know what that means? It means we’re done. That this is as good as we’re gonna get.” That does sound like man who’s getting so jaded about spinning the controls that he might be ready to set his pets free.

On top of that, Delos was doing everything in its power to force Ford out, however unsuccessfully. So maybe he just decided to relinquish his favorite thing — control — by ending his own life. Of course, he saw to it that he set the gears into motion to ensure Westworld would either lose its tourist appeal, or robots would run the shop.

In an interview with Variety, Nolan was very final. “Oh, he’s dead,” he said of the character.

There’s also the classy thank you Hopkins tweeted, which many read as a farewell:

We know time in Westworld is always hopscotching around. According to EW, another actor will play young Ford in flashbacks. If that’s the case, hosts might just access memories of his wisdom in critical times.

But the man does have a God complex. Just check out the way he plays with his table toys, and how they echoed the actual events of the finale. So who knows what he, and the show’s creators, may have cooked up for Season 2. 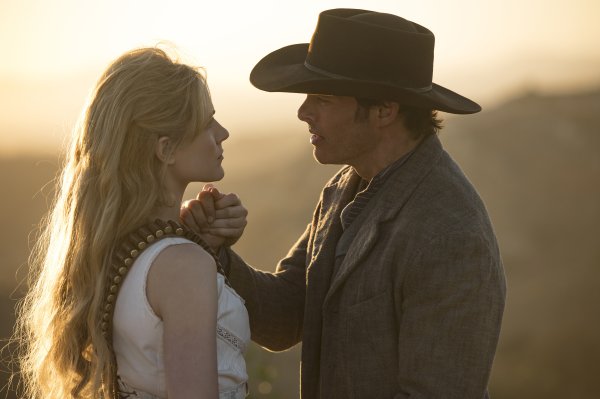 Here's Exactly Where Westworld Season 1 Left Off
Next Up: Editor's Pick