Martin Luther King Jr.'s Vision Was More Global Than We Remember. The World Mourned Him Accordingly

Many Americans tend to think of Martin Luther King Jr. solely as a leader of African Americans — or, even more narrowly, of southern blacks. We overlook his worldwide reach and his global vision.

Half a century after King’s death, that vision remains both strikingly relevant and sadly unrealized. Just as King hoped white Americans could simply treat African Americans as human beings, he believed that people across the world ought to view each other as brothers and sisters. In 2018, as a wave of angry nationalism sweeps across the globe and white supremacist movements gain strength, such basic precepts assume a radical cast.

King often pointed out that national boundaries were artificial. In September of 1964, during a visit to Germany, he thrilled audiences in both East and West Berlin with his talk of the need for brotherhood to a people divided by the Berlin Wall.

On the night of Sept. 13, a crowd of two thousand packed St. Mary’s Church in East Berlin while thousands more waited outside. Speaking from the pulpit, King called Berlin “a symbol of the divisions of men on the face of the earth. For here on either side of the wall are God’s children and no man-made barrier can obliterate that fact.” King continued: “Regardless of the barriers of race, creed, ideology, or nationality, there is an inescapable destiny which binds us together. There is a common humanity which makes us sensitive to the sufferings of one another.” He told of the black freedom struggle in the United States, offered a message of hope for those who endured state repression, and highlighted the cruelty and foolishness of the wall.

Later that year, he received the Nobel Peace Prize — proof of his glowing reputation abroad. He then called for a worldwide boycott against South Africa and intensified his criticism of the apartheid regime. For all of this, King became that much more of a hero to freedom fighters and dissenters across many continents. In Africa and Asia, and on both sides of the Cold War, King was regarded as a leader in the struggles against racism, poverty, colonialism and imperialism.

He burnished that reputation when he spoke forcefully against the Vietnam War. One year before his death, on April 4, 1967, King delivered his most famous antiwar address. In New York City’s Riverside Church, he proclaimed:

It was as though King had spoken directly to future leaders who might deny asylum to refugees, tear families apart with deportations, or campaign on the idea of building border walls between nations. “We can no longer afford to worship the god of hate,” King declared.

When King was assassinated in Memphis, on April 4, 1968, many citizens across the world experienced that loss just as powerfully as did African Americans. On every continent, throngs of people gathered in public squares and places of worship to honor Martin Luther King. At St. Andrews Presbyterian Church in Nairobi, Tom Mboya, Kenya’s minister of planning, read King’s final speech to an overflow crowd that included members of parliament. A visiting church worker from Indianapolis taught the audience the words to “We Shall Overcome.” The Pope hailed King during Palm Sunday Mass in St. Peter’s Basilica. In Paris, hundreds gathered at the Cirque d’Hiver, including labor leaders, intellectuals and heroes of the French resistance during World War II. They mixed homages to King with denunciations of the United States, so enraged were they by America’s racial injustice at home as well as its waging of the Vietnam War.

In London, the House of Commons passed a motion expressing outrage at King’s assassination. Soon the Labour government introduced a piece of anti-discrimination legislation known as the Race Relations Act. Thousands of Britons gathered on the steps of St. Paul’s Cathedral, where King had spoken in 1964, and spilled out onto the street to hear tributes to King. Speakers reflected on King’s life and performers led the crowds in song. The Times of London called King’s death a great loss “to a world that had come to love and respect him.”

In life and in death, King’s global vision resonated far and wide. As he said at Riverside Church in April 1967: “History is cluttered with the wreckage of nations and individuals that pursued this self-defeating path of hate….Now let us rededicate ourselves to the long and bitter, but beautiful, struggle for a new world.” King led the crusade for a world without walls. He foresaw that the struggle for this new world would be beautiful. He also warned that it would be long and bitter.

Jason Sokol is the author of The Heavens Might Crack: The Death and Legacy of Martin Luther King Jr., available now. 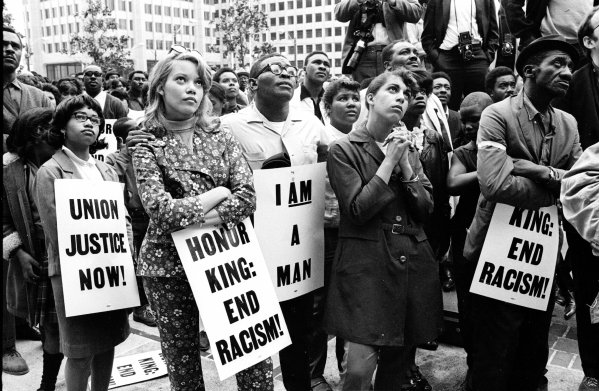 Commemorations in Memphis Show That How We Remember Martin Luther King Jr. Is Changing
Next Up: Editor's Pick