On Monday, China hit back at the Trump administration’s decision to raise duties on steel and aluminum imports, imposing tariffs of up to 25% on 128 American goods — including pork, wine and fruit — worth an estimated $3 billion.

Beijing said the hike was intended to “safeguard China’s interests and balance” losses caused by the new 25% tariff on steel imports and 10% on aluminum that Washington imposed from March 23, citing “national security.” President Trump has stated that trade wars are “good” and “easy to win,” while common consensus among economists is that all parties lose.

“It is time for Washington to bid farewell to the fantasy it has long been living in, a delusional world of make-believe whereby it imagines China as an unresponsive nation and tolerant toward U.S. tariffs,” it added.

For now, the dispute doesn’t appear to be spiraling, though that could change if the White House follows through with recent threats of an additional $60 billion of tariffs related to alleged Intellectual Property (IP) theft.

“If this is a Jujitsu match, I haven’t seen any major moves yet,” says Jeffrey Towson, a private-equity investor and a professor of investment at Peking University in Beijing. “This looks like grappling to me, but nobody’s choking each other out.”

Still, if this turns into a street brawl, China knows how to fight dirty — and frequently does. The Beijing government has a record of slapping tariffs on nations for political or retaliatory purposes. Moreover, China doesn’t even have to take explicit action to hurt other nations in the pocket — its people can do that themselves.

In addition, department stores run by South Korean conglomerate Lotte — which owns the land where THAAD was deployed — were forced to close in China on dubious “fire safety” grounds. Sales of Hyuandi and Samsung products also suffered. In fact, there were 43 cases of retaliation in the six months to last February, according to Korean news agency Yonhap.

Economic warfare will often spring organically. In 2008, Chinese nationalists urged a boycott against French supermarket chain Carrefour after Tibetan independence advocates protested the Olympic torch’s route through Paris. In 2010, by contrast, China declared an official boycott against Norwegian salmon exports after the Nobel Peace Prize was awarded to Chinese dissident Liu Xiaobo. Philippine banana imports were also banned over territorial disputes between Beijing and Manila in the South China Sea.

Japan is frequently targeted owning to territorial disputes in the East China Sea and historical grievances over abuses during Japanese occupation of China, with periodic boycotts of celebrated auto and electronics brands, such as Honda, Toyota and Sony. And the U.S. was even targeted in 2016 over a July 12 ruling by an international tribunal that rejected China’s historic claims to the South China Sea. Protesters targeted certain iconic American symbols — KFC and McDonalds — but were dispersed by police.

While such actions can be organic, they rarely gather steam without official backing, and it seems that the Beijing government never felt fully comfortable with officially sanctioning anti-American action. But judging by the increasingly jingoistic language of China’s state press, and how maoyi zhan, or “trade war,” is increasingly part of the everyday lexicon, that may soon change.

Worryingly for American firms, China not only represents a large chunk of current foreign earnings but also represents a key sector for future growth. Apple, the world’s most valuable firm, earned $17.9 billion in Greater China in the last quarter of 2017 — about 20% of global revenue. Trump has accused China of unfair trade practices that led 60,000 American factories to close at a loss of 6 million jobs. But the U.S. has never felt the devastation wrought by 1.3 billion angry Chinese consumers.

“We’ve never seen a Pan-American boycott like we’ve seen for other countries,” says Towson. “I’m curious if we will now.” 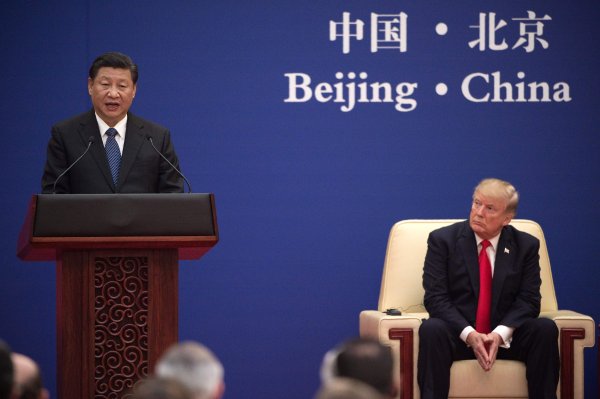 How China Could Use 'America First' to Its Advantage
Next Up: Editor's Pick