While courtroom drama is the backbone of daytime television, immigration courts are less well known — but very important to some people. “Like gefilte fish or the Insane Clown Posse,” explained John Oliver on Sunday night’s episode of Last Week Tonight, where he shed some light on the relatively unknown courts.

The country’s 60 or so immigration courts, which are governed by the Department of Justice and thus subject to shifting governmental priorities, are where immigrants go to argue their right to stay in the country. The courts must determine whether a claim is valid or whether they should be sent back to their country of origin. Oliver featured one young woman who was arguing her asylum claim in immigration court and worried that she would be killed if she was deported, which is horrifying, because as Oliver notes, kids should only have to worry about “sitting with the cool kids while they eat their Tide Pods.”

And as Oliver noted, many experts believe immigration courts are ill-equipped for the job of assessing asylum. As one pundit put it, it’s like trying “death penalty cases in traffic court,” which Oliver said was as incongruous as “doing coke in a Build-A-Bear Workshop.” Immigration courts are reportedly overloaded with cases. According to Oliver, more than 600,000 cases have piled up like “Bed Bath and Beyond coupons, New Yorker magazines and DVR episodes of Ken Burns’ Vietnam documentary.” Some courts attempt to make it through the backlog by rushing through cases, with Oliver clocking one trial at under two minutes from beginning to end.

That is particularly alarming, because one key difference between criminal court and immigration court, is that if you can’t afford a lawyer, you have to defend yourself. That holds true for adults who don’t speak the language, as well as children as young as two or three years old who are required to sit before immigration judges and argue their case. The practice can be so ludicrous that a lawyer made a series of videos interviewing three- and four-year old children and asking them questions about their citizenship and asylum requests. The results are as ridiculous as anyone who has interacted with a three-year old would expect.

To further prove the ridiculousness of forcing children to represent themselves in court — and sate American’s thirst for legal television shows — Oliver introduced “the stupidest new court show imaginable”: Tot Bench. It’s a courtroom drama starring children and Bob’s Burger star H. Jon Benjamin. “Is it stupid? Sure,” asks a voice over. “But is it any dumber than how America’s immigration courts are run? Barely.” 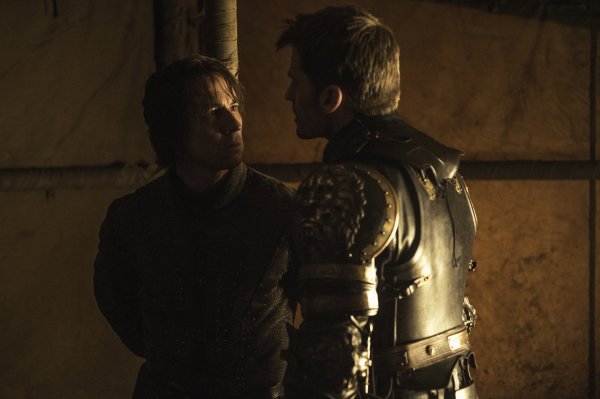 There's a Good Chance Game of Thrones Fans Will Never See This Character Again
Next Up: Editor's Pick