The Tiangong-1 made re-entry over the Pacific Ocean around 8:15 a.m. Beijing time (8:15 p.m. Sunday EST), with most of its parts burning up before crashing into the southern Pacific Ocean, the China Manned Space Agency said in a statement.

The space station began its uncontrolled free-fall earlier this year.

The 40-foot, 18,000-lb space lab, whose name means “Heavenly Palace,” was launched in September 2011 with a two-year lifespan to monitor the Earth’s surface temperature, sea ice and vegetation cover, according to the New York Times. Tiangong-1 was also planned as the first step in China’s ambitions to hold a permanent space station in orbit by 2022.

Chinese astronauts have been barred from the U.S.-led International Space Station since 2011 over “national security” concerns. But Beijing sent two crews of taikonauts, or Chinese astronauts, to Tiangong-1 in 2012 and 2013, and landed a rover on the Moon in 2014.

Chinese scientists lost contact with the station in 2016, severing their ability to control its trajectory, and in May 2017, China announced that that the lab had “ceased functioning” in March 2016 and would be allowed to tumble to Earth.

But the loss of Tiangong-1 hasn’t slowed China’s appetite for the stars — it’s successor, Tiangong-2, was launched in September 2016. 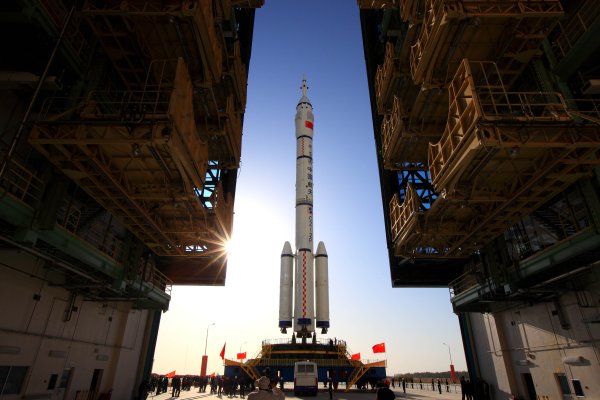 Chinese Space Lab to Fall to Earth
Next Up: Editor's Pick