Saudi Crown Prince Mohammed bin Salman wants the U.S. military to maintain a presence in Syria, despite President Donald Trump’s declaration that American forces will be pulled from the war-torn country in the near future.

“We believe American troops should stay for at least the mid-term, if not the long-term,” he told TIME Thursday in a wide-ranging interview.

Bin Salman, a 32-year old who last year disrupted the line of succession when he became next in line for the Saudi throne, has emerged as the most powerful Saudi ruler in decades. In addition to being selected as the crown prince, he serves as First Deputy Prime Minister, President of the Council for Economic and Development Affairs, and Minister of Defense.

Bin Salman, who is midway through a multi-city tour in the United States, said the American troop presence inside Syria is the last effort stopping Iran, Saudi Arabia’s arch-enemy, from continuing to expand influence with regional allies. U.S. forces inside the country also allow Washington to have a say in Syria’s future, he said.

Iran, through proxy militias and regional allies, will establish a overland supply route that leads from Beirut through Syria and Iraq to Tehran, Bin Salman said. The so-called “Shiite Crescent” would give Iran a greater foothold in a tumultuous region through a string of allies.

The U.S. maintains a remote base at Deir Ezzor in eastern Syria, in the middle of that corridor. It’s there that Special Operations forces coordinate with Syrian opposition fighters to wipe out the remaining ISIS fighters holed up in a series of towns along the Euphrates River and a stretch of desert straddling the Iraq-Syria border.

“If you take those troops out from east Syria, you will lose that checkpoint,” bin Salman said. “And this corridor could create a lot of things in the region.”

Bin Salman is the architect of the three-year old conflict in Yemen, pitting Saudi-backed forces against Iranian-backed Houthi rebels. The war has plunged the Arab world’s poorest nation into a humanitarian crisis which is worsened daily by famine, widespread disease and the deaths of civilians caught in the crossfire.

The Saudi leader made his remarks on Syria just hours after Trump told a cheering crowd in Richfield, Ohio that U.S. troops will soon be pulled out. “By the way, we’re knocking the hell out of ISIS,” Trump said. “We’re coming out of Syria very soon. Let the other people take care of it now, very soon. Very soon, we’re coming out.”

Trump’s comments were a departure from the previously stated positions of senior Pentagon and State Department officials, who have said the U.S. will keep troops inside the country to stamp out the last remaining fighters and prevent a new group from forming. An American service member was killed in Syria Thursday by an improvised explosive device, U.S. officials said Friday. A total of 14 U.S. troops have been killed fighting ISIS in Iraq and Syria since the operation began nearly four years ago.

There are currently about 2,000 U.S. troops working with Syrian Democratic Forces to re-capture territory from ISIS, which includes the militants’ self-proclaimed capital of Raqqa. ISIS is on the verge of defeat as a conventional military force. Although they no longer are in control of any major city in Iraq or Syria, the fighting is not over completely. But American forces are not inside the country to act as a counterweight to Iran, despite bin Salman’s wishes.

Trump’s recent appointment of John Bolton, who has been an outspoken critic of Iran’s regional dominance, as National Security Adviser may re-shape American foreign policy toward Tehran.

Backed by Iranian military aid and Russian airpower, Syrian President Bashar Assad has nearly defeated the Islamist-dominated rebel groups spawned in the chaos of Syria’s 2011 revolution. The insurgents still hold scraps of territory, but they have no hope of challenging Assad’s hold on power. As a result, Iran has extended its influence and reach inside Syria.

Bin Salman said Assad is not likely to be ousted from power. He said he hopes that Assad will not become a “puppet” for Tehran.

“Bashar is staying,” he said. “But I believe that Bashar’s interests is not to let the Iranians do whatever they want they want to do.” 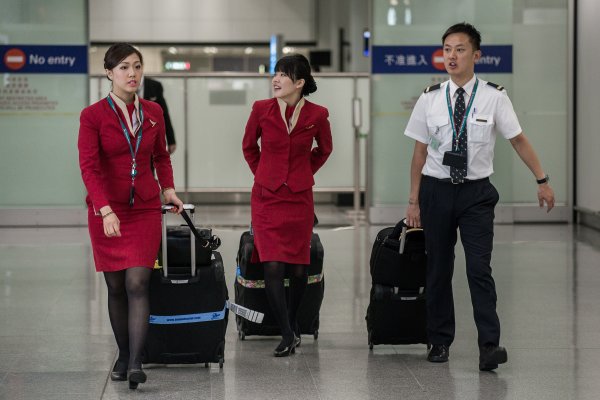