Prince Philip Married Queen Elizabeth. So Why Wasn't He Called a King?

Prince Philip’s life changed completely when Queen Elizabeth ascended to the British throne after her father’s death in 1952.

Overnight, the Duke of Edinburgh, who died on Friday, went from being a Naval officer and young husband to a man expected to perform royal duties and defer to his wife in the public eye—all under the title of Prince Consort rather than King of England.

Upon marrying the Queen, Prince Philip dropped his title as Prince of Greece and Denmark to become the Duke of Edinburgh. But when Queen Elizabeth took the throne, Philip did not become the King of England, thanks to a longstanding rule in the royal family which decrees that a man who marries a reigning queen will only be referred to as a Prince Consort.

Princess Elizabeth and Philip Mountbatten, Duke of Edinburgh, look at their wedding photographs while on honeymoon in Romsey, Hampshire, Nov. 1947.
Keystone/Hulton Archive/Getty Images

A ruling queen’s husband is called a Prince Consort because the title of King is only given to a monarch who inherits the throne and can reign. Therefore, the title of King will go to Prince Charles, who will succeed Queen Elizabeth.

In 1957, Philip, then known only as the Duke of Edinburgh, officially became a Prince after Queen Elizabeth bestowed the title upon him. The decision was famously depicted in the Netflix hit series The Crown—coming after a dispute about Philip’s importance and standing within his own home.

Women who marry into the royal family have to follow slightly different rules. The wife of a ruling King would take the title of Queen Consort, a symbolic role that would bar her from ruling as a monarch but refer to her as queen. For example, Kate Middleton is likely to become Queen Catherine when Prince William takes over the throne, though she would not actually rule as Queen. 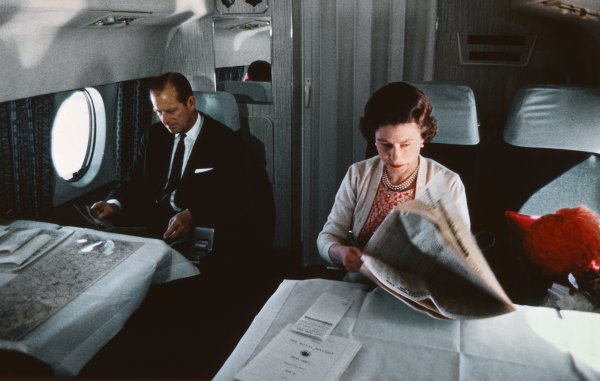 Inside Prince Philip and Queen Elizabeth's Complex Marriage
Next Up: Editor's Pick