Flight attendants for Cathay Pacific arrive at the international airport in Hong Kong on May 5, 2014.
Philippe Lopez—AFP/Getty Images
By Laignee Barron

Female flight attendants on Cathay Pacific have finally won the right to wear pants on the job after a four-year uniform fight.

The Hong Kong-based airline capitulated to union pressure this week, and agreed to do-away with its skirts-only policy for female crew members for the first time in its 72-year history, according to BBC.

But female staffers may be stuck in their skirts for up to three more years, as the changes will not take place until the next uniform upgrade.

According to the South China Morning Post, Cathay’s flight attendants have been lobbying for more gender-equal workwear for years, arguing that their clothing policy was not only retrograde, but also restrictive, leaving them in revealing outfits that make reaching or bending over difficult.

Prior to this week’s announcement, all four of Hong Kong’s carriers stipulated a skirts-only dress code for female crew, according to the Post. 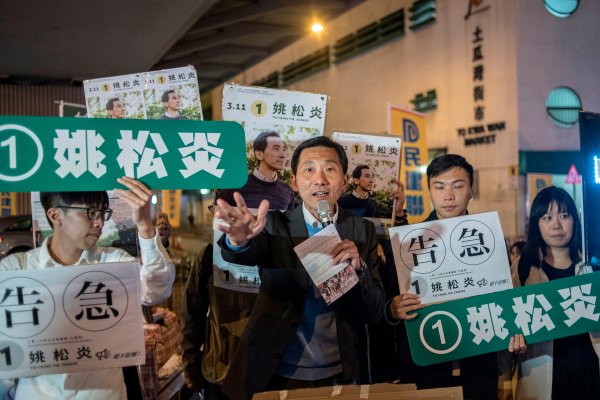 Hong Kong's By-Election Results a Blow to Democracy Movement
Next Up: Editor's Pick