In this photo illustration, the Airbnb company logo is displayed on the screen of an Apple iPhone 6 on Sept. 8, 2017 in Paris, France.
Chesnot—Getty Images
By Abigail Abrams

Planning to book an Airbnb on your next trip to China? Now the Chinese government will know where you stay.

Airbnb told its hosts in China this week that it would start sharing user data with Chinese government agencies to comply with the country’s regulations, Reuters reports. China requires all hotels to report guest information to the police, and travelers staying in private homes are supposed to register that information within 24 hours of arriving in the country.

With its new policy, Airbnb will automatically send data, including passports and booking dates, to the Chinese government instead of relying on individual hosts to submit guest information, according to Bloomberg. The announcement came in an email to hosts this week.

“Like all businesses operating in China, Airbnb China must comply with local laws and regulations, including privacy and information disclosure laws,” the company said in the email.

It added that the data collection is “similar to other hospitality companies that do business in China.”

Airbnb has faced tough competition from rivals like Tujia.com and Xiaozhu.com as it expands in China. Those companies also comply with the country’s strict rules.

In recent years, Airbnb has taken other steps to follow China’s regulations and succeed there. In 2016, it created a new business entity in China to handle its operations there and began storing data locally, which the country requires.

Other companies have made similar moves, with Apple announcing last month that it would transfer iCloud accounts registered in China to Chinese-run servers at the end of February.

Airbnb has been growing in China, with 150,000 active listings, according to Bloomberg. And while some users are likely to have concerns about data privacy under its new policy, the company said it is doing what it needs to do to continue operating in China. 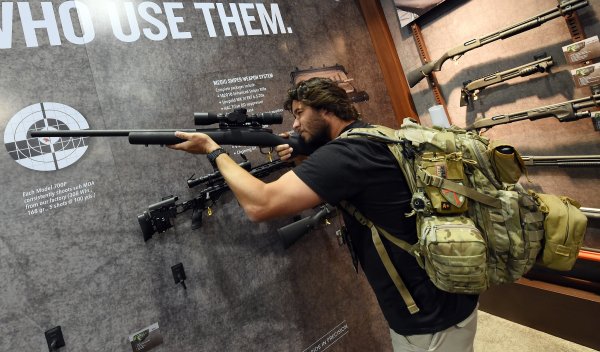 Gun Manufacturer Remington Files for Bankruptcy
Next Up: Editor's Pick