Nearly two decades passed after the April 4, 1968, assassination of civil rights leader Martin Luther King Jr. before his birthday — after a long and drawn out campaign — became a federal holiday in the United States. But the significance of celebrating his birth was not overlooked during his lifetime.

That fact is made clear from this exclusive clip from the HBO documentary King in the Wilderness, by filmmaker Peter Kunhardt. The film, which premieres on April 2 as the world this week marks the 50th anniversary of King’s death, traces the final few years of King’s life. In this troubled period, the gains of the early and mid-1960s slowed, and King faced opposition on all sides. His stance against the Vietnam War drew ire from the establishment, while his continued devotion to nonviolence angered radicals. So it was not a shock that, as journalist and Southern Christian Leadership Conference (SCLC) organizer Xernona Clayton relates in the film, King’s staff felt that their leader had become melancholy.

Clayton was asked to help cheer him up. The result was a birthday party.

In his book At Canaan’s Edge: America in the King Years 1965–68, Pulitzer Prize-winning historian Taylor Branch (who Kunhardt has said was instrumental in the decision to create the documentary) explained the context in which the party took place. King and his aide Andrew Young had just arrived home in Atlanta from Dallas and, though King had an early morning event at his church, they went to a meeting that day with dozens of SCLC staffers who had been told they would be receiving important instructions for their work in the then-ongoing Poor People’s Campaign, a major King-led push for economic equality. King seemed on edge and slightly defensive, as he called on his team to “bring to bear all of the power of nonviolence on the economic problem.” Then, as Branch relates, the meeting began to wind down:

As the video record of that day preserves, those present jokingly called the Jan. 15 occasion “Martin Luther King’s Day,” noting that they celebrated in the vein of those who marked Abraham Lincoln’s birthday as a holiday. In fact, 50 years after King’s death, while Lincoln’s birthday is celebrated by many, only two Americans have had their birthdays turned into federal holidays — George Washington is one, and the other is Martin Luther King Jr. 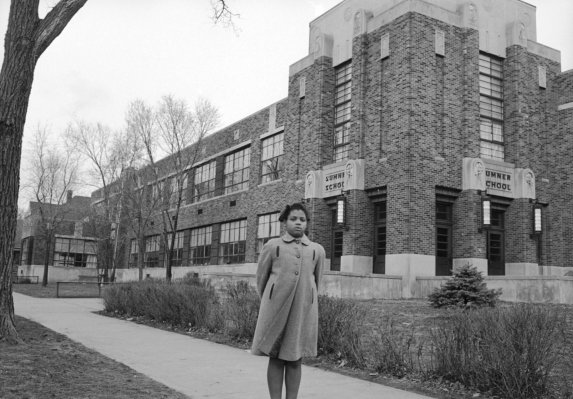 Linda Brown's Legacy and the Hidden Ripple Effect of 'Brown v. Board of Education'
Next Up: Editor's Pick