Russia said it’s expelling 60 U.S. diplomats and closing the American consulate in St. Petersburg, and will retaliate in kind to other countries that ousted its envoys after the poisoning of a former Russian double agent in England.

Russian Foreign Minister Sergei Lavrov said the measures against the U.S. “include the expulsion of the same number of diplomats” as the Russian envoys ordered out by President Donald Trump.

The measures came in a crisis over a nerve-agent attack on Sergei Skripal and his daughter Yulia that the U.K. government is blaming on Russia. While the Kremlin’s action underscores the tense relations between Washington and Moscow, the use of a customary tit-for-tat response suggested that President Vladimir Putin isn’t looking to escalate the situation.

But the U.S. quickly dismissed the notion that Russia was entitled to take mirror-image action.

“There is no justification for this response” because Russia was “responsible for that horrific attack on the British citizen and his daughter,” State Department spokeswoman Heather Nauert told reporters in Washington. Saying the U.S. isn’t ruling out further action against Russia, Nauert said, “The Russian Federation is not interested in a dialogue on issues that matter to our two countries.”

Russia had vowed retaliation after the U.S., NATO and 25 allies including Germany and France expelled about 130 Russian diplomats this week in support of the U.K., which kicked out 23 Kremlin envoys on March 14.

While the scale of the coordinated action was unprecedented, the decision of Paris and Berlin to limit expulsions to four diplomats each, in contrast to the 60 ordered out by the U.S., has stoked expectations in Russia that France and Germany still want to work with Putin. Russian officials have been careful to cast the confrontation as one with the U.S. and the U.K. rather than with Europe as a whole.

“The Kremlin is confident that it could reach a deal with Europe if not for the malicious influence of the U.S. and U.K.,” said Valery Solovei, a political scientist at the Moscow State Institute for International Relations.

Russian Deputy Foreign Minister Sergei Ryabkov met with U.S. Ambassador Jon Huntsman and handed him a note of protest against the “revolting and groundless” demands from the U.S. authorities for 60 Russian diplomats to leave the country, the Foreign Ministry said on its website.

If further “hostile actions” against Russian diplomatic and consular offices in the U.S. continue, additional steps will be taken against its staff and facilities in Russia, the ministry said.

Trump drew bipartisan praise in Washington this week for the expulsions, days after he was criticized for congratulating Putin on his re-election in a phone call with the Russian leader. The American president has been faulted by lawmakers for voicing continued optimism about improving relations with Putin while questioning the finding of U.S. intelligence agencies that Russia interfered in the 2016 U.S. presidential election. 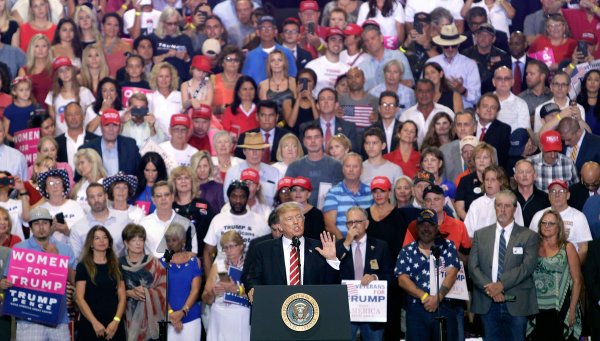 Do Not Doubt Donald Trump. He Could Easily Be Reelected
Next Up: Editor's Pick