After a week dominated by death and mourning in France — first, from a terrorist attack in the country’s south, and then after a horrific murder in Paris — the French are once again anguishing over an issue that has returned in full force: Is the country beset by rising, virulent anti-Semitism?

While the two incidents were unrelated and hundreds of miles apart, the French, including President Emmanuel Macron, drew a connection between the two, as a sign of what Macron, addressing a solemn funeral ceremony on Wednesday for the gendarme officer killed in the terror attack, called a “barbaric obscurantism.” Four people died last Friday when a 25-year-old Moroccan-born Frenchman opened fire in a supermarket in Provence, after shouting “Allahu Akhbar,” or “god is great.”

That same day, Mireille Knoll, 85, was stabbed 11 times and her body burned in her apartment in eastern Paris; two men, aged 22 and 29, are being held for committing an anti-Semitic murder. Thousands of people marched silently through Knoll’s neighborhood on Wednesday, some holding banners that read “killed for being Jewish” — echoing a phrase from the Nazi occupation of France in the 1940s, which Knoll had survived. Her murder came exactly a year after the killing of Sarah Halimi, 65, a French Jew who was beaten in her apartment just two miles from Knoll’s neighborhood, and then thrown out the window. Knoll was the 11th French Jew murdered in an anti-Semitic attack in the past 12 years.

But do the killings suggest entrenched anti-Semitism in France, and have they made life untenable for Jews in the country? In interviews with French Jews on Thursday, most say those answers depend heavily on where one lives, and that it is possible to live in France with little sense of anti-Semitism.

“If you are a practicing Jew and visible, if you wear a kippa (skullcap) and live in not such a nice neighborhood, then it is nearly impossible not to be confronted on an everyday basis with anti-Semitism,” says Simone Rodan-Benzaquen, the Europe director of the American Jewish Committee. Although she describes anti-Semitism in France as “very serious,” she says she herself has not experienced a single act. “I am not a practicing Jew, and I live in a nice neighborhood in the 7th [district of Paris],” she says. “It is a parallel reality.”

Official statistics show a complicated picture of racist incidents, and suggest that other minorities, such as Muslims, are regularly harassed and are at least equally at risk of hate crimes as Jews.

In 2016, there were dozens of attacks against mosques, and violent threats against veiled Muslim women in the streets, according to the latest figures collected by the Organization of Security and Cooperation in Europe, or OSCE. A recent report on hate crimes by France’s National Consultative Commission for Human Rights show widespread anti-Muslim feelings and a “strong correlation” with anti-immigrant sentiment. Muslims comprise a large proportion of recent migrants to Europe from Africa and the Middle East. Despite the rise in anti-Semitic incidents over the years in France, says the commission’s report, “Muslims remain the least accepted minority.”

Those stark divides run counter to France’s attempts to instill a uniform sense of citizenship among its 65 million people, a core principle of the country. Under the national education curriculum, for example, all children are required to learn about the Holocaust, including the fact that French citizens helped organize the mass deportation of Jews to Nazi death camps in 1942, an event that has evoked decades of soul-searching among the French.

But Jewish groups say the reality is different, and whether children learn such lessons depends on where they live.

Earlier this year, my son’s sixth-grade class went on a school outing to the Jewish Museum in Paris, and the few Jewish children in the class leaped to answer questions about Judaism. On Wednesday, the children stood for a minute’s silence in their classrooms to mark the murders of both Mireille Knoll and a police officer who was killed in last Friday’s terror attack after swapping places with the gunman’s last hostage.

But while such lessons might instill tolerance, the experience is different elsewhere, particularly in poorer neighborhoods.

In schools where students are largely Muslim, teachers often skip the lessons in the curriculum that focus on the Holocaust and Jewish history for fear of being targeted as overly sympathetic to Jews, according to Robert Ejnes, Executive Director of the Representative Council of Jewish Institutions in France, or CRIF. “They believe it is dangerous to them physically,” he says.

On Thursday, a teacher in a public school in Seine-Saint-Denis, a poorer district on the northeast edge of Paris, told BFM Television that, although his ninth-grade curriculum included lessons about the Holocaust, his students, mostly Muslim, have well-entrenched ideas about the subject, and few around them to challenge them. “Many Jewish families have moved,” he said. “There are fewer and fewer Jewish students in school.”

In fact, France’s ethnic composition makes for a potentially combustible mix. It has Europe’s biggest Jewish population and its biggest Muslim population. Yet Jews comprise less than 1% of France’s 65 million people — just one-tenth of the 5 million or so French Muslims.

In many neighborhoods, even in diverse Paris, the two minorities are increasingly living in separate worlds. In the suburbs around Paris, for example, “there are areas where not a single Jewish family lives,” says Ejnes. Ejnes, 60, says that when he grew up in the 1970s, Paris felt far more of a melting pot than now. “About 95% of Jewish children went to public school then,” he says. “Now it is less than 30%.”

Indeed, anti-Semitic graffiti, let alone physical attacks, are exceedingly rare in richer neighborhoods of Paris. Even so, Rodan-Benzaquen says she and others feel a strong need to conceal their Jewish identity from strangers.

For that reason, mezuzahs, the miniature prayer scrolls that millions of Jews in the U.S. and elsewhere display on their front doorposts, are rarely visible in France. “I put my mezuzah on the inside of the door,” Rodan-Benzaquen says. Her concern is about hostility from casual visitors, like “the postman, the DHL or UPS deliverer,” she says. She stopped short of naming what ethnicity those service workers might be. “Why take the risk? I have two kids,” she says. “It crosses all our minds.” She says that when she sees a boy in the street wearing a skullcap, “I get nervous. I am scared for him.”

For some, outward displays of Judaism Jewish are an act of defiance. “I’m not afraid to put a mezuzah on my door,” says Sacha Ghozlan, president of France’s Union of Jewish Students. “We are French citizens,” he says. “We don’t need to hide ourselves to be Jewish.” But Rodan-Benzaquen insists her anxiety is well-founded. She points out that 40% of violent racist attacks in French are directed at the tiny Jewish minority. The French Ministry of Interior has reported that about one-third of hate crimes in 2017, both violent and non-violent, were anti-Semitic. 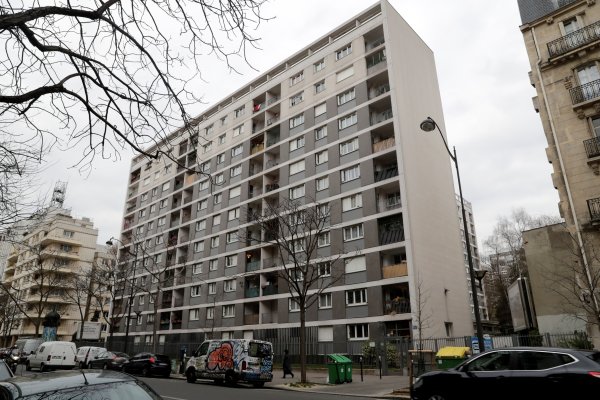